By Dr Ananya Mandal, MDOctober 18, 2017
An emergency blood transfusion mandates matching of the blood types so that the donor and the recipient are compatible in their blood types. There is no other matching between the blood bag and the recipient – race, ethnicity, religion, gender etc.
A new study however finds that gender of the donor and recipient should be matched. This is the first time that a study claims there could be a mismatch if a male person receives blood from a woman who has been pregnant before. The study was published yesterday (17th of October 2017) in the JAMA - The Journal of the American Medical Association. 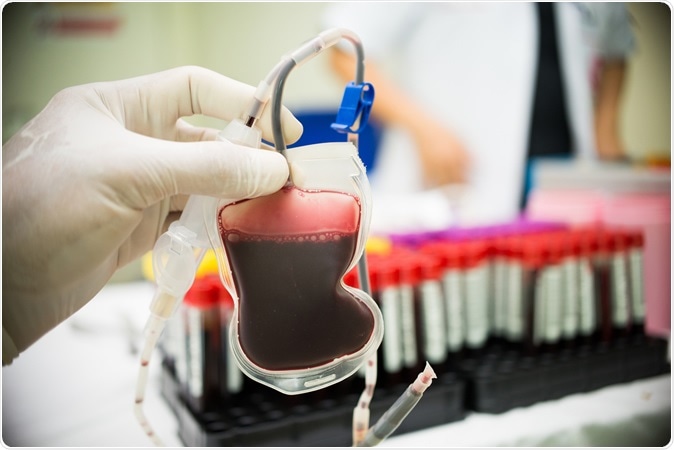 Blood donation. Image Credit: Panyawat Bootanom / Shutterstock
The team of researchers included thousands of transfusion patients in the Netherlands and noted that men under the age of 50 years were 1.5 times more likely to die within three years, if they had received a red blood cell transfusion from a female who has been pregnant before. This translates into 2 percent overall risk of death annually they find. The team of researchers worked closely with the American Red Cross to arrive to this conclusion.
They added however that this was not yet a mandate and a definitive finding and should be treated with caution. However experts believe that once out, this study could have long term consequences in terms of how donor and recipient blood is matched and transfused worldwide.
Gustaf Edgren, an associate professor of epidemiology at the Karolinska Institute and a hematologist at Karolinska University Hospital in Stockholm, in an editorial accompanying the paper said that till date their own research has failed to find any difference that sex of the donor makes in the clinical outcome of the patient. He added that this study would have clinical relevance and what is happening here needs to be found out.
However the team of researchers who authored this study conducted four different studies to the same effect. Further the teams belonged to different countries and health set ups using different unique data collected by them. Each of the results were different but the results were all same – sex mismatch did not bode well for the recipient.
There were 31,118 patients who received a total of 59,320 red blood cell transfusions while being admitted in six Dutch hospitals between 2005 and 2015. Among the donors, only 6 percent were women who had been pregnant before they had donated the blood used for the transfusion. A further 6 percent of women had never been pregnant before donation of the blood.

In the study population a total of 3,969 blood recipients, or 13 percent deaths occurred during the study. If men had been given female blood, the death rate was 101 per 1000 recipients in a year. When men received blood from other men, the death risk was 80 deaths per 1000 recipients and the death risk was 78 per 1000 recipients if the men had received blood from a woman who had never been pregnant.
Among women recipients of the blood the death risk was 74 deaths per 1000 recipients annually when the blood came from a previously pregnant woman and 62 per 1000 yearly if the blood came from a male donor.
Henrik Bjursten, a professor in the department of cardiothoracic surgery, anesthesia and intensive care at Lund University/Skane University Hospital in Stockholm, who assisted in the study, said that male-to-female and vice versa transfusions are not likely to have good outcomes. He added that the possible mechanism behind this is not clear and that needs to be found out. He explained that his own experience with cardiac surgery patients who received blood from the opposite sex has been similar as this study concludes. He noted that if there is actual harm, we cannot conduct human clinical trials where one group is given a sex mismatched blood transfusion – that would be unethical.
One of the reasons why men do not respond well to blood of women who have been pregnant could be some immune factor that the women develop in their blood. This immune factor could be making the male recipient’s body reject the donated red blood cells especially among younger males.
Females who have had sons could have developed certain antibodies to the Y chromosomes in the male DNA of their unborn sons. This could be part of an immune reaction during pregnancy. This could be the factor that was interfering with the recipient’s blood later when the blood is transfused. However, this study did not have the information about the gender of the child the women donors had borne. Thus the theory could not be verified. Senior author of this study Rutger Middelburg of Leiden University Medical Center, also agreed with this explanation but added that this was not yet proved.
Mary O’Neill, interim chief medical officer of the American Red Cross, said in a statement that this study “needs confirmation as conflicting studies also exist…As further research is required, we do not anticipate a change to the standard blood donation criteria or current conservative transfusion practices at this time.
The Red Cross will closely examine subsequent studies on this subject to ensure the ongoing safety and availability of the blood supply.”
Source:
https://jamanetwork.com/journals/jama/article-abstract/2657377
Publicado por salud equitativa en 13:32