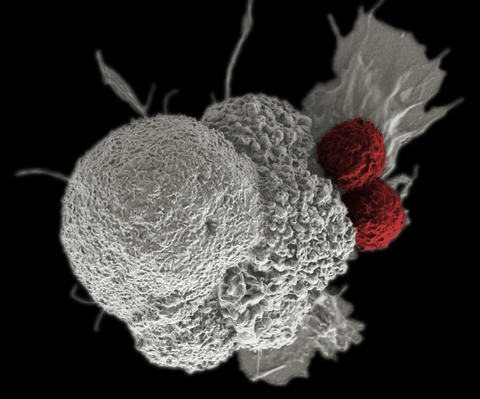 This electron micrograph shows an oral squamous cancer cell (white) being attacked by two cytotoxic T cells (red). The tumor-specific T cells were developed from the patient’s own immune system, a “personalized cancer vaccine” like those that may be developed in the future with the help of NIST’s standardized human genomes.
Credit:

GAITHERSBURG, Md.—With the addition of four new reference materials (RMs) to a growing collection of “measuring sticks” for gene sequencing, the National Institute of Standards and Technology (NIST) can now provide laboratories with even more capability to accurately “map” DNA for genetic testing, medical diagnoses and future customized drug therapies. The new tools feature sequenced genes from individuals in two genetically diverse groups, Asians and Ashkenazic Jews; a father-mother-child trio set from Ashkenazic Jews; and four microbes commonly used in research.
NIST issued the world’s first genome reference material (NIST RM 8398)—detailing the genetic makeup for a woman with European ancestry—in May 2015. Together, all five RMs serve as a collection of well-characterized, whole genome standards that can tell a laboratory how well its DNA sequencing processes are working by measuring the performance of the equipment, chemistry and data analysis involved.
The latest reference materials are:
The individual human RMs provide a baseline for comparing and contrasting genes from distinctly different lineages while the Ashkenazic trio set aids the analysis of genetic links between family members. The bacterial genomes come from species that challenge the technical performance of sequencing methods and have been determined by the Food and Drug Administration(link is external) (FDA) to have significant relevance to the research of public health issues such as food contamination, antibiotic resistance and hospital-acquired infections.
The three individual and one family set of standardized human genomes were created by NIST and its partners in the Genome in a Bottle consortium(link is external), a group that includes members from the federal government, academia and industry. The consortium is managed by the Joint Initiative for Metrology in Biology(link is external) (JIMB), a collaboration between NIST and Stanford University. Through its effort to develop, produce and distribute a suite of genome RMs, the consortium is providing medical and research laboratories worldwide with the tools they need to advance clinical applications of whole genome sequencing, and the FDA with the ability to conduct science-based regulatory oversight of the technology.
Reference materials are critical to properly evaluate the next-generation of gene sequencing and genetic testing methods that will increase the reliability and effectiveness of precision medicine (also known as “personalized medicine”), in which a person’s genetic profile is used to create treatments and therapies unique to that individual.
Sequencing devices take long strings of a person’s DNA and randomly chop them into small pieces that can be individually analyzed to determine their sequence of letters from the genetic code (A, C, G and T representing the four key components of DNA that code for protein production in living organisms: adenine, cytosine, guanine and thymine). The sequenced pieces can then be compared to a well-defined "reference sequence" to identify differences between the two codes. The differences reveal where mutations may have occurred in specific genes.
However, biases and "blind spots" for certain sequences contribute to uncertainties or errors in the sequence analysis. These biases can lead to hundreds of thousands of disagreements between different sequencing results for the same human genome.
To better understand these biases, laboratories can now compare their DNA sequences to those obtained from the DNA in any or all of the human genome RMs. The reference materials have been extensively characterized with multiple techniques, with the results weighted and analyzed to eliminate as much bias and error as possible.
The new NIST human genome RMs increase the ability of DNA sequencing laboratories to be more confident in their reporting of true positives, false positives, true negatives and false negatives, and therefore, significantly improve genetic tests used for disease risk prediction, diagnosis, and progression tracking. They also can be used with tools developed by the Global Alliance for Genomics and Health Benchmarking Team(link is external) to further raise that confidence level.
Similarly, the standardized microbial genomes in NIST RM 8375 can be used to assess the performance of high-throughput methods for microbial DNA sequencing.
All five of the NIST reference materials are available for purchase from the NIST Standard Reference Material program. Each RM sample is characterized for homogeneity (ensuring that each vial contains similar DNA) and stability (ensuring that the DNA ordered now will be comparable to samples ordered in the future). The original sources for the RMs are from the Personal Genome Project(link is external), whose cell lines are hosted at the Coriell Institute for Medical Research(link is external).
Future additions to the RM collection may include whole genomes from persons with Hispanic, African and mixed ancestries, as well as a set containing sequenced genes of both malignant tumor and normal cells from the same individual.
As a non-regulatory agency of the Commerce Department, NIST promotes U.S. innovation and industrial competitiveness by advancing measurement science, standards and technology in ways that enhance economic security and improve our quality of life. For more information, visitwww.nist.gov.
Publicado por salud equitativa en 7:15