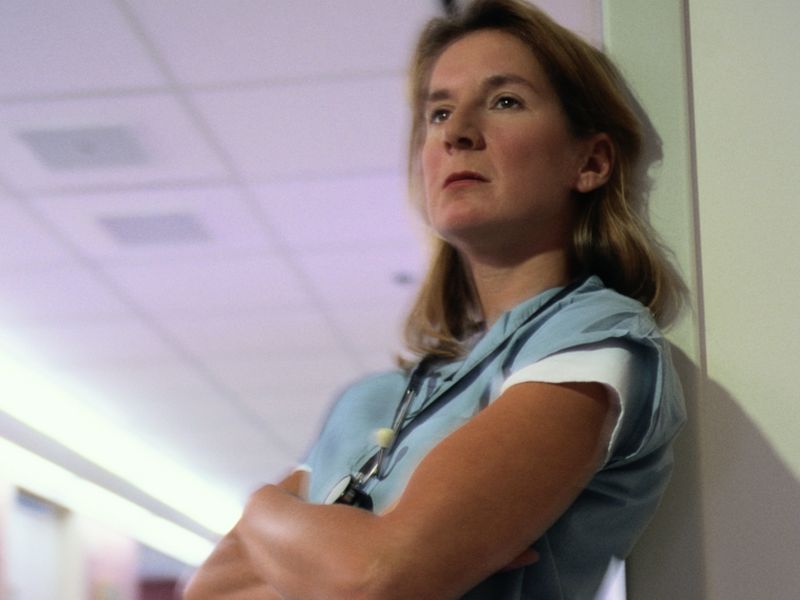 TUESDAY, Sept. 27, 2016 (HealthDay News) -- Wary of the stigma of a mental health diagnosis and its toll on their careers, physicians often avoid getting help for depression and other mental illnesses, a new survey suggests.
Researchers surveyed more than 2,000 female physicians to assess treatment barriers.
Nearly half of those surveyed thought they met the definition for mental illness at some point in their careers, but didn't seek treatment.
Many survey respondents said they felt they could persevere on their own or didn't have time to seek care.
However, when researchers examined all of the reasons for skipping care, more than two-thirds were stigma-related. Many doctors said getting diagnosed would be embarrassing or shameful, or they believed they would be judged by others, deemed incompetent, or have their privacy and autonomy violated.
"I have definitely suspected a lot of people were feeling the stigma, but I was really astonished by how high the numbers really were," said Dr. Katherine Gold, the study's lead author. She's an assistant professor of family medicine and obstetrics and gynecology at the University of Michigan Medical School in Ann Arbor.
The researchers believe the study is the first to ask doctors about mental health questions that pop up on most state medical licensing applications.
The concern is that some state reporting requirements are so sweeping that they cover prior illnesses that have been resolved, including postpartum depression, or conditions that are well controlled, the study authors noted.
The study involved female physicians, but Gold said stigma and mental health reporting issues apply to both men and women. She suspects that even more male physicians would hesitate to seek mental health care because of stigma-related concerns.
For the study, members of a closed Facebook group of physicians were invited to take the survey. The investigators chose the group because its roughly 57,000 members, who are also mothers, represent a variety of specialties -- not because they were women.
The anonymous survey ran from February to April 2016. The researchers posed 20 quantitative questions and four open-ended questions about mental illness treatment and reporting. More than 2,100 physicians from all 50 states and the District of Columbia responded.
One in three women said she had been diagnosed with a mental health condition at some point since medical school. But only 6 percent of those who were ever diagnosed or treated for a mental condition reported that information to the state, the survey findings showed.
Some doctors even admitted to seeking care in a different city or health system, paying cash for mental health-related prescriptions or writing their own prescriptions for medication.
"In my own practice, I'll sometimes see physicians who have anxiety and depression, and most of the time they are very worried about my putting that in their record or having that diagnosis appear," Gold said.
Three-quarters of the women who had been diagnosed or treated said their condition didn't pose a potential safety risk to patients.
One physician who disclosed her well-controlled depression reported having to meet with a medical board-approved psychiatrist who charged $1,000 for a 15-minute visit at Starbucks.
"Taking care of one's mental health is the best way to keep practicing safely and competently," said Dr. Christine Moutier, chief medical officer at the American Foundation for Suicide Prevention.
"But the way medical boards ask questions about doctors' mental health versus physical health are completely misaligned. These broad questions, even about conditions that are well managed, threaten doctors' occupational viability," she said.
That leads some doctors to simply avoid care or seek care in dysfunctional ways, Moutier noted.
The study authors pointed out that their results may be limited by the physician sample. These doctors were slightly younger overall than most practicing physicians.
Still, the findings raise ethical concerns about reporting requirements that prompt doctors to forgo needed care, the researchers said.
"We're really undertreating physicians at the same time we're trying to break the stigma for the general population," Gold observed.
And although survey participants didn't say so, questions about mental illnesses that don't impair doctors' ability to function on the job may violate the Americans with Disabilities Act, the study authors added.
Lisa Robin, chief advocacy officer at the Federation of State Medical Boards, said, "The issue of physician mental health is important."
And, she added, "because it has potential impacts on patient safety, state medical boards are taking steps to raise awareness and seek ways to ensure the licensure system is responsive to it."
As an example, Robin cited the federation's recently launched Workgroup on Physician Wellness and Burnout. A key goal is to reduce stigma associated with seeking help for burnout, which may include depression and anxiety.
The study was published online recently in General Hospital Psychiatry.
SOURCES: Katherine Gold, M.D., assistant professor, family medicine and obstetrics & gynecology, University of Michigan, Ann Arbor; Lisa Robin, chief advocacy officer, Federation of State Medical Boards, Washington, D.C.; Christine Moutier, M.D., chief medical officer, American Foundation for Suicide Prevention, Washington, D.C.; September 2016, General Hospital Psychiatry, online
HealthDay
Copyright (c) 2016 HealthDay. All rights reserved.
News stories are provided by HealthDay and do not reflect the views of MedlinePlus, the National Library of Medicine, the National Institutes of Health, the U.S. Department of Health and Human Services, or federal policy.