Individual photons of light now can be detected far more efficiently using a device patented by a team including the National Institute of Standards and Technology (NIST), whose scientists have overcome longstanding limitations with one of the most commonly used type of single-photon detectors. Their invention could allow higher rates of transmission of encrypted electronic information and improved detection of greenhouse gases in the atmosphere.
Read more ... 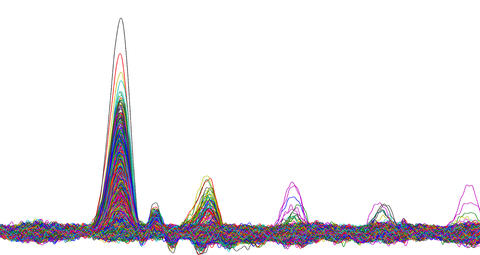 In a single-photon detector, individual photons from a light source produce detectable electronic signals (large multicolored pulse at left), as well as pulses of electronic noise (subsequent, smaller signals) that are correlated with the original signal. NIST’s newly patented detection system reduces this noise and increases the detector’s efficiency, improving the ability to detect single photons. The image above shows 4000 output signals from the detection system, some of which show the signal produced by single-photon detection.
Credit:

Individual photons of light now can be detected far more efficiently using a device patented(link is external) by a team including the National Institute of Standards and Technology (NIST), whose scientists have overcome longstanding limitations with one of the most commonly used type of single-photon detectors. Their invention could allow higher rates of transmission of encrypted electronic information and improved detection of greenhouse gases in the atmosphere.
Light is widely used for communications, carrying phone conversations and video signals through fiber-optic cables around the world in pulses composed of many photons. Single photons are the weakest signal that can be transmitted, and they too have a wide range of applications, includingobserving how single molecules or atoms behave(link is external), implementing an encryption technique called quantum key distribution, and creating high-resolution maps(link is external). However, single photons of light typically have very little energy, making them difficult to detect.
A common type of detector—based on indium-gallium-arsenide semiconductors—has been catching individual photons for years, and it is widely used in quantum cryptography research because it can detect photons at the particular wavelengths (colors of light) that travel through fiber. Unfortunately, when the detector receives a photon and outputs a signal, sometimes an echo of electronic noise is induced within the detector. Traditionally, to reduce the chances of this happening, the detector must be disabled for some time after each detection, limiting how often it can detect photons. Recent research has shown that the noisy echo can also be suppressed by activating the detector only for very short times, effectively creating a “gate” in the detector that only opens briefly to accept signals. Unfortunately, this also means that the photons have to arrive only during those short intervals. The team, which also includes scientists working at the California Institute of Technology and the University of Maryland, has patented a method to detect the photons that arrive when the gates are either open or closed. The NIST team had developed a highly sensitive way to read tiny signals from the detector, a method that is based on electronic interferometry, or the combining of waves such that they cancel each other out.
The approach allows readout of tiny signals even when the voltage pulses that open the gate are large, and the team found that these large pulses allow the detector to be operated in a new way. The pulses turn on the detector during the gate as usual. But in between gate openings the pulses turn the detector off so well that signals produced by absorbing a photon can linger for a while in the device. Then the next time the gate opens, these lingering signals can be amplified and read out.
The new detector can count individual photons at a very high maximum rate—several hundred million per second—and at higher than normal efficiency, while maintaining low noise. Its efficiency is at least 50 percent for photons in the near infrared, the standard wavelength range used in telecommunications. Commercial detectors operate with only 20 to 30 percent efficiency.
The added ability to detect photons that arrive when the gate is closed increases the detector’s efficiency, an improvement that would be particularly beneficial in applications in which photons could arrive at any moment, such as atmospheric scanning and topographic mapping.
“Single-photon detectors are useful for sensing the presence of some greenhouse gases in the atmosphere by sending a laser pulse into the air and seeing when photons come back,” said NIST physicist Josh Bienfang. “Fast-gated detectors are great for this because they can count efficiently and at high rates, but they are only sensitive during the gates because, of course, the returned photons can arrive at any time. Our new method can address this shortcoming.”
The U.S. Patent and Trademark Office issued a patent for “Photon detector and process for detecting a single photon” on July 26, 2016, as U.S. Patent No. 9,401,448(link is external), based upon Patent Application No. 14/547,189.
Publicado por salud equitativa en 7:20