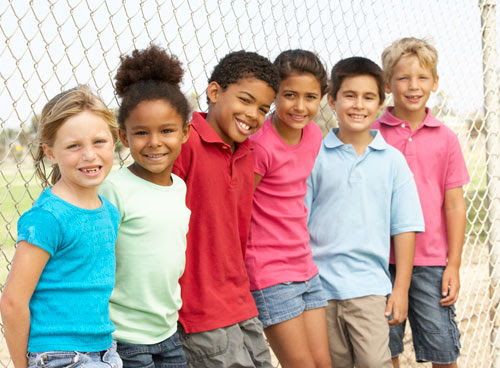 The Journal of Attention Disorders has published a new study, Attention-Deficit/Hyperactivity Disorder and Psychiatric Comorbidity: Functional Outcomes in a School-Based Sample of Children. This study looked at the number of children with attention-deficit/hyperactivity disorder (ADHD) who also have another mental disorder, and it also reported the impact that these disorders had on affected children.
Researchers from the CDC, the University of Florida-Jacksonville, and the University of Oklahoma Health Sciences Center found thatmore than half of children with ADHD also had another mental disorder, and these children were more likely to have other problems, such as struggling with friendships and getting into trouble in school or with the police.
This study can help physicians understand the needs of children with ADHD and inform the care plans developed for these children.

Using data from the Project to Learn about ADHD in Youth (PLAY), the researchers found clear patterns of co-occurring conditions: 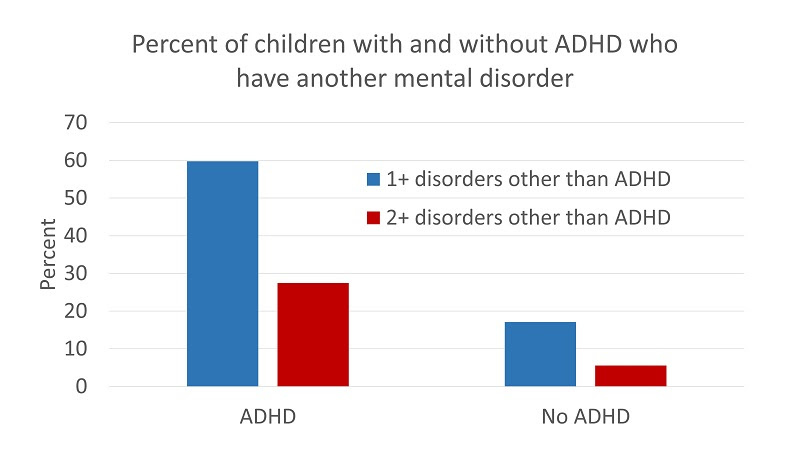 The researchers also found that children with ADHD, CD, or ODD often had more difficulties in school, problems with making and keeping friends, and getting in trouble with the police: (see chart below) 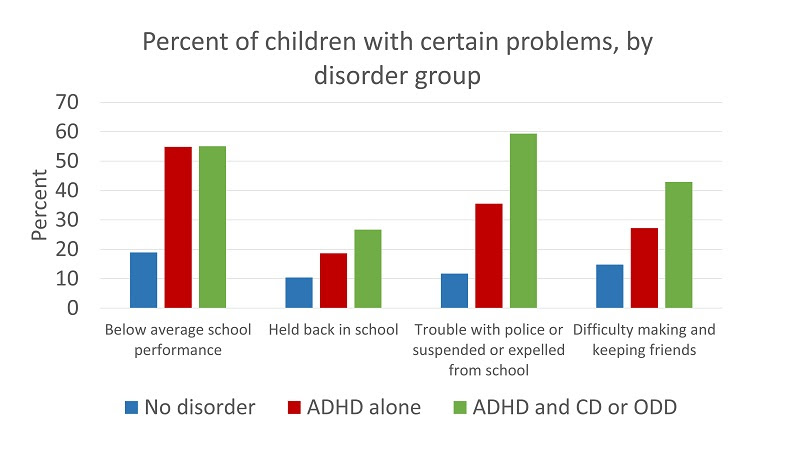 What This Study Means

Physicians can use this information to understand the needs of children with ADHD and inform the care plans developed for these children.

PLAY is a population-based project that screens schoolchildren for mental and behavioral problems and then invites some of these children in for a diagnostic evaluation. The goal of this project is to learn more about children with ADHD, the, causes, co-occurring conditions, factors that increase the risk for having ADHD, and treatment of ADHD among school-aged children. Two PLAY study sites followed children from elementary school (age 5-13 years) through adolescence (up to age 19) to investigate the short- and long-term outcomes of children with ADHD. These studies provide information on ADHD symptoms and diagnosis, and track children’s development over time. Using a community-based approach (for example, screening and recruiting children and their parents from schools) makes it possible to find children who are likely to have ADHD, but have not yet been diagnosed with the condition. The approach also helps us learn more about the development of children with ADHD over time.

CDC works to improve our understanding of ADHD and co-occurring conditions. The information learned will help us understand the factors that increase the risk for ADHD, the causes, and the best treatments, and assist us in developing resources to help children living with ADHD and their families.
Tracking: CDC monitors the number of children who have been diagnosed with ADHD through the use of national survey data.
Research: CDC conducts community-based studies to better understand the impact of ADHD and other mental and behavioral health conditions on children living with these conditions and their families.
Health Promotion: CDC supports the National Resource Center on ADHD, a program of Children and Adults with Attention-Deficit/Hyperactivity Disorder (CHADD). Their web site (http://www.help4adhd.org/) has information based on the best and most current medical evidence about the care for people with ADHD and their families. The National Resource Center operates a call center with trained staff to answer questions about ADHD. Their phone number is 1-800-233-4050.