Evidence is increasing that Zika virus can cause extensive damage to the central nervous system, affecting both fetuses and adults. We sought to identify traces of possible clinical manifestations of nervous system diseases among the registers of hospital admissions recorded in the Brazilian Unified Health System. Time series of several diagnoses from the International Classification of Diseases, 10th Revision, were analyzed by using control diagrams, during January 2008–February 2016. Beginning in mid-2014, we observed an unprecedented and significant rise in the hospitalization rate for congenital malformations of the nervous system, Guillain-Barré syndrome, encephalitis, myelitis, and encephalomyelitis. These conditions are compatible with viral infection and inflammation-associated manifestations and may have been due to the entrance of Zika virus into Brazil. These findings show the necessity of adequately diagnosing and treating suspected cases of Zika virus infection and also that health surveillance systems can be improved by using routine data.
The recent spread of Zika virus across the globe has worried citizens and public health authorities. In late February 2016, the World Health Organization (WHO) declared an international state of emergency because of the advance of microcephaly associated with the Zika virus (1). Previously considered a minor infection with mild symptoms and a low mortality rate, infection with Zika virus was seen as less severe than that caused by other arboviruses transmitted by mosquitoes of the genus Aedes, such as dengue, yellow fever, and chikungunya viruses.
However, recent studies have shown that the infection has a high potential for causing damage to the central nervous system (CNS), leading to certain congenital malformations (2) and neuropathies, such as Guillain-Barré syndrome (GBS) (3–6). The neurotropic nature of the virus and its ability to cross the blood-brain and placental barriers (7) were demonstrated in laboratory experiments, and damage to developing brains has been shown by imaging of fetuses and newborns (8). Other neuropathies may be associated with the Zika virus and could have passed unnoticed through health information systems.

Figure 1. Approximate distribution of areas of local spread of Zika virus in Brazil, 2014 and 2015. Source: adapted from (13). State abbreviations: AC, Acre; AL, Alagoas; AP, Amapá; AM, Amazonas;...
Some studies suggest that sporting events in 2013 and 2014 may have led to the introduction of Zika virus into Brazil (9). Further spread to other regions might have occurred by 2014. The first warnings of the epidemic in Brazil came on April 20, 2015 (10), with a report about the large number of cases of rash of unknown origin, which began at the end of December 2014 in various regions of the state of Pernambuco, followed by an alert issued by the state of Rio Grande do Norte (11). In May 2015, the spread of Zika virus among the local populations was laboratory confirmed, first in the Pernambuco and Bahia, then in other states of the center-west and southeast regions (12). The distribution of Zika virus in Brazil during 2014 and 2015 is summarized in Figure 1, according to case reports and epidemiologic data produced by the Federal Ministry of Health and state secretaries of health (13).
One strategy for acquiring morbidity data is to analyze hospital admission records. The Hospital Information System (SIH, in Portuguese) is primarily financial and administrative in nature, but it can be used as a data source for epidemiologic studies and surveillance because of advantageous characteristics, such as national coverage, relative consistency and standardization in terms of data generation, and rapid production and dissemination of data. These features facilitate its incorporation into epidemiologic alert systems, especially those for infectious diseases.
An analysis of hospital admissions data can provide a baseline that enables identification of trends in the number of admissions for neuropathies that affect the nervous system, as well as inflection points that depart abruptly from these trends. Long-term analyses of diseases potentially associated with Zika virus continue to be nonexistent in Brazil and have become urgently needed to bring into focus the scope of the problem, as well as delineate monitoring strategies for the epidemic in Brazil and other affected countries.
The main objective of this study was to analyze temporal patterns in hospitalizations in separate Brazilian regions during January 2008–February 2016, for neuropathies, which could have been associated with Zika virus infection in separate Brazilian regions. This period includes the time before the epidemic and the onset of the Zika epidemic in Brazil.

This is a descriptive study of a time series from a population dataset. We sought to evaluate historical trends in neurologic conditions potentially related to infection with Zika virus, based on the principal diagnosis assigned at discharge as the main reason for hospitalization. Data were made available by the Informatics Department of the National Health System through the Hospital Information System during January 1, 2008–February 29, 2016, according to each patient’s state of residence.
We selected the health problems analyzed in this study on the basis of monitoring protocols put in place to track reports of microcephaly related to infection with Zika virus (14) and track neurologic conditions for which the patient had a history of previous viral infection (15). We considered all hospital admissions for the following: 1) congenital malformations of the nervous system (International Classification of Diseases, 10th Revision [ICD-10] Q00-Q07) in children <1 year of age, 2) GBS (ICD-10 G610; 3) other potential and unspecific clinical manifestations such as encephalitis, myelitis, and encephalomyelitis (ICD-10 G040-G049); 4) abortion and related problems (ICD-10 O03-O07); in particular, 5) spontaneous abortion (ICD-10 O03). In Brazil, abortion is permitted in cases of risk to the mother and fetus, as well as in cases of sexual violence. Other cases of induced abortion are attended to in hospitals when the woman initiates an abortion, when an incomplete abortion leads to complications, or in cases of hemorrhage or infection (16).
Time series were assembled by using aggregate data tabulated by month and region. Because the Northeast region was, until the end of 2015, the center of the Zika outbreak and of the surge in microcephaly cases, we analyzed this region and compared the results with those from the other Brazilian regions in aggregate. We calculated crude hospital admission rates for each month of the study using population estimates provided by the Brazilian Geography and Statistics Institute (Brazil). With respect to congenital malformations of the nervous system in children <1 year of age, we calculated the rate of hospitalizations using the number of live births per month as the denominator. In the case of abortion, we obtained the rate of hospitalizations using the number of live births per month as the denominator with a lag of 7 months, which reduced the effect of seasonality so common in data for births as well as for abortions.
The total number of hospitalizations can vary greatly by state due to variations in staffing at the local level and disparities in access to services for utilizers of the public health system (17). To control for the effect of the capacity of health services to provide hospital beds, we used the same techniques and parameters for the analysis of the general causes of hospitalizations, which include admissions for malformations among newborns (ICD-10, Chapter XVII: Congenital Malformations, Deformities and Chromosomal Anomalies) and all admissions for nervous system diseases (ICD-10, Chapter VI).
We compared the monthly hospitalization rates of the Northeast region with rates in non-Northeast Brazilian regions, added to a 95% CIs (1.96-fold SDs from the mean) as upper limits for detection of peaks in the time series. These data were plotted as control charts, which allowed for evaluation of long-term trends, seasonality, and anomalies in the series by visual inspection. We tested the difference between observed and expected number of hospitalization—assuming the historical baseline as a control parameter—by calculating the rate ratio (IRR) and CI using Poisson regression. 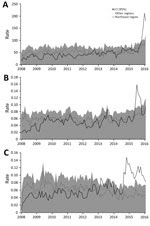 We are thankful for the support of the Brazilian Ministry of Health, namely, the Health Situation Analysis Department. We also are grateful for the inspiring ideas from Paulo Sabroza, as well as the advice from Laura Machado and the anonymous reviewers of the Emerging Infectious Diseases journal.
The authors received partial support from the Conselho Nacional de Desenvolvimento Científico e Tecnológico, project 404160/2013-1.