We evaluated incidence, case-fatality rate, and trends of community-associated (CA) and healthcare-associated (HA) Clostridium difficile infections (CDIs) in Finland during 2008–2013. CDIs were identified in the National Infectious Disease Register, deaths in the National Population Information System, hospitalizations to classify infections as CA or HA in the National Hospital Discharge Register, and genotypes in a reference laboratory. A total of 32,991 CDIs were identified: 10,643 (32.3%) were CA (32.9 cases/100,000 population) and 22,348 (67.7%) HA (69.1/100,000). Overall annual incidence decreased from 118.7/100,000 in 2008 to 92.1/100,000 in 2013, which was caused by reduction in HA-CDI rates (average annual decrease 8.1%; p<0.001). The 30-day case-fatality rate was lower for CA-CDIs than for HA-CDIs (3.2% vs. 13.3%; p<0.001). PCR ribotypes 027 and 001 were more common in HA-CDIs than in CA-CDIs. Although the HA-CDI incidence rate decreased, which was probably caused by increased awareness and improved infection control, the CA-CDI rate increased.
Clostridium difficile is a common cause of antimicrobial-associated diarrhea in Finland (1) and elsewhere in Europe and Northern America (2,3). Dissemination of C. difficile genotypes with different virulence properties contributes to C. difficile infection (CDI) epidemiology (4–6). PCR ribotype 027 has been associated with more severe CDI outcomes (7–9), but not all studies have confirmed this finding (10). In Finland, hospitalizations associated with CDIs doubled during 1996–2004 (11). CDI laboratory-based surveillance was initiated in Finland in 2008, simultaneously with strengthening of infection control according to the European recommendations in several regions (8,12). During 2008−2010, a 24% reduction was observed in overall CDI incidence in Finland (13).
CDI is typically a healthcare-associated (HA) disease, but there are indications that a notable proportion of cases are not associated with recent healthcare exposure (14–16). Some studies have shown that the incidence and severity of community-associated (CA) CDIs have been increasing (17). In Finland, the proportion of CA-CDIs among hospitalized patients in 16 acute-care hospitals was 16% during 2008–2010 (13).
The purpose of this study was to compare CA-CDI with HA-CDI in terms of population-based incidence, case-fatality rates, and trends in Finland during 2008−2013. We obtained data from national registers and genotyping results from a reference laboratory.

In Finland (population 5.5 million), the national healthcare system is organized into 21 geographically and administratively defined healthcare districts, which have populations ranging from 28,700 to 1.6 million. Sixteen healthcare districts have primary-care and secondary-care hospitals, and 5 provide tertiary-care services.
Since 2008, CDI reporting has been mandatory and all microbiology laboratories in Finland report C. difficile findings (positive cultures, toxin production, presence of toxin genes) for stool samples electronically to the National Infectious Disease Register (NIDR) (8). Each notification includes specimen date, each person’s unique national identity code, date of birth, sex, and place of residence. In 2008, all laboratories used methods for detecting both TcdA andTcdB genes and 87% (20/23) used culture of C. difficile; 3 laboratories had started to use nucleic acid amplification tests (NAATs) for primary diagnostics (18). During 2011–2013, five laboratories were using NAATs as primary diagnostics tests.
The National Hospital Discharge Register is a civil register comprising comprehensive healthcare records provided by all hospitals and primary-care wards in Finland, including outpatient surgery (i.e., day surgery). Each record includes the patient’s national identity code, admission and discharge dates, healthcare provider code, type of service, specialty, and place (home or institution) from which the patient came to the hospital.
Since 2008, clinical microbiology laboratories have been requested to send C. difficile isolates from severe cases (CDI-related intensive care, colectomy, or death) (4,12,19) and persistent outbreaks to the national reference laboratory for genotyping. All isolates received by the reference laboratory during 2008–2013 were PCR ribotyped. PCR ribotyping was performed according to the protocol of the Anaerobe Reference Laboratory (Cardiff, UK) (20) and by using the Cardiff−European Centre for Disease Prevention and Control (Solna, Sweden) culture collection as reference strains. After gel electrophoresis, band patterns were analyzed by using BioNumerics 3.0–6.6 software (Applied Maths NV, Sint-Martens-Latem, Belgium).
For this study, all notifications of toxin-positive C. difficile accompanied by an appropriate national identity code during 2008−2013 were extracted from the NIDR. Using a 3-month time interval, we merged multiple notifications for the same person as a single episode. A total of 32 reports without an appropriate national identity code and 312 reports for persons <1 year of age were excluded. Data from the National Population Information System for 2008–2013 were used as denominators to calculate annual incidence rates and age- and sex-specific average annualized incidence rates, including incidence rate ratios with 95% CIs. Dates of deaths were obtained from the National Population Information System by using the national identity code. Case-fatality rates were calculated by dividing all deaths from any cause <30 days after a positive diagnostic result for CDI was obtained by the total number of CDIs.
We considered as significant P values <0.05 without Bonferroni corrections, as per Fisher exact test and χ2 test for comparing proportions of PCR ribotypes in CA-CDIs and HA-CDIs. Poisson regression was used to assess whether secular trends in the incidence rates were significant.
On the basis of specimen date for C. difficile and national identity code, data for hospitalizations before the C. difficile−positive specimen date were obtained from the hospital discharge register. An episode of CDI was classified as HA if the positive specimen was obtained >2 days after admission to a hospital or <4 weeks after discharge and as CA otherwise (obtained outside a hospital, >4 weeks after hospital discharge, or <2 days after admission). Episodes of CDI among residents in long-term care facilities (LTCFs) could be classified as HA only if residents were transferred to a hospital and the positive specimen was obtained <2 days after admission. PCR ribotyping data were linked to NIDR data by using the patient’s date of birth and healthcare district if the date of the specimen was <3 months of the date used for statistics reported to NIDR.
Permission to analyze and link data from the NIDR and the National Hospital Discharge Register was granted by the Ethics Research Committee of the National Institute for Health and Welfare. Because data were already anonymous, informed consent of patients was waived. 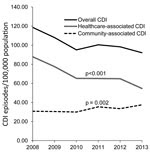 This study was supported by the National Institute for Health and Welfare (Helsinki, Finland).

1Preliminary results from this study were presented as a poster at the 3rd International Conference on Prevention and Infection Control; June 16−19, 2015; Geneva, Switzerland.
Publicado por salud equitativa en 5:26