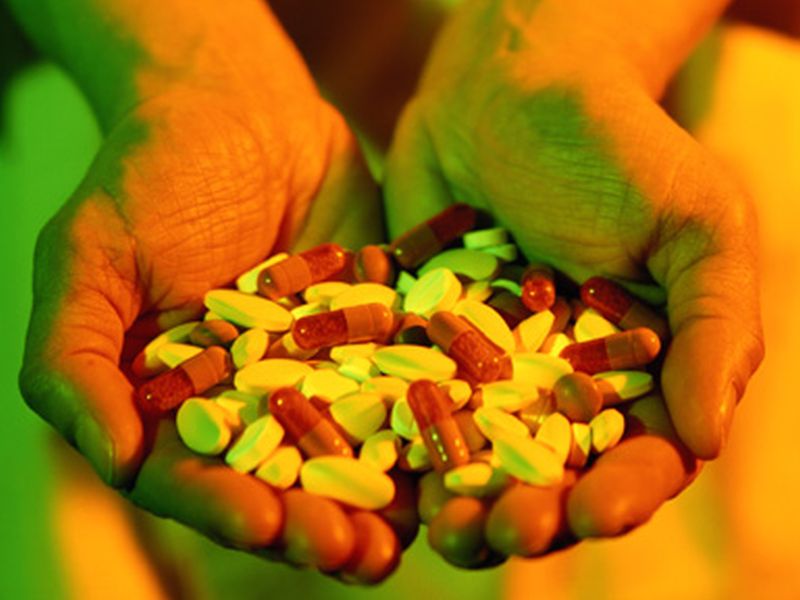 MONDAY, June 13, 2016 (HealthDay News) -- More than half the patients prescribed opioid painkillers in a recent U.S. study received more than they needed. And many shared the drugs or failed to store them securely, a new survey indicates.
The study of more than 1,000 adults prescribed painkillers like OxyContin or Vicodin shows how some Americans gain illicit access to addictive pain medications. These patterns are contributing to the nation's epidemic of prescription painkiller abuse and overdose deaths, the researchers said.
More than one in five patients admitted "they have shared an opioid medication with another person, primarily to help that other person manage pain," said study lead author Alene Kennedy-Hendricks. She is an assistant scientist in the department of health policy and management at the Johns Hopkins Bloomberg School of Public Health, in Baltimore.
Moreover, more than 60 percent of those with leftover opioids said they hung on to their drugs for "future use."
And nearly half who had recently been prescribed opioids said they didn't remember being told about safe opioid storage to keep them out of someone else's hands.
The U.S. Centers for Disease Control and Prevention has warned doctors about the dangers of overprescribing painkillers because of the risk of addiction. Reliance on painkillers also raises the odds for heroin use, a cheaper drug with similar opioid effects, the agency says. According to the CDC, deaths from prescription opioids more than tripled in the United States between 1999 and 2014.
For the study, researchers in 2015 surveyed 1,055 adults who had been prescribed opioids in the previous year. Nearly 47 percent were taking opioids at the time of the survey. All were asked about their own opioid use, their opioid storage habits, and whether they gave their medication to others.
Nearly six in 10 said they either had excess pain medication or expected to have leftovers, the researchers found.
Of those who recalled receiving storage information, only one-third said those instructions came directly from their doctor or nurse. Drug packaging or a pharmacist were the source of this advice in roughly 45 percent of cases.
In turn, fewer than one in 10 patients said they kept their opioids under lock and key, while only about 20 percent said they even stored their drugs in a "latched" location.
Not many knew how to safely dispose of excess medication, either.
"We need to make it easier and more convenient for people to dispose of their leftover opioid medication," said Kennedy-Hendricks. "There have been efforts in recent years to expand drop-off sites and approved collectors, but perhaps it has not been enough."
Clearly, health care professionals need to develop more effective ways of providing information about safe storage and disposal of these risky painkillers, she added.
Of patients who shared their medication, about 8 percent said they gave them to a friend and 14 percent said they gave them to a relative. Nearly three-quarters said they gave their spare meds to someone they knew who also struggled with pain, the study found.
The findings appear in a letter published in the June 13 online issue of JAMA Internal Medicine.
Dr. Anupam Jena, an associate professor of health care policy and medicine at Harvard Medical School, said opioid abuse is fueled in many different ways -- legitimate or otherwise.
"There is," he said, "a wealth of evidence that opioids are obtained from physicians in the outpatient setting, sometimes multiple physicians, from friends and family, family members, from the internet, and from illicit sources."
Often, a long-term attachment to opioids begins with short-term hospitalization, Jena and his colleagues report in another new study. It, too, is published in the current issue of JAMA Internal Medicine.
Their study, which focused on more than 600,000 Medicare recipients, found that on average, 15 percent of hospital patients get a new opioid prescription at discharge. Of those patients, almost 43 percent were found to still be taking opioids more than three months later.
"Our findings," said Jena, "corroborate prior work that suggests that short-term exposure to opioids can lead to long-term use and, at worse, dependence."
SOURCES: Alene Kennedy-Hendricks, Ph.D., assistant scientist, department of health policy and management, Johns Hopkins Bloomberg School of Public Health, Baltimore; Anupam B. Jena, M.D., Ph.D., associate professor, health care policy and medicine, Harvard Medical School, and physician, Massachusetts General Hospital, Boston; June 13, 2016, online, JAMA Internal Medicine
HealthDay
Copyright (c) 2016 HealthDay. All rights reserved.
News stories are provided by HealthDay and do not reflect the views of MedlinePlus, the National Library of Medicine, the National Institutes of Health, the U.S. Department of Health and Human Services, or federal policy.