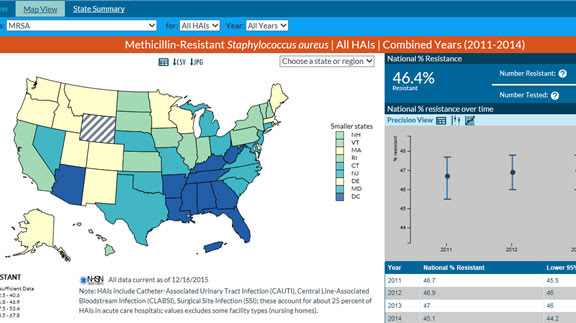 Healthcare-associated infections (HAIs)–infections patients can get while receiving medical treatment in a healthcare facility–are a major, yet often preventable, threat to patient safety. Together with health care and public health partners, CDC is working to bring increased attention to HAIs and prevention.

HAIs at a Glance

Although significant progress has made in preventing some infection types, there is much more work to be done. On any given day, about one in 25 hospital patients has at least one healthcare-associated infection.
CDC’s annual National and State Healthcare-Associated Infections Progress Report (HAI Progress Report) describes national and state progress in preventing HAIs. Among national acute care hospitals, the most recent report  (2014 data, published 2016) found:
The report also includes a national snapshot of HAIs in long-term acute care hospitals (LTACHs) and inpatient rehabilitation facilities (IRFs).
In 2014, results of a project known as the HAI Prevalence Survey were published. The Survey described the burden of HAIs in U.S. hospitals, and reported that, in 2011, there were an estimated 722,000 HAIs in U.S. acute care hospitals (see chart below). Additionally, about 75,000 patients with HAIs died during their hospitalizations. More than half of all HAIs occurred outside of the intensive care unit.


Steps can be taken to control and prevent HAIs in a variety of settings. Research shows that when healthcare facilities, care teams, and individual doctors and nurses, are aware of infection problems and take specific steps to prevent them, rates of some targeted HAIs (e.g., CLABSI) can decrease by more than70 percent. Preventing HAIs is possible, but it will take a conscious effort of everyone–clinicians, healthcare facilities and systems, public health, quality improvement groups, and the federal government–working together toward improving care, protecting patients, and saving lives.