Data submitted to the Centers for Disease Control and Prevention (CDC) by public health personnel from each FoodNet site indicate whether a case of foodborne illness is an outbreak or nonoutbreak (sporadic) case. We aimed to determine whether differences exist in terms of 6 selected characteristics of outbreak cases of laboratory-confirmed Campylobacter, E. coli O157, Listeria, and Salmonella infection reported in FoodNet (3) during 2004–2011. The 6 characteristics examined were as follows: 1) the FoodNet site reporting the case; 2) the year in which a case occurred; 3) the season in which a case occurred; 4) the age of patient (generally, the difference between submission date and reported date of birth); 5) the sex of the patient; and 6) the hospitalization status of the patient (i.e., whether the patient was hospitalized within 7 days of specimen collection).
Since 2004, the FoodNet surveillance catchment area has been stable. The FoodNet sites were Connecticut, Georgia, Maryland, Minnesota, New Mexico, Oregon, Tennessee, and selected counties in California, Colorado, and New York. To ensure sufficient data, we determined quintiles for season and age groups. Because the data distributions differed between the pathogens, these quintiles were determined for each pathogen separately. Sex and hospitalization status were binary variables.
Other variables of potential interest, such as source of specimen (e.g., stool, blood, or urine), race, ethnicity, and international travel, were not included in the analysis because there were relatively high percentages of missing observations for some pathogens and because percentages were highly variable over time and across other variables in the analysis, possibly introducing an unknown amount of surveillance bias and limiting interpretation of results. For example, the fraction of cases for which information on international travel by the patient was missing ranged from 6% for E. coli O157 to 44% forCampylobacter. Similarly, the fraction of cases for which information on race was missing ranged from 7% for E. coli O157 to 26% for Campylobacter. Our summary descriptions and final models are based on the set of FoodNet case reports for which all 6 variables are complete. Missing values for certain variables are described in the Technical Appendix[PDF - 234 KB - 2 pages].
To complete the analysis of these characteristics, we used a 2-step approach for each of the 4 pathogens examined. First, we conducted random forest and boosted tree analyses (4,5) to gauge the relative importance of the 6 characteristics in distinguishing between outbreak and sporadic cases. Random forest analysis is a data classification algorithm that seeks the best combination of factors to explain an outcome variable (i.e., outbreak or sporadic case). Boosted tree analysis pertains to the use of regression techniques (e.g., mean square errors) for measuring the fit of the trees to the data. We created random collections of classification trees and averaged those trees by a measure of how well each tree fit the data.
For each pathogen, we trained random forest models on ≈85% of the data; we used the remaining ≈15% of the data to validate the model’s classifications of outbreak and sporadic cases. We used the G2 statistic (a modified Wilk’s statistic) to identify more and less important factors (6). In a stepwise fashion, we removed the least important factors to determine if model misclassification of outbreak status improved for the training dataset or the validation dataset. We stopped the model simplification whenever removal of a factor caused misclassification to worsen. Factors that were not eliminated were carried on to the next step.
The second step of the analysis was logistic regression modeling. We used stepwise model building routines (7) to examine all main effects and interactions among the factor levels (i.e., model parameters) explaining the fraction of cases that are outbreak-associated cases (i.e.,
where p is the probability of a case being an outbreak case and X is a matrix of the data with the number of rows equal to the number of cases and the number of columns equal to the total levels of explanatory variables considered). As a model identification guide, we used forward selection procedures and minimum Bayesian information criterion scoring (BIC) (8). BIC is a preferred selection criterion because it penalizes the inclusion of additional parameters more strongly than alternative statistics (e.g., Akaike information criteria) (8,9).
We selected the logistic regression models with the lowest BIC scores as the best models. We used visual assessments of the residuals and interactions to assess the adequacy of the methods and models. 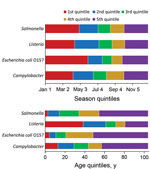 Figure 1. Quintile categorization of season and age for persons with foodborne illness included in the analysis of Foodborne Diseases Active Surveillance Network (FoodNet) data, United States, 2004–2011.
Seasonal quintiles were similar across pathogens except for E. coli O157; the first season was longer compared with the other pathogens, extending from January through the end of May (Figure 1). Age quintiles, however, differed substantially across pathogens. For example, to capture 20% of the data for Listeria, the first quintile was defined as cases in patients who were 0–38 years of age. In contrast, the first quintile for Salmonella only extended to patients 3 years of age. For Listeria, the relatively narrow quintile range for persons 60–80 years of age reflects the larger number of older persons among these cases. For the binary variables (sex and hospitalization), the frequency of male patients was ≈50% among all FoodNet cases for the 4 pathogens, and the percentages hospitalized for Campylobacter, E. coli O157, Listeria, and Salmonella infections were 16%, 44%, 93%, and 29%, respectively.
A descriptive treatment of the data shows that the frequency of outbreak cases among all FoodNet cases varied more for FoodNet site, year, patient age, and season than for sex and hospitalization status for each pathogen (Table 2). Compared with the other pathogens, Listeria exhibited substantial frequency ranges for some characteristics. For example, the percentage of Listeria cases that were outbreak versus sporadic cases per year varied from 0% versus 100% during 2007–2009 to 30.6% versus 69.4% in 2011. Variability was difficult to determine for Campylobacter because of the low frequency of outbreak-associated cases.
In general, FoodNet sites in Georgia and California had smaller percentages of outbreak cases, whereas Oregon and Colorado had larger percentages. California had small outbreak case percentages for Campylobacter (0.1%) and E. coli O157 (1.5%), whereas Georgia had the smallest percentage among all sites for Listeria (0.0%) and Salmonella (2.6%). Colorado had the largest outbreak case percentage among all sites for Campylobacter (1.0%) and E. coli O157 (38.9%), whereas Oregon and New Mexico had the largest percentages for Salmonella (20.5%) and Listeria(34.9%), respectively.
For each pathogen’s random forest analysis, the G2 statistic was smallest for the binary variables (sex and hospitalization). Furthermore, misclassification errors for the training and validation datasets were not substantively changed whether the analysis included all 6 factors or excluded sex and hospitalization status. Consequently, sex and hospitalization status were not important for classifying outbreak and sporadic cases for any of the pathogens, and these factors were excluded from the logistic modeling step.

Figure 2. Patterns of the Bayesian information criterion (BIC) statistic as a function of the number of model parameters are shown for the four pathogens included in the analysis of Foodborne Diseases Active...

Figure 3. Residual plots relative to fitted estimates of outbreak-associated case frequency for the best-fitting models used in the analysis of Foodborne Diseases Active Surveillance Network (FoodNet) data, United States, 2004–2011. A)Campylobacter;...
Plots of the BIC statistic for increasingly complex models illustrate that its value decreases to a minimum and then increases for more complicated models (Figure 2). For Campylobacter, the minimum BIC corresponds to a model containing just the FoodNet site parameters. For E. coli O157 and Listeria, the minimum BIC corresponds to a model with 16 parameters (9 for FoodNet site and 7 for year, with 1 reference value for each factor included in the intercept term). For Salmonella, the minimum BIC corresponds to a model with 152 parameters that includes all 4 factors (24 parameters plus the reference intercept), the FoodNet site by year interactions (63 parameters), the year by season interactions (28 parameters), and the FoodNet site by season interactions (36 parameters). Residual plots of the best-fitting models demonstrate reasonable fit to the data (Figure 3). These plots illustrate that the studentized residuals ([observed frequency – predicted frequency of outbreak-associated cases]/SE of predicted frequency) generally cluster within 3 SD of the mean. 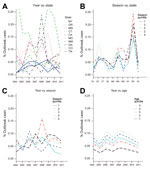 Figure 4. Interaction plots from the best-fitting Salmonellalogistic regression model used in the analysis of Foodborne Diseases Active Surveillance Network (FoodNet) data, United States, 2004–2011. A) Year versus state; B) season versus...
Interaction plots from the best-fitting Salmonella model (Figure 4) illustrate the complex relationships between some model factors. For example, interaction plots demonstrated that, for some FoodNet sites (e.g., Oregon, California, and Minnesota), the estimated proportion of outbreak-associated cases can change substantially across years. Moreover, the directions of changes are inconsistent across the sites. For example, the peaks and troughs of Oregon’s proportions across years are nearly the opposite of Minnesota’s pattern. Likewise, theSalmonella interaction plots demonstrated interactions between the seasonal quintile and both the surveillance year and the FoodNet site. In contrast, the patterns for the age quintiles are consistent across surveillance years. Nevertheless, the first age quintile (0–3 years of age) has a markedly lower proportion of outbreak-associated cases relative to the other age quintiles. This underrepresentation of outbreak-associated cases among the youngest age quintile drives the significance of the age parameter in the logistic regression model.