In Poland, African swine fever (ASF) emerged in February 2014; by August 2015, the virus had been detected in >130 wild boar and in pigs in 3 backyard holdings. We evaluated ASF spread in Poland during these 18 months. Phylogenetic analysis indicated repeated incursions of genetically distinct ASF viruses of genotype II; the number of cases positively correlated wild boar density; and disease spread was very slow. More cases were reported during summer than autumn. The 18-month prevalence of ASF in areas under various animal movement restrictions was 18.6% among wild boar found dead or killed by vehicles and only 0.2% in hunted wild boar. Repeated introductions of the virus into the country, the primary role of wild boar in virus maintenance, and the slow spread of the disease indicate a need for enhanced biosecurity at pig holdings and continuous and intensive surveillance for fast detection of ASF.
African swine fever (ASF) is an infectious and notifiable disease of domestic and wild animals of the family Suidae (1,2). First described in Kenya in 1921, ASF was territorially restricted to Africa only until 1957, when it spread from Angola to Lisbon. From then on, ASF has been repeatedly detected in many countries of Europe, Central America, and South America. In some countries (e.g., France, Belgium, the Netherlands), ASF outbreaks were rapidly contained, but in others (e.g., Portugal and Spain) ASF virus (ASFV) persisted for >30 years. Another long-time infected region in Europe is Sardinia (Italy), where ASFV has been circulating since 1978 and where the disease has been maintained as endemic (3). In 2007, the most recent epidemic started in Georgia and thereafter moved to Armenia, Azerbaijan, and the Russian Federation (4,5). In 2012 and 2013, ASF occurred in Ukraine and Belarus, respectively, and in 2014, it crossed into the European Union. According to the World Organisation for Animal Health, >550 ASF cases among wild boar and outbreaks among domestic pigs were detected through 2015 in Estonia, Latvia, Lithuania, and Poland (5).
In Poland, the first cases of ASF were detected in wild boar in February 2014 in the northeastern part of the country, very near (<1 km) the border with Belarus (6). As of August 31, 2015, a total of 76 cases in wild boar and 3 outbreaks among domestic pigs had been found in 3 counties (basic administrative regions of Poland).
Extensive surveillance revealed a unique pattern of disease spread that did not fit the commonly perceived concept of ASF epidemiology. Our study objective was to describe the spatiotemporal spread of ASF in Poland during the first 18 months after detection of the first cases.

After the first cases of ASF in Poland were confirmed, the affected area was differentiated into 3 levels of risk: area I (regions free from ASF but located near areas where ASF had been occurring in wild boar), area II (ASF detected in wild boar only), and area III (established after detection of ASF in pigs) (7,8). Despite differences with regard to animal movement restrictions, the surveillance strategy applied to areas I–III was the same: all wild boar found dead and those killed in road accidents (passive surveillance) and hunted wild boar (active surveillance) from all areas were submitted for testing. Samples collected from dead wild boar were whole blood, serum, marrow bones, kidneys, liver, spleen, lymph nodes, and lungs; samples from hunted wild boar were whole blood and serum. Homogenates (10% wt/vol) of individual tissues were prepared in phosphate-buffered saline. Clarified material was stored at −80°C or directly used for virus DNA extraction. Virus DNA was extracted directly from 200-μL aliquots of serum or tissue sample homogenates by using the commercial QIAamp DNA Mini Kit (QIAGEN, Hilden, Germany) according to the manufacturer’s recommended procedures. We used a PCR with the ASF diagnosis primers and a commercial probe (Universal ProbeLibrary no. 162; Roche Applied Science, Branford, CT, USA), which generates an amplicon of 74 bp within viral protein 72, to confirm the presence of ASFV DNA. Specific primers and probes were added to a LightCycler 480 Probes Master Kit (Roche Applied Science), and reactions were performed in a Stratagene Mx3005P real-time PCR thermocycler (Agilent Technologies, Santa Clara, CA, USA) according to the protocol described by Fernández -Pinero et al. (9).
Altogether, from February 2014 through August 2015, samples from 609 dead/road accident wild boar and 12,253 hunted wild boar from areas I–III (7,8), as well as from ≈35,000 domestic pigs, were tested by real-time PCR; detailed results and difficulties encountered during the diagnostic process are described elsewhere (10). According to terminology adopted in Poland, outbreaks were defined as the detection of DNA of ASFV in pigs (irrespective of the number of pigs in a holding), and cases were defined as the presence of viral DNA in >1 wild boar found at the same time and in the same place. Thus, the number of infected animals outnumbered the number of cases or outbreaks. However, for the purpose of prevalence calculations, we took into account individual animals. To calculate the annual prevalence of ASF in wild boar during the first year of the epidemic and to analyze potential seasonal variations, we established prevalence rates (with 95% CIs) separately for wild boar tested within the scope of active and passive surveillance in quarterly intervals: spring (March–May 2014), summer (June–August 2014), autumn (September–November 2014), and winter (December 2014–February 2015). In addition, we calculated prevalence in monthly intervals to encompass the period from the beginning of the epidemic in February 2014 through August 2015. We mapped the locations of ASF outbreaks and cases by using sampling location coordinates in ArcGIS for Desktop software (Esri Inc., Redlands, CA, USA).

We used the DNA of ASFV representing 64 cases and 3 outbreaks for phylogenetic analysis. So far we have failed to produce proper-length readable sequences for samples from case nos. 20, 24, 26–28, 32, 51, 56, 57, and 68. The primers specific to the MGF505-2R gene ASFV sequence were designed on the basis of the complete genome sequence of the BA71V strain (GenBank accession no. U18466.2) by using online Primer 3 Plus software (http://www.bioinformatics.nl/primer3plus/). The primers were also 100% complementary to the Georgia 2007/1 sequence strain. The expected product length was estimated to be 1,173 bp. The primer sequences used for amplification and sequencing of the MGF505–2R fragment were LVR13F: 5′-GCAGAGGTATGATGTCCTTA-3′ and LVR13F: 5′-TTCCTGTTGAACAAGTATCT-3′. The PCR products were separated in a 1.5% agarose gel (Invitrogen, Grand Island, NY, USA) and then purified according to the procedure for the QIAquick Gel Extraction Kit (QIAGEN). The amplicons were sequenced on a GS FLX/Titanium sequencer (Roche Applied Science) by Centrum Badań DNA Service (Poznań, Poland). Each product was sequenced in forward and backward directions and then assembled into a single contig by using Geneious R7 software (Biomatters Ltd., Auckland, New Zealand). The ClustalW alignment calculation parameters in MEGA6 (11) were as follows: gap opening penalty 15, gap extension penalty 6.66, transition weight 0.5, and delay divergent cutoff 30%. We plotted the phylogram by using the neighbor-joining algorithm in MEGA6 software and calculated the nucleotide similarity matrix providing the information about the sequence identity by using Geneious R7 software. The obtained nucleotide sequences of ASFV isolates were trimmed, assembled into contigs, and aligned by using Geneious R7 software. We also retrieved 2 sequences of ASFV representing genotype II (Georgia 2007/1 and Odintsovo/2014 Russia) from GenBank to use for comparison. The tree was rooted against ASFV strains Warmbaths South Africa and Malawi Lil 20/1, representing genotypes IV and VIII, respectively. We submitted the nucleotide sequences of ASFV successfully sequenced in Poland to GenBank under accession nos. KT366447–KT366459 and KT900042–KT900107.

To evaluate correlations between the number of ASFV-positive wild boar and wild boar density in the forestry units in which ASF detections were notified during the first year after the beginning of the epidemic, we performed a Pearson and Spearman correlation analysis (significance level 0.05). The follow-up analysis was performed 3 months after detection of ASF in new areas, which led to enlargement of the infected zone in August 2015. To assess statistical differences between seasonal prevalence of ASF, we used the Fisher exact test with a Bonferroni correction for each single comparison (significance level 0.05). 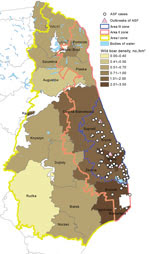 Figure 3. Locations of African swine fever (ASF) cases and outbreaks in Poland. Wild boar density data based on the National Forestry Service of Poland census.
We found a correlation between the number of ASF notifications and the number of wild boar in the affected forestry units (Spearman rank correlation coefficient R = 0.90, p<0.05) in February 2015 (during the first year after detection of the first case). As of August 2015 (after detection of ASF in new areas in June 2015 and the enlargement of the infected zone), the correlation lost statistical significance (Figure 3).

Figure 5. Nucleotide alignment of the MGF505–2R gene variable sequence fragment (residues from 1,015 to 1,149 nt) showing point mutations and differences between isolate Georgia 2007/1 isolate and African swine fever virus field...
The nucleotide and amino acid sequence identity of the MGF505-2R gene between ASFV isolates from Poland ranged from 99.47% to 100%. The largest cluster consisted of 42 sequences (41 from wild boar and 1 from pigs [outbreak 3]) exhibiting 100% homology between each other and indistinguishable from 2 references included for comparison: Georgia 2007/1 and Odintsovo 02/14 Russia (Figure 4). The second largest group containing 100% homologous sequences comprised 12 viruses (11 from wild boar and 1 from pigs [outbreak 2]) with 99.9% similarity to viruses of the previous group. The DNA fragment of the virus recovered from pigs identified as from the first outbreak differed slightly from those mentioned above, and the only identical sequence was from the virus from case no. 4. Sequences representing case nos. 15, 17, 41, 45, 55, and 72 formed a clearly separate and diverse cluster (within-group genetic diversity 99.5%–99.9%) (Figure 5).

We acknowledge Tomasz Podgórski, Iwona Markowska-Daniel, and employees of Veterinary Inspection in Poland for providing samples and sharing useful information that was used in the analysis.
The phylogenetic study was funded by the Leading National Research Centre (KNOW) Scientific Consortium “Healthy Animal–Safe Food” decision of Ministry of Science and Higher Education no. 05-1/KNOW2/2015 (K/01/1.1).