Around the World in 1,475 Salmonella Geo-serotypes

It’s easy to remember Salmonella serotypes names, isn’t it? Surely, this is because the naming system ofSalmonella serotypes is by far the most scientist friendly. Traditionally, most Salmonella serotypes have been named after geographic locations. We decided to explore the geographic locations to which Salmonellaserotypes refer and describe some unexpected twists in the naming scheme. We found that 93% (n = 1,475) of the 1,585 serotypes could be categorized as geo-serotypes; that is, the name refers to a geographic location. The 3 countries with the most geo-serotypes are Germany, the United Kingdom, and the United States. Other serotype names refer to the name of a person, animal, tribe, or food item or are a composite of symptoms and host. The Salmonella serotypes naming scheme has had a valuable effect on public health microbiology, and in the current era of fast development of whole-genome sequencing, it should remain a reference.
What do the cities of Paris, Pisa, and Toronto have in common? Yes, all 3 are famous for their towers but what else? You don’t know? Let’s see if this will help you: what do the states of Colorado, Florida, and Ohio in the United States have in common with the 3 cities above? No idea? If we tell you Salmonellaserotypes…. If you still don’t know, by the end of this essay you will, without a doubt, be able to answer these questions.
Salmonella was first isolated from a human sample in 1884 by bacteriologist Georg Gaffky and later identified as Salmonella enterica subspecies entericaserotype Typhi. The following year, the veterinary surgeon Daniel Elmer Salmon (whose name was later given to the Salmonella genus) and microbiologist Theobald Smith isolated S. enterica ser. Choleraesuis from a swine sample, while searching for the agent causing cholera in hogs (1). Since then, a plethora of Salmonella names was given to strains with new serotypes; that is, new combinations of flagellar (H) and/or somatic (O) antigens. In 1934, a first list of 44 validated Salmonella serotypes, called the Kauffmann-White scheme, was published (2).
The naming scheme of serotypes (also called serovars) evolved over time. At the beginning of the 20th century, serotype names referred to clinical syndromes either in humans (e.g., enteritidis, typhi, paratyphi) or in animals (e.g., abortus-ovis, abortus-equi, typhi-murium, cholerae-suis). The host specificity was correct for some serotypes (e.g., abortus-ovis, abortus-equi) but proved to be wrong for many others (e.g., typhi-murium, cholerae-suis) (2).
By the mid-1930s, Fritz Kauffmann was heading the World Health Organization Collaborating Centre for Reference and Research on Salmonella at the Statens Serum Institut, Copenhagen, Denmark. While there, he began to name new serotypes according to the geographic origin of the isolated strain. After Kauffmann’s retirement in 1965, Léon Le Minor became director of the World Health Organization Collaborating Centre at the Institut Pasteur, Paris, France (3), and he perpetuated the serotype naming scheme established by Kauffmann.
Kauffmann considered each serotype as a species and, consequently, in the old literature, the serotype names were italicized (e.g., typhi). DNA-DNA hybridization, which arrived in the 1980s, showed otherwise: only 2 species (S. enterica and S. bongori) were found to be in the genus Salmonella. This discovery led to a long-standing debate until, in 2005, the Judicial Commission of the International Committee for Systematics of Prokaryotes made the decision to recognize the new nomenclature (4). Consequently, the serotype names must no longer be italicized and the first letter must be capitalized (e.g., Typhi). Names are only given to subspecies enterica serotypes, which represent 99.5% of all Salmonella strains. The remaining Salmonella strains are named after their antigenic formula (2).
Currently, >2,500 Salmonella serotypes have been described and listed in the “bible” of Salmonella serovars: the White-Kauffmann-Le Minor (WKL) scheme (2). Last revised in January 2007, WKL has since been completed, with 1 supplement published in 2010 (5) and another in 2014 (6). Listed in the WKL scheme are 1,585 serotypes of S. enterica subsp. enterica.
We decided to assess the geographic locations for which subspecies enterica serotypes are named and describe some unexpected twists in the naming scheme. First, we searched for published articles and books that recorded the first isolation of specific Salmonella serotypes (7–12). A large part of this exploration relied on the extensive work of the microbiologist Eckehart Kelterborn, who cataloged the history of Salmonella serotypes first isolations in 2 books: Salmonella-species: First Isolations, Names and Occurrence (7) and Catalogue of Salmonella First Isolations 1965–1984 (8). Then, we used the open GeoNames database (13) and Google Maps (14) to find the geographic locations corresponding with the serotype names.
Of the 1,585 serotypes of S. enterica subsp. enterica that we considered, 1,475 (93%) are geo-serotypes (i.e.,the name is associated with a geographic location); 95 (6%) have names related to a nongeographic origin (e.g., person, animal); and 15 (1%) have names of unknown origin. Geo-serotypes include serotypes for which there is a clear reference in the literature of the first isolation and link to a geographic location and for which there is no clear reference in the literature but the name is most likely associated with a geographic location with the same name. For instance, a serotype that was first described in a patient returning from France and to which was given the name of a French city was considered as a possible geo-serotype (unless contradictory information was found). The geo-serotypes were named after continents, countries, regions, islands, cities, neighborhoods, streets, gardens, rivers, lakes, and hills but also after university auditoriums, laboratories, hospitals, kibbutzim, markets, and mines. 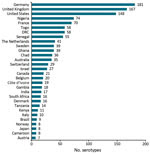