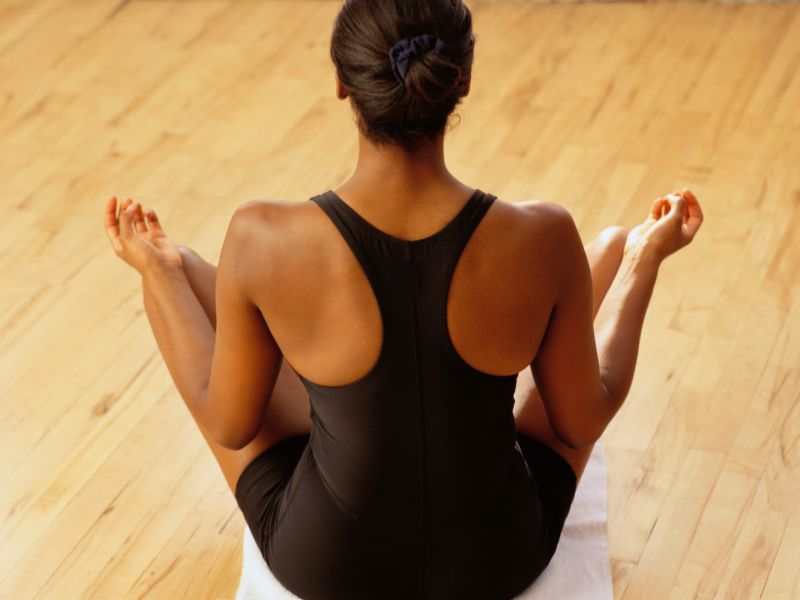 TUESDAY, March 22, 2016 (HealthDay News) -- Meditation may work better than painkillers when it comes to soothing chronic low back pain, a new clinical trial suggests.
The study found that a program called mindfulness-based stress reduction (MBSR) beat standard medical care for managing low back pain.
After one year, people who attended MBSR classes were more than 40 percent likely to show "meaningful" improvements in their pain and daily activities compared to people who sought conventional care for their aching backs.
MBSR involves group sessions in meditation and some simple yoga poses. The focus is on becoming aware of body sensations, thoughts and emotions -- without trying to change them, explained study leader Daniel Cherkin. He's a senior investigator at Group Health Research Institute, in Seattle.
It's not exactly clear why the mindfulness approach can ease back pain, according to Cherkin.
But, he stressed, no one is saying that the pain is just "in people's heads."
"Neurological research has demonstrated how the body and mind are truly intertwined," Cherkin said. The way the mind senses and responds to pain is critical, he said.
According to Cherkin, MBSR can help people acknowledge how they are feeling -- physically and otherwise -- without reacting and "getting stressed out." And that might help them manage chronic back woes.
The study was published March 22 in the Journal of the American Medical Association.
The findings were based on 342 adults with persistent low back pain for at least three months. Most of them had suffered much longer -- seven years, on average, the study authors said.
None of the study participants had a clear cause for the pain, such as a slipped spinal disc. And that's the case for most people with low back pain, Cherkin said.
"For people like these, there is no single treatment that works," he said. "That's probably because there are a lot of different factors causing people's pain."
Cherkin's team randomly assigned each patient to one of three groups: Those in the MBSR group were supposed to attend eight weekly sessions led by an instructor, and start a home practice of meditation and basic yoga poses.
A second group was assigned to eight sessions of cognitive behavioral therapy -- a form of psychological counseling where people learn to change negative thinking patterns and behaviors.
The therapy also works with the mind, but it's different from meditation, Cherkin said, because it aims to "actively change things."
People in the third study group were told they could opt for any standard treatment they liked, including pain medication and physical therapy.
Six months into the study, 60 percent of patients in the MBSR group showed a "meaningful" improvement in their daily activities -- including walking, climbing stairs and standing for long periods. That compared with 44 percent of patients who'd been free to opt for the other therapies, the researchers said.
People who received cognitive behavioral therapy also fared better: Almost 58 percent showed significant improvements at six months, the study found.
What was surprising, Cherkin said, was that the benefits of MBSR were still apparent after a year -- even though most people did not attend all eight sessions.
At one year, 69 percent of patients were reporting improvements in their daily activities, versus 59 percent of the behavioral therapy group and 49 percent of the standard care group, the study showed. Reports of bothersome pain were also improved more in the MBSR group, the study found.
"We were struck by how durable the effects were," Cherkin said.
Home practice is a key part of MBSR, said Dr. Madhav Goyal, an assistant professor of medicine at Johns Hopkins University, in Baltimore, who has studied meditation.
"It could be that most people were doing the homework, and that contributed to the benefits," said Goyal, who wrote an editorial published with the study. But, he added, that's not clear from the findings.
MBSR is a specific program that was first developed at the University of Massachusetts in the 1970s. So it's not clear that the meditation class at your local yoga center would have the same results, Goyal cautioned.
Cherkin agreed. But, he said, MBSR programs are becoming increasingly available. At roughly $400 to $500, he added, some people might think it's a worthwhile investment.
And while the study didn't test other mindfulness techniques, Cherkin said that people may still want to give them a shot, if they're interested.
"This is not for everyone with low back pain," he stressed. "Some people just don't like to meditate. Different things work for different people. But this study shows that there may be value in offering people approaches that focus on the mind."
SOURCES: Daniel Cherkin, Ph.D., senior investigator, Group Health Research Institute, Seattle; Madhav Goyal, M.D., assistant professor, medicine, Johns Hopkins University, Baltimore, and internist, NorthBay Center for Primary Care, Vacaville, Calif.; March 22, 2016, Journal of the American Medical Association
HealthDay
Copyright (c) 2016 HealthDay. All rights reserved.

More Health News on:
Back Pain
Complementary and Integrative Medicine