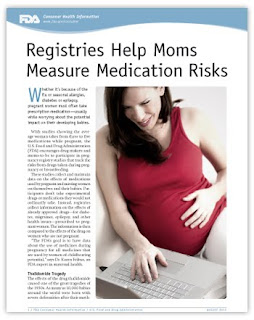 Whether it’s because of the flu or seasonal allergies, diabetes or epilepsy, pregnant women must often take prescription medication—usually while worrying about the potential impact on their developing babies.

With studies showing the average woman takes from three to five medications while pregnant, the Food and Drug Administration (FDA) encourages drug makers and moms-to-be to participate in pregnancy registry studies that track the risks from drugs taken during pregnancy or breastfeeding.

“The FDA’s goal is to have data about the use of medicines during pregnancy for all medicines that are used by women of childbearing potential,” says Karen Feibus, M.D., an FDA expert in maternal health.

Thalidomide Tragedy
The effects of the drug thalidomide caused one of the great tragedies of the 1950s. As many as 10,000 babies around the world were born with severe deformities after their mothers took the medication for morning sickness and insomnia.

The drug was marketed in Europe, Japan, Australia, and Canada, but it was taken off the market in the early 1960s when the medical community learned that it caused serious birth defects. According to the March of Dimes, about 40 percent of babies exposed to the drug died before or soon after delivery.

FDA medical officer Frances Kelsey refused to support the drug’s approval in the U.S. because she was uncertain about its safety. Because of this, most babies affected by thalidomide were born in other countries.

FDA approved the drug in 1998 for treatment of a skin disorder associated with Hansen's disease, also called leprosy and later from bone marrow cancer, but there are restrictions.

Registries now collect information on the effects of numerous medications on pregnant women and infants in an effort to identify and manage risks—and prevent tragedy.

Registry Use Expands
“Pregnancy registries are useful tools for gathering information about the effects of drugs on pregnant or nursing women and developing infants,” says Dr. Lisa Mathis, director of FDA’s pediatric and maternal health division.

“Sometimes leaving a serious medical condition untreated during pregnancy can be riskier to the mother and her developing baby than the medicine itself,” she says.

Congress gave FDA the authority to require drug makers to study the effects of newly approved medicines on pregnant and nursing women and newborn infants in the FDA Amendments Act of 2007.

Under the law, FDA experts also review applications for new drugs and decide if the manufacturer should be required to set up a pregnancy registry after approval, says Feibus.

Sometimes health professionals or the drug industry begin a registry without being required to do so—as in the case of the North American Antiepileptic Drug Pregnancy Registry, which studies the effects of drugs for the treatment of epilepsy.

Pregnant women with epilepsy are recruited to participate because they must take medicines to control seizures. The Epilepsy Foundation encourages women to enroll in the registry, which is closely monitored by researchers at Massachusetts General Hospital, the teaching hospital for Harvard University Medical School.

“By enrolling, you will help women in the future have the best chance of a healthy pregnancy and a healthy baby,” the foundation tells expectant moms in a message on its website.

In May 2008, FDA proposed a new rule that includes putting information learned from registries—as well as contact information for registries—on labeling for health professionals. The final rule will be published at the end of a multi-stepped writing and clearance process.

Registries Aid Moms, Babies
FDA says the registries protect the health of mothers and babies because

- many pregnant women have ongoing medical issues that require them to continue taking drugs during pregnancy
- new medical problems may begin or old ones may get worse
- a woman's body changes during pregnancy and the changes may affect the dosage of a medication she is taking
- a woman often takes medications while she is breastfeeding, potentially exposing her baby to the effects of medicines
- about half of the 6 million pregnancies in the United States each year are unplanned, exposing women and developing babies to drugs before they know they are pregnant

Registries typically collect the woman’s demographics and medications being taken.
Massachusetts General in Boston lists more than 30 medications being studied, and promises the process will be quick: one 20-minute phone call at the beginning and two five-minute calls after that.

In most instances, a woman can participate in a pregnancy registry by contacting the drug’s maker, her physician, or pharmacist.

Although FDA does not maintain pregnancy registries, the agency’s Office of Women’s Health has a partial list on the Internet at http://www.fda.gov/ScienceResearch/SpecialTopics/WomensHealthResearch/ucm134848.htm4. The list also includes the illness each registry represents.