By Ananya Mandal, MDNov 5 2018
Researchers have found that within one and half hour of taking an energy drink the internal diameter of the blood vessels is reduced by half on an average. As the blood vessels narrow, the vital blood supply to the organs also reduces and this can lead to several problems – heart attacks and strokes being just two of them. The caffeine and sugar present in such drinks are to blame for this phenomenon say researchers. Thus within 90 minutes of consuming an energy drink, the risk of heart attack in an individual rises find researchers from the University of Texas at Houston. 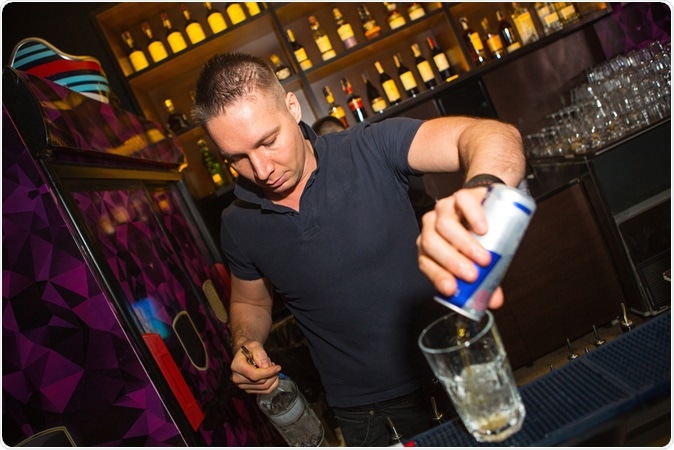 Image Credit: Alexey Lesik / Shutterstock
There have been earlier studies that have shown that these drinks can lead to nerve and stomach problems and also cause heart problems. Consuming them in high amounts has also been previously linked to metabolic disorders such as diabetes and metabolic syndrome. This is the first study that shows the mechanism by which these drinks can cause harm.
The team of researchers looked at 44 students in their 20s from McGovern Medical School at UT Health. The participants were non-smokers and were generally found to be healthy. Endothelium is the layer that lines the inner walls of the blood vessels and its damage plays an important role in several cardiovascular diseases. The effect of these drinks on healthy endothelium was tested in this study. Each of the participant underwent an examination to check for their endothelial function and then offered a 24-ounce energy drink. After 90 minutes the endothelial function was tested again. Ultrasound was used to check for arterial blood flow, inner diameter of the arteries and overall health of the blood vessel.

In 90 minutes the inner diameter of the arteries was found to be reduced by half on average – from 5.1 percent to 2.8 percent on an avaerage. The effect was noted to be due to the excess caffeine, taurine and sugar content of these drinks. Other herbal components of the drink too affected the endothelial layer say the researchers.
The primary culprit was found to be sugar. It was seen that 12 ounces of Red Bull contains 37 grams or over nine teaspoons of sugar. Such high amounts of sugar can lead to blood vessel contraction explain the researchers. Caffeine too has been found to be responsible for contraction of blood vessels by releasing adrenaline – a hormone that causes the heart to pump up and raises blood pressure. These energy drinks contain around 80mg of caffeine per 250 ml of the drink. This is equivalent to around 2.5 cans of cola.
This study is a warning say experts about the harm these drinks can cause. According to the reports from the National Center for Complementary and Integrative Health around one third of teenagers between ages 12 and 17 regularly take these energy drinks. Dr John Higgins, the study leader, said, “As energy drinks are becoming more and more popular, it is important to study the effects of these drinks on those who frequently drink them and better determine what, if any, is a safe consumption pattern.”
The results of this study will be presented at the American Heart Association's Scientific Sessions 2018 in Chicago between 10th to 12th November.
Publicado por salud equitativa en 8:04