By Sally Robertson, B.Sc.Nov 20 2018Reviewed by Kate Anderton, B.Sc.
Researchers at the University of Texas have developed a new vaccine that reduces the build-up of the toxic proteins associated with Alzheimer’s disease and proven its efficacy in an animal model. The research may pave the way for a clinical trial. 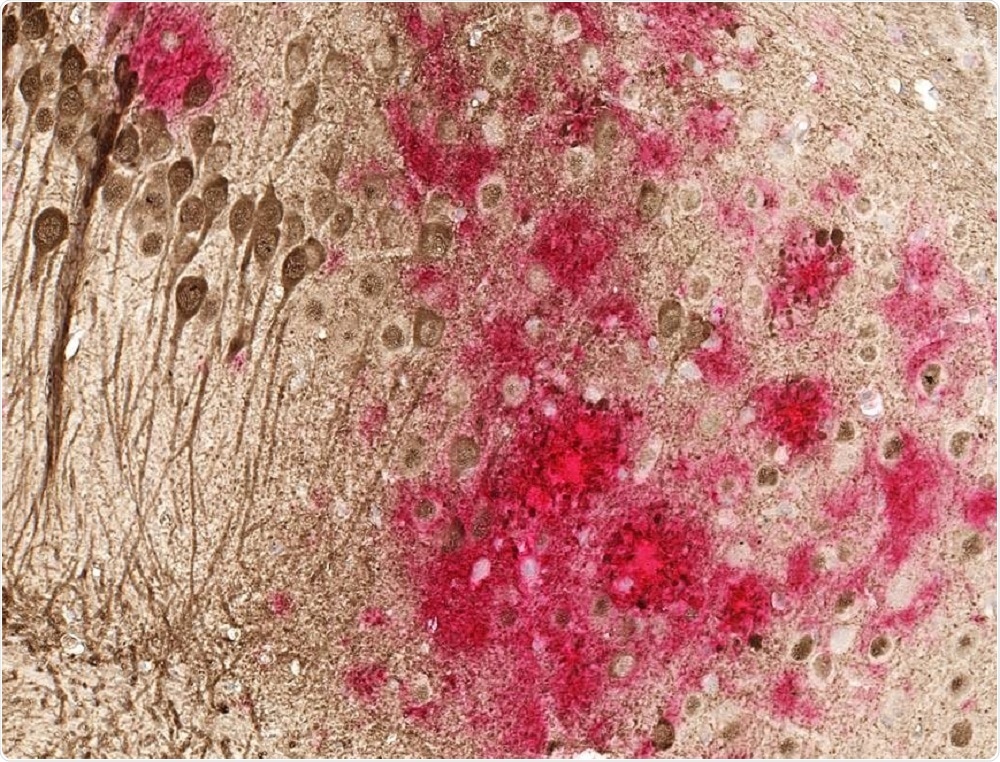 Toxic amyloid plaques (red) and tau tangles (brown) form on the brain of a mouse modeled to have Alzheimer's disease. A study shows a DNA vaccine reduces both amyloid and tau in the mouse AD model, with no adverse immune responses | UT Southwestern.
When the vaccine was administered by injection into the skin, it induced an immune response that reduced accumulation of tau and beta-amyloid, without causing the severe brain swelling that has sometimes been seen when other antibody treatments are used.
Founding Director of the Alzheimer's Disease Center at UT Southwestern, Roger Rosenberg, says the study is the culmination of a decade of research repeatedly showing the safety and effectiveness of this vaccine in targeting the suspected cause of Alzheimer’s disease in animal models.
"I believe we're getting close to testing this therapy in people," he adds.
As reported in the journal Alzheimer's Research and Therapy, a vaccine containing DNA encoding a section of beta-amyloid also reduced levels of the tau protein in a mouse model of Alzheimer’s. The immune response the vaccine promoted also appeared to be safe.
Previous research conducted in Rosenberg’s lab had demonstrated similar immune responses in monkeys and rabbits.
The vaccine has now been shortlisted as a potential antibody treatment against tau and beta-amyloid, two proteins thought to sestroy brain cells as they spread and form deadly plaques and tangles in the brains of people with Alzheimer’s.
Although previous research had demonstrated the effectiveness of antibodies in reducing amyloid build-up, Rosenberg and colleagues still needed to establish a safe mode of administration.
When another vaccine developed in the early 2000s was administered to humans, it triggered brain swelling in some patients.
Rosenberg decided to test whether injecting amyloid-coding DNA into the skin rather than the muscle would elicit a different immune response.
This resulted in the production of a three-molecule chain of beta-amyloid which the body responded to by producing antibodies that inhibit amyloid accumulation, as well as indirectly inhibiting tau.
The current study, which included four groups of 15-24 mice, showed the vaccine resulted in a 40% reduction in beta-amyloid and reduced tau by up to half, without prompting any adverse immune response.
If the accumulation of these toxic proteins is indeed the cause of Alzheimer’s, being able to achieve such reductions could be of major therapeutic value for humans.

If the onset of the disease could be delayed by even five years, that would be enormous for the patients and their families. The number of dementia cases could drop by half."
Doris Lambracht-Washington, Senior Author