Research carried out by the University has discovered the first data on an organelle that is really important in human cells in an ancient organism distantly related to humans. 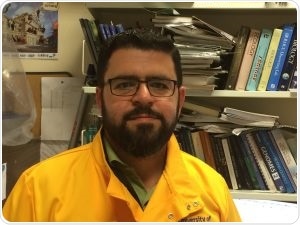 Dr Anastasios Tsaousis
The discovery will enable scientists to study the breadth and depth of cell biology. This has implications for research into autoimmune diseases like Alzheimer's and Parkinson's.

Led by Dr Anastasios Tsaousis from the School of Biosciences, in collaboration with Dr Joel Dacks from the University of Alberta (Canada), a team of researchers discovered a rare form of an organised structure called a golgi in the microbial amoeba Naegleria gruberi that was previously considered to lack such an apparatus.
In most cells, including healthy human cells, the Golgi appears as flattened membranes resembling a stack of pancakes.
In a paper published in the Journal of Cell Science, the team explains how Golgi works as part of the membrane-trafficking system. The Golgi apparatus is central to the modification and transport of proteins to their cellular destination. It functions like the postal service of the cell, composed of a production centre for cellular material, a distribution centre where material is packaged and addressed, and then postal routes that relay packages to their eventual locations within the cell.
By applying cell biological techniques to Naegleria, their research shows that the Golgi is an unstacked, tubular membranous structure. This work provides the first direct evidence for the existence of a Golgi apparatus as tubular compartments in Naegleria.
This work is important for human health as when Golgi bodies malfunction it causes diseases such as Alzheimer's, Parkinson's and other autoimmune diseases. Studying a naturally unstacked form of this organelle would allow better understanding of the relationship between Golgi dysfunction and genetic diseases.
Source:
https://www.kent.ac.uk/news/science/17652/cell-discovery-could-help-with-research-on-genetic-diseases
Publicado por salud equitativa en 8:48