By Liji Thomas, MD
Soy sauce is available in many varieties worldwide, including chemically produced soy sauce, and fermented or naturally brewed soy sauce (NBSS).
Fermented soy sauce itself comes in many forms, namely, sweet, salty, light and dark. They differ in their color, viscosity, sweetness and umami flavor.
Light soy sauce is light and thin and is the type which has the characteristic of saltiness and umami in a complex combination. It is obtained from pressing the fermented soybeans the first time. It is also called superior soy sauce.
Dark sauce is darker and less salty, produced by fermenting the pressed soybean residue (after extracting the light soy sauce) with more brine.
In some varieties, such as Chinese soy sauce, no wheat is used or very little, resulting in a darker and thicker sauce, with a stronger taste. Caramel and monosodium glutamate may be added to the latter as well.
Various additives determine the composition of the other varieties. For instance, sweet soy sauce has added palm sugar and is heated after fermentation. Salty soy sauce has added salt. 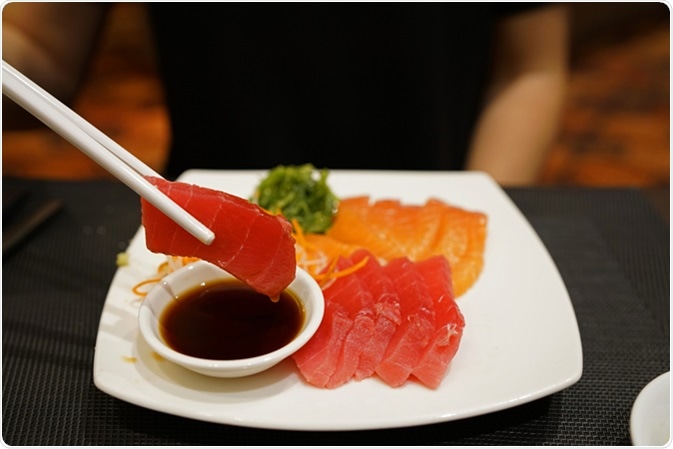 Naturally brewed or fermented soy sauce is produced over the course of months or even years, depending on the grade of the final intended product. It is manufactured using a stepwise process, in which soybeans are first cooked and then mixed with Aspergillus oryzae (a mold, also called koji) and crushed roasted wheat for fermentation over the next 72 hours. This is the koji fermentation and results in enzymatic hydrolysis of proteins to peptides and amino acids, as well as sugars from the wheat.

At the end of this time it is transferred in to a brine solution (15-20% sodium chloride) where it is brewed for 180 days at least. The yeast and lactic acid bacteria, Zygosaccharomyces rouxii and Pediococcus halophilus, respectively) now feed on the simple molecules produced by the koji fermentation, which results in the accumulation of lactic acid, acetic acid, and ethanol from the sugars.  Once fermentation has been carried out for the desired period, the mix is refined by pressing out the raw sauce from the cake, filtering it and pasteurizing it before packaging for use or for sale.
The end result is a transparent reddish-brown liquid condiment with a complex mix of salty, sweet, bitter and savory tastes, imparting a unique flavor to all kinds of cuisine, Asian or otherwise. The ingredients are thus soybeans, wheat, salt and water. This traditional Japanese process for naturally brewing soy sauce is called honjozo.

Naturally brewed soy sauce contains about 1-1.6% nitrogen, 17% -19% simple sugars and 1% -2% organic acids. Free amino acids, especially glutamic acid, make up about 45% of the nitrogen, and are responsible for the umami flavor.
Chemically produced soy sauce, on the other hand, is made by hydrolyzing the defatted soybean paste to its constituents using concentrated hydrochloric acid within a few hours to days. This is then cooled and neutralized with sodium hydroxide or sodium carbonate, pressed and filtered, and passed through activated carbon. Finally, the taste is adjusted using caramel coloring, corn syrup and salt, before packaging. This type of soy sauce is harsher in taste, is darker and cloudier than the brewed variety, and is less complex in composition as protein and peptides are almost completely broken down by the acid, and the absence of fermentation leads to the lack of complex organic compounds such as alcohols and esters which play an important role in mouth feel and taste of the brewed soy sauce, as well as imparting some health benefits. 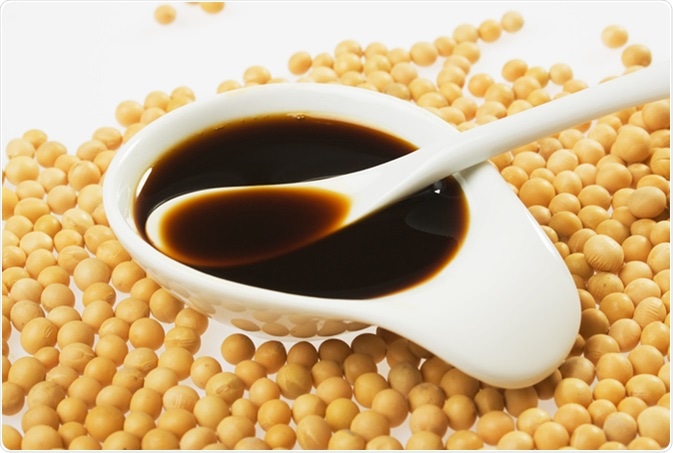 The use of NBSS in foods can replace the use of salt to varying extents, depending upon the type of food. One study showed that salad dressing could be made just as delicious and pleasant using NBSS with up to 50% reduction in salt, while for soup it was 17% and almost 30% for pork. This is an important finding as high sodium is one of the primary risk factors for cardiovascular disease. The ability to produce foods which are low in sodium but equally acceptable to the customer is an important one for the food industry. The intense umami taste in soy sauce is responsible for this phenomenon of sodium reduction with taste enhancement, and is due to the long fermentation process. Glutamic acid, aspartic acid, phenylalanine and tyrosine are mainly responsible for this taste in the presence of salt and other free amino acids. In highly processed and seasoned food such as frankfurters, research has showed that up to 35% sodium replacement is possible using soy sauce and potassium (instead of sodium) chloride.

NBSS contains nicotianamine, a component which inhibits the angiotensinogen-I converting enzyme that is key to increasing vascular tone. This may be one reason why NBSS intake does not increase the blood pressure despite its salty taste and high salt concentration.

Inflammatory bowel disease is characterized by symptoms arising from chronic gastrointestinal tract inflammation, and includes ulcerative colitis and Crohn’s disease, which may affect as many as 1 in 1000 in Western nations. Soy sauce was found to inhibit the shortening and thickening of the colon wall in similar induced gut inflammatory conditions in some animal studies. This is attributed to the decrease in proinflammatory cytokines caused by isoflavone activity in NBSS, and this is part of its anticolitic efficacy. The fermentation increases the concentrations of these compounds.
NBSS contains many bioactive compounds such as phytic acid, isoflavones, and protease inhibitors. Soy isoflavones include the glycosides daidzein, genistein, and glycitein. These are obtained during fermentation by the addition of sugars to the base isoflavones daidzin, genistin and glycitin. The concentrations of free daidzein and genistein are 0.9–23.5 mcg/g and 2.8–17.9 mcg/g respectively. Phytophenols are also increased during this process. The anticolitic effect is optimal at a dose of 4 mL/kg of FSS. It is thought that at higher doses the salt in the sauce may inhibit the full benefit of the condiment, but at this dose it may be used to substitute for salt as a food flavoring.

NBSS is found to be protective against prostate, breast, and endometrial cancers in long-term users. It reduces tumor growth in mice, a finding that has been replicated in many studies.

Soy sauce has distinctly high antioxidant potency which contributes to its healthful effects in appropriate doses. This is thought to be due to the presence of carbohydrate-containing dark pigments such as melanoidins.

Even though NBSS is produced from wheat and soybeans, the long and multi-stage fermentation ensures a complete hydrolysis of all the proteins in these foods, ensuring that no allergens remain.

NBSS contains soy polysaccharides are still present in the sauce (called shoyu polysaccharides, SPS) to about 1%, and these are powerful antiallergics. FSS also contains three shoyuflavones which inhibit the enzyme histidine decarboxylase. This in turn suppresses histamine synthesis which mediates allergy, inflammation and gastric acid secretion. Several studies showed that supplementation with SPS is effective in reducing allergic rhinitis symptoms, atopic dermatitis, and this is especially useful because it can be incorporated into daily foods.

NBSS helps increase the secretion of gastric acid, but inhibits inflammatory changes, thus promoting digestion. It also helps reduce the numbers of several bacterial strains in the stomach and intestine, including pathogenic and non-pathogenic Escherichia coli, vibrio cholerae, and salmonella.

Some research suggests that the use of NBSS reduces serum uric acid and xanthine oxidase levels, which is due to flazin, catechol and genistein in this condiment.
Reviewed by Afsaneh Khetrapal Bsc (Hons)