By Liji Thomas, MD
The anterior cruciate ligament (ACL) is one of the important ligaments that holds the knee in place, preventing the tibia from sliding forwards, anterior to the femur. It is therefore very commonly injured during high-impact sports that forcibly demand this motion, as during tackles and skid-rotate movements, which put immense strain on the ACL. 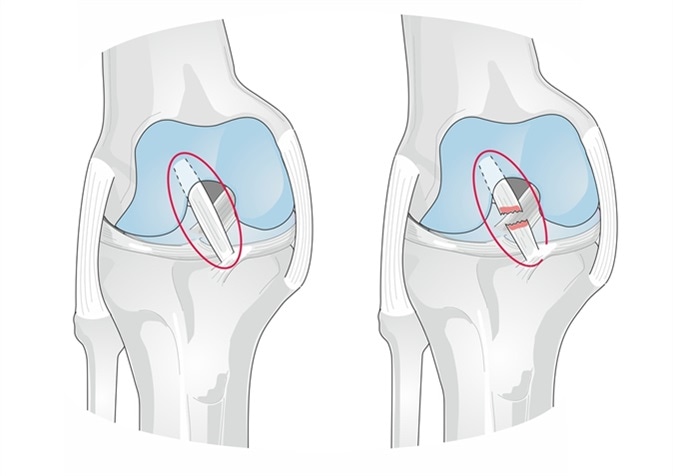 The anterior cruciate ligament (ACL) of the knee is injured usually during sports and activities. Image Credit: Soleil Nordic / Shutterstock

The knee is formed of three bones, the femur above, the tibia below, and the patella in front, which prevents hyperextension of the knee. These are connected by four strong ligaments, the medial and lateral collateral and the anterior and posterior cruciate ligaments. The thigh muscles also support and stabilize the knee.
The anterior and posterior cruciate are so called because they cross each other diagonally inside the knee joint, and they prevent the tibia from sliding out in front or behind the femur, as well as regulating knee rotation. They are named according to the location of their insertion on the tibia. Injury to the ACL is almost always associated with damage to other components of the knee.
ACL injuries are classified into sprains and tears; sprains are graded based on severity, and tears may be partial or complete.

ACL injuries may occur when the person:
Females are more often affected by ACL injury than males because of lower muscular strength and neuromuscular control, as well as differences in the anatomy of the female pelvis and lower limb and the effect of estrogen on ligament laxity.

The diagnosis of ACL is made by the history and physical examination, followed by imaging tests such as X-rays and MRI scans when required to exclude bone fractures and avulsions. Treatment is centred around the patient, and older individuals or those without significant physical exertion may be able to recover as much as necessary without surgery. It is important to realize that ACL tears do not heal on their own.
Non-surgical treatment includes:
Young active patients may need surgical reconstruction of the ligament and extensive physical therapy for them to be able to return to sports or other intensive physical tasks safely. This may also be needed if the ligament or knee is repeatedly injured. Surgery may include reconstruction of the ACL using a tissue graft to provide a supporting structure along which a new strong ligament will grow over time (about six months).
Various sources of graft tissue are used from specific tendons or sometimes from cadavers. Arthroscopic reconstruction is preferred for its lower recovery time, less post-operative pain and shorter hospitalization periods. Physical therapy is also necessary for non-surgical recovery, in addition to training in proper walking, jumping and landing techniques, as well as in making sudden turns.
Reviewed by Chloe Barnett, BSc