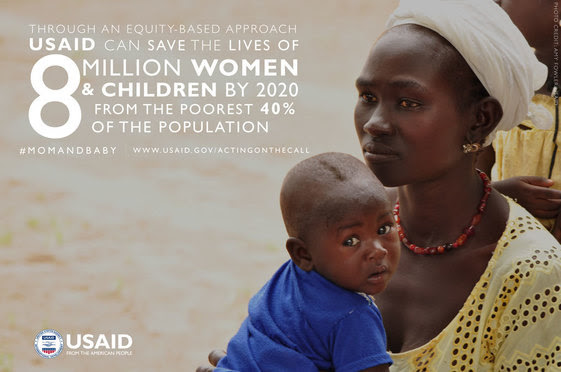 Today, the U.S. Agency for International Development (USAID) releases the 2016 Acting on the Call: Ending Preventable Child and Maternal Deaths report.
The 2016 report provides country-by-country updates on progress toward USAID’s goal of saving the lives of 15 million children and 600,000 women by 2020, focusing on 25 priority countries that, together, account for more than two-thirds of the world’s child and maternal deaths. For the first time, the 2016 Acting on the Call report also includes an in-depth look at the equitable access to health services. The report examines how, through an equity-based approach, USAID and partners can accelerate progress toward ending preventable child and maternal deaths, saving the lives of 8 million women and children from the bottom two wealth quintiles alone – the poorest 40 percent of the population – by 2020.
Highlights from the report:
Alongside the release of the 2016 report, USAID announced the Integrating Community Health Program, a new $9.2 million initiative that will leverage an additional $10 million investment from other sources, as well as support in the form of trainings, equipment, and direct support to community health workers. The Integrating Community Health Program is a collaboration between USAID and UNICEF that will support countries to achieve and sustain effective coverage of proven health interventions at scale and contribute to ending preventable child and maternal deaths.