The teenage brain on social media

Teenagers are definitely influenced by their online 'friends,' even if they barely know them. 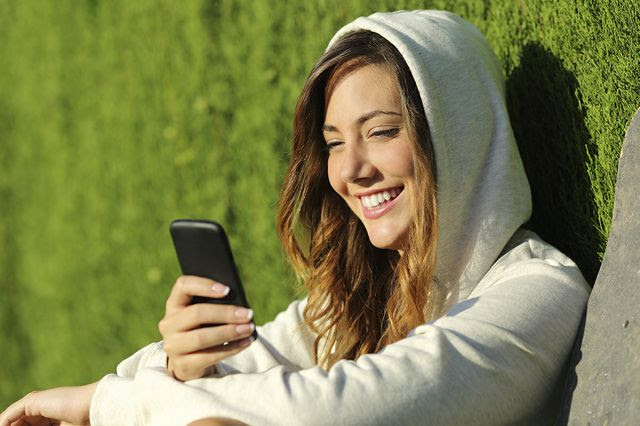 AntonioGuillem/iStock.com
The same brain circuits that are activated by eating chocolate and winning money are activated when teenagers see large numbers of "likes" on their own photos or the photos of peers in a social network, according to a first-of-its-kind UCLA study that scanned teens' brains while using social media.
The 32 teenagers, ages 13-18, were told they were participating in a small social network similar to the popular photo-sharing app, Instagram. In an experiment at UCLA's Ahmanson-Lovelace Brain Mapping Center, the researchers showed them 148 photographs on a computer screen for 12 minutes, including 40 photos that each teenager submitted, and analyzed their brain activity using functional magnetic resonance imaging, or fMRI.
Each photo also displayed the number of likes it had supposedly received from other teenage participants -- in reality, the number of likes was assigned by the researchers. (At the end of the procedure, the participants were told that the researchers decided on the number of likes a photo received.)
"When the teens saw their own photos with a large number of likes, we saw activity across a wide variety of regions in the brain," said lead author Lauren Sherman, a researcher in the brain mapping center and the UCLA branch of the Children's Digital Media Center, Los Angeles.
A region that was especially active is a part of the striatum called the nucleus accumbens, which is part of the brain's reward circuitry, she said. This reward circuitry is thought to be particularly sensitive during adolescence. When the teenagers saw their photos with a large number of likes, the researchers also observed activation in regions that are known as the social brain and regions linked to visual attention.
In deciding whether to click that they liked a photo, the teenagers were highly influenced by the number of likes the photo had.
"We showed the exact same photo with a lot of likes to half of the teens and to the other half with just a few likes," Sherman said. "When they saw a photo with more likes, they were significantly more likely to like it themselves. Teens react differently to information when they believe it has been endorsed by many or few of their peers, even if these peers are strangers."
The study is published in the journal Psychological Science.
In the teenagers' real lives, the influence of their friends is likely to be even more dramatic, said Mirella Dapretto, professor of psychiatry and biobehavioral sciences at UCLA's Semel Institute of Neuroscience and Human Behavior.
"In the study, this was a group of virtual strangers to them, and yet they were still responding to peer influence; their willingness to conform manifested itself both at the brain level and in what they chose to like," said Dapretto, a senior author of the study. "We should expect the effect would be magnified in real life, when teens are looking at likes by people who are important to them."
Should parents be worried about social media? Much like other media, social media have both positive and negative features, the researchers said.
Many teenagers and young adults befriend people online whom they don't know well, and parents are right to be concerned, Dapretto said. "That opens up the possibility of a child being more influenced by people who may engage in more risk-taking behavior than your child or your child's immediate friends," she said.
"Parents used to know their child's friends, but when they have several hundred friends, there's no way parents can know who they are," said Patricia Greenfield, director of UCLA's Children's Digital Media Center, Los Angeles and the study's other senior author.
But Sherman points out a possible advantage of social networks. "If your teen's friends are displaying positive behavior, then it's fabulous that your teen will see that behavior and be influenced by it," she said. "It's important for parents to be aware of who their teens interact with online and what these friends and acquaintances are posting and liking. In addition, teens' self-identity is influenced by the opinions of others, as earlier studies have shown. Our data certainly seem to reflect that as well."
Peer pressure to conform has long existed, but online likes are different. "In the past, teens made their own judgments about how everyone around them was responding," Sherman said. "When it comes to likes, there's no ambiguity."
The teenagers in the study viewed "neutral" photos -- which included pictures of food and of friends -- and "risky" photos -- including of cigarettes, alcohol and teenagers wearing provocative clothing.
"For all three types of photographs -- neutral, risky and even their own -- the teens were more likely to click like if more people had liked them than if fewer people liked them," said Greenfield, a UCLA distinguished professor of psychology. "The conformity effect, which was particularly large for their own pictures, shows the importance of peer-approval."
When teenagers looked at risky photos compared with neutral photos, they had less activation in areas associated with "cognitive control" and "response inhibition," including the brain's dorsal anterior cingulate cortex, bilateral prefrontal cortices and lateral parietal cortices.
These brain regions are involved in decision-making and can inhibit us from engaging in certain activities, or give us the green light to go ahead, Dapretto said.
Seeing photos that depict risky behavior seems to decrease activity in the regions that put the brakes on, perhaps weakening teens' "be careful" filter, she said.
Stuart Wolpert is a media contact at UCLA.
- See more at: http://www.mercatornet.com/connecting/view/the-teenage-brain-on-social-media/18179#sthash.6o7cdvaM.dpuf

One day it was about a handful of individuals who had sexual identity problems; the next, it was about the US federal government telling schools they had to let boys into the girls' toilet block. How did transgenderism (and it really is an ism) come up on us so fast? What is driving this issue?
That is the question we put to some scholars and today we begin publishing their answers. Professor Mark Regnerus puts it down to marketing, and specifically to "framing" of the issue as an urgent human rights one. Marketing takes money, of course, but the LGBT movement seems to have pots of that.
One thing is clear: if anyone thought the sexual revolution was something that happened in the 1960s, they are sadly mistaken. What it's ultimately about is the subject of Stella Morabito's very perceptive article. Her concluding advice is something I agree with and am newly resolved to practise more consistently: never to use the word "gender" when we really mean "sex".
There's a cute video from The New Yorker on the front page -- about social awareness in the Facebook generation.
Enjoy, and see you Monday.