We investigated the prognostic role of high MICs for antistaphylococcal agents in patients with methicillin-sensitive Staphylococcus aureus catheter-related bloodstream infection (MSSA CRBSI). We prospectively reviewed 83 episodes from 5 centers in Spain during April 2011–June 2014 that had optimized clinical management and analyzed the relationship between E-test MICs for vancomycin, daptomycin, oxacillin, and linezolid and development of complicated bacteremia by using multivariate analysis. Complicated MSSA CRBSI occurred in 26 (31.3%) patients; MICs for vancomycin and daptomycin were higher in these patients (optimal cutoff values for predictive accuracy = 1.5 μg/mL and 0.5 μg/mL). High MICs for vancomycin (hazard ratio 2.4, 95% CI 1.2–5.5) and daptomycin (hazard ratio 2.4, 95% CI 1.1–5.9) were independent risk factors for development of complicated MSSA CRBSI. Our data suggest that patients with MSSA CRBSI caused by strains that have high MICs for vancomycin or daptomycin are at increased risk for complications.
Staphylococcus aureus bacteremia is an issue of concern because of high rates of illness and death for this condition (1). Some studies have identified high MICs for vancomycin (defined as an MIC >1.5 μg/mL by E-test) as a simple laboratory-based marker, which has been shown to be associated with a worse prognosis in methicillin-resistant S. aureus (MRSA) bacteremia in terms of treatment failure (2–4) and increased mortality rates (5,6). Such increased mortality rates associated with a high MIC for vancomycin has also been reported in methicillin-sensitive S. aureus (MSSA) bacteremia (7,8). However, the use of death as a study outcome and the fact that these studies were performed with patients with different sources of bacteremia make it difficult to interpret study results. Such findings could not be confirmed in large cohorts of patients with MRSA (9–11) or MSSA (12) bacteremia from different sources.
To avoid these confounding factors, we focused on a more homogeneous population of patients with MSSA catheter-related bloodstream infection (MSSA CRBSI) for whom specific efforts were devoted to optimize clinical management. In a previous retrospective study, we observed that high MICs for vancomycin were associated with development of complicated MSSA CRBSI, regardless of the initial antimicrobial drug therapy used (vancomycin or β-lactams), which suggested that intrinsic characteristics of these strains might explain their pathogenic role in development of complicated bacteremia (13). We designed this multicenter prospective study to confirm the prognostic role of high MICs for vancomycin and to explore if increased MICs for other antistaphylococcal agents could also influence the risk for developing complicated MSSA CRBSI.

We conducted a prospective, observational, multicenter study during April 2011−June 2014 in 5 hospitals in Spain in which we included patients given a diagnosis of MSSA CRBSI according to standard a definition (14) that fulfilled 5 criteria: 1) age >18 years and a life expectancy >7 days; 2) no use of daptomycin within the 3 months preceding the incident MSSA CRBSI episode; 3) removal of the intravascular catheter suspected to be the source of CRBSI within a maximum of 72 hours from sampling of the first blood cultures yielding MSSA; 4) a maximum of 72 hours of treatment with glycopeptides; and 5) at least the first blood culture isolate available for microbiological analysis. All included patients signed a study-specific informed consent form. The study was approved by the ethics research boards at all participating centers.

Although the nature of the study was not interventional, the adherence to evidence-based quality-of-care measures was strongly encouraged among participating investigators to optimize the therapeutic management of MSSA CRBSI. These measures were extraction of follow-up blood cultures, ordering echocardiography or venous Doppler ultrasound examination for patients with clinical indication, early use of intravenous cloxacillin or other highly effective antimicrobial drugs for treatment of for MSSA as definitive therapy, and adjustment of treatment duration according to the complexity of the infection.

Recorded clinical variables were age; site of acquisition of infection; concurrent conditions, as assessed by the Comorbidity Index of Charlson et al. (15); prognosis of the underlying disease (classified according to the McCabe and Jackson modified criteria as rapidly fatal [when death was expected within 3 months], ultimately fatal [when death was expected within a period of >3 months but <5 years] and nonfatal [when life expectancy was >5 years]) (16); type of intravenous catheter; timing of catheter removal; treatment administered; duration of fever; duration of bacteremia; Pitt bacteremia score (17); development of septic shock; endovascular infection or complicated bacteremia (defined below); and all-cause and MSSA CRBSI−attributable mortality rates at 30 days. MSSA CRBSI−attributable deaths at 30 days were identified as per the clinical judgment of the investigator.
Antimicrobial drugs were classified within 1 of the following mutually excluding categories: glycopeptides; daptomycin; antistaphylococcal β-lactams (parenteral cloxacillin, cefazolin or other active β-lactams [including parenteral amoxicillin/clavulanate, piperacillin/tazobactam, imipenem, or meropenem]); non−β-lactam agents with in vitro activity against MSSA (antistaphylococcal quinolones, tigecycline, or linezolid); and noneffective agents. Timing to initiation of antimicrobial drug therapy and duration of treatment were also recorded. Empiric therapy was defined as therapy administered before identification and antimicrobial susceptibility testing of the isolate. Complicated bacteremia (study outcome) was defined by 1 of 5 events occurring after the incident episode of MSSA CRBSI: 1) development of endocarditis (defined according to modified Duke criteria) (18); 2) septic thrombophlebitis (defined by persistent MSSA bacteremia for >72 hours after the initiation of active therapy associated to the documentation of a thrombus at the site of catheter insertion); 3) septic metastatic infection, including arthritis, spondylitis, infections involving vascular or osteoarticular prostheses (excluding intravascular catheter) or end-organ hematogenous seeding to other locations remote from the primary focus; 4) persistent bacteremia for >72 hours; or 5) persistent fever for >4 days after extraction of the first blood culture yielding MSSA, provided that alternative causes had been reasonably excluded (19).

Blood cultures were processed and isolates were identified according to standard techniques at each participating center. The first MSSA isolate from each patient was stored at −80°C until analysis and sent to the central reference laboratory (Department of Microbiology, University Hospital 12 de Octubre, Madrid, Spain). We subsequently subcultured strains twice and performed antimicrobial susceptibility testing by using the E-test method according to manufacturer’s recommendations (AB bioMérieux, Solna, Sweden). We tested vancomycin, daptomycin, oxacillin, and linezolid. In addition, the E-test macromethod was performed to screen for heteroresistant vancomycin-intermediate S. aureus (hVISA) (20). All the plates were visually read throughout the entire study period by 2 independent observers, who were blinded to each other and to the clinical outcomes. Interobserver discrepancies were resolved by reevaluation and a consensus decision.

We used the Student unpaired t-test to compare normally distributed continuous variables, the Mann-Whitney U test to compare continuous variables with non-normal distribution, and the χ2 and Fisher exact tests to compare proportions as appropriate. Areas under receiving operating characteristic curves for MICs for selected antistaphylococcal agents (on the basis of their discriminative value at the univariate comparisons) were plotted to select the optimal cutoff value in terms of sensitivity (S) and specificity (Sp) to distinguish between patients with or without complicated bacteremia by means of the Youden’s J statistic (J = S + Sp −1). We calculated the Pearson correlation coefficient (ρ) to assess the strength of the linear relationship among E-test MICs for daptomycin and vancomycin.
To test the effect of high MICs for antistaphylococcal agents and other clinical variables on the occurrence of complicated MSSA CRBSI, we plotted event-free Kaplan-Meier survival curves and performed comparisons between groups by using the log-rank test. Statistically relevant variables (p<0.10) at the univariate level were entered into multivariate Cox proportional hazard models with a backward stepwise selection, and hazard ratios (HRs) with 95% CIs were estimated. Some variables considered clinically relevant were also forced into the models regardless of their univariate p values. All statistical tests were 2-tailed, and the threshold of statistical significance was set at p<0.05. We used statistical software SPSS version 20.0 (SPSS, Inc., Chicago, IL, USA) to perform calculations of different analysis and generated graphics by using Prism version 6.0 (GraphPad Software Inc., La Jolla, CA, USA). Variables with an unacceptable proportion of missing values (>30%) were excluded from the analysis.

Of 108 patients initially recruited, 19 were excluded because they did not fulfill inclusion criteria after revision of the clinical charts (13 had received >72 hours of treatment with vancomycin and 6 had had a delay of >3 days in catheter removal). An additional 6 patients cases were excluded because of inability to recover the MSSA strain for microbiological analysis. Therefore, we included 83 patients in the final analysis; median follow-up was 479 days (range 5 days–1,014 days). No variables were excluded because of missing data. None of the included patients had received vancomycin, daptomycin, oxacillin, or linezolid within the 3 months preceding the incidence MSSA CRBSI episode.
We compared the main demographic and clinical characteristics of the 83 patients in the final cohort (Table 1). Catheter removal was performed for all patients within the first 72 hours from sampling of the first blood cultures and, in most (75 [90.6%]) patients, within the first 48 hours. Antistaphylococcal β-lactams were used as empiric therapy in 43 patients (51.8%), glycopeptides in 32 (38.5%), and daptomycin in 17 (20.4%). Combined therapy was used for 25 (31.1%) patients. Twelve (14.5%) patients received no empiric therapy or the regimen administered was based on antimicrobial drugs with no in vitro activity against MSSA. For all patients who received daptomycin, the dose used was >6 mg/kg/day (range 6−10 mg/kg/day). Venous Doppler ultrasound examination and echocardiogram were performed for 41 (49.5%) and 61 patients (73.5%), respectively.
Complicated MSSA CRBSI developed in 26 patients (31.3%) at a median of 4 days (interquartile range [IQR] 1–26 days) after sampling of blood cultures. No patients had late complications (i.e., >30 days). Septic thrombophlebitis was the most frequent complication (10 patients [12%]), followed by right-sided endocarditis (2 cases [2.4%]), hematogenous osteoarticular infection (2 cases [2.4%]), and pulmonary emboli (2 cases [2.4%]) (Technical Appendix[PDF - 332 KB - 3 pages]Table 1). All-cause and MSSA CRBSI−attributable 30-day mortality rates were 12.0% and 2.4%, respectively.

Correlation between MICs and Outcome 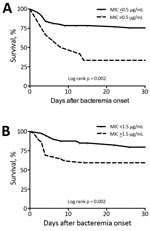 Figure. Event-free Kaplan-Meier survival curves for complicated bacteremia according to E-test MICs for daptomycin (A) and vancomycin (B) for complicated catheter-related bloodstream infections with a methicillin-sensitiveStaphylococcus aureus isolate.
We compared clinical characteristics of patients with or without complicated bacteremia (Table 4). Most (65.4%) patients with complicated cases were given a diagnosis at 1 recruiting center. Such an imbalance might be partially explained by the fact that such a center was the study promoter and the largest center at which the greatest diagnostic efforts were made. The probability of remaining free of complicated bacteremia at day 30 was significantly lower for patients with MSSA CRBSI caused by isolates with daptomycin MICs >0.5 μg/mL (33. 3% vs. 75%; log-rank test p = 0.002) and isolates with vancomycin MICs >1.5 μg/mL (59.2% vs. 79.6%; log-rank test p = 0.02) (Figure).
Because of low number of patients with complicated bacteremia (26 episodes), we could not assess the potential effect of MICs by performing a single logistic regression model adjusted for all the covariates found to be significant by univariate analysis. We alternatively attempted an exploratory approach based on different models. We used Cox regression models that incorporated a maximum of 3 variables at a time, always including the recruiting center as a potential confounder (Table 5; Technical Appendix[PDF - 332 KB - 3 pages]Table 2). The presence of high MICs for vancomycin (minimum adjusted HR 2.4, 95% CI 1.2–5.5) and daptomycin (minimum adjusted HR 2.4, 95% CI 1.1–5.9) were kept as independent risk factors for development of complicated MSSA CRBSI in all models.
We performed a sensitivity analysis by restricting the study outcome to the occurrence of septic thrombophlebitis. These associations remained essentially unchanged, and we observed even higher HRs (minimum adjusted HR for vancomycin MIC 6.0 [95% CI 0.7–52.2]; minimum adjusted HR for daptomycin MIC 5.5 [95% CI 1.3–22.5]) (Technical Appendix[PDF - 332 KB - 3 pages]Tables 2, 3).