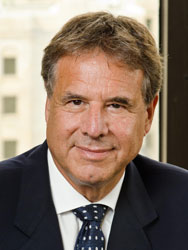 Alain Beaudet, M.D., Ph.D.
​Dr. Alain Beaudet is president of the Canadian Institutes of Health Research and recently became chair of the Global Alliance for Chronic Diseases (GACD). He previously headed the Québec government's Fonds de la Recherche en Santé du Québec for four years. Before that, he served at the Montreal Neurological Institute, where he conducted research on the action mechanisms and role of neuropeptides in the central nervous system, among other topics, and served as associate director of research. He has authored more than 175 original articles and 40 monographs and book chapters.

What is the GACD's unique role?
I remember the discussions at the very first board meetings were a bit like, "We're trying to boil the oceans here. This is a huge undertaking - how can we make a difference?" We identified a number of priority areas and implementation science research was at the top of the list. The second was research conducted in partnership with research users, if possible policymakers. This is something we will have to push further as we consider bringing some of our results to scale and working even more closely at the national level with some of the research users.
Another goal was ensuring the creation of implementation science networks - sharing good practices. That's where a consortium like the GACD plays a critical role. Rather than having different countries do superb things in isolation, it's almost a GACD club within the networks of the funded researchers - networks on implementation science in hypertension, diabetes and soon chronic pulmonary diseases. And they collaborate with each other, given their similar approaches and issues in implementing the interventions. 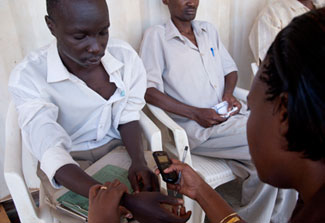 Photo by Richard Lord for Fogarty/NIH
Support from the Global Alliance for Chronic Diseases (GACD) is
helping to form implementation science networks in hypertension,
diabetes and chronic pulmonary diseases.
What is really striking is that putting these bright minds together in an international setting is enabling far more powerful sharing of good practices than occurs with countries working in isolation. And also, in due time, this will give us the capacity to work with other organizations - I'm thinking the WHO, which is already an observer at the GACD and is taking a keen interest in the research we are developing, but also the World Bank, the Gates Foundation and others. This is ensuring an international level of scientific excellence in what we are funding.
What has GACD learned so far?
We've learned that these networks take on a life of their own - and to me that's the most exciting thing. They have elected leaders and have started meeting regularly, standardizing their approaches for gathering data, and are actually writing together. They've put out papers on implementation science, developed the methodologies they share and are now discussing developing repositories for the data they produce. So, there's been huge progress and it evolved because we did something right in the first place by bringing the teams together to form international networks.
The other thing that we've realized is that, in some countries, we were not explicit enough about involving decision makers and research users that would be integral to formulating the research objectives, defining research protocols, and fully integrating them into the projects to ensure an uptake and dissemination of the results in due time.
What's the next phase?
With each call for applications, we've actually increased the pressure and the need to have integrated knowledge translation rather than token involvement of knowledge users. As we move forward, we have to go even further. We need to discuss at a national level the possibility of true partnerships within countries to scale up some of the successful interventions. For instance, hypertension 2.0 should not be a mere renewal of prior grants with the same group and they go on forever. It has to be something more. We have to progress, be innovative, be creative. And we have to use the tremendous lobbying power that comes from so many countries represented and working together around the same table and investing jointly. The GACD is a fairly young organization and we've invested more than $100 million already and that's going to go on increasing. We have to use our impact to ensure sustainability and scale-up of successful interventions.
Does GACD plan to target mental health research?
It will come in due time. One issue is the huge difficulty on the diagnostic side. In hypertension, the diagnosis is pretty straightforward, but in mental health, it's a little more complex. There's huge stigma issues everywhere, more pronounced in some countries than others. The GACD is focused on implementation science, intervention research, and working with decision makers and policymakers to better understand interventions, why programs are effective or not, how we can make effective programs sustainable and cost-efficient, and how we can increase access to these programs. We're moving toward better describing the research questions around mental health and I feel confident that we'll be able to tackle this issue.