New results from the 2015 National Youth Risk Behavior Survey (YRBS) show that while the prevalence of cigarette smoking among high school students dropped to the lowest levels since the survey began in 1991, the use of e-cigarettes among students is posing new challenges.
Although the prevalence of current cigarette use decreased significantly from 28% percent in 1991 to 11% in 2015, new data from the 2015 survey found that 24% of high school students reported using e-cigarettes during the past 30 days.
Significant progress has been made in reducing physical fighting among adolescents. Since 1991, the percentage of high school students who had been in a physical fight at least once during the past 12 months decreased from 42% to 23%. However, nationwide, the percentage of students who had not gone to school because of safety concerns is still too high, with 6% of students missing at least 1 day of school during the past month because they felt they would be unsafe. 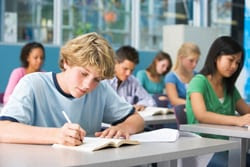 CDC's YRBSS is the only surveillance system designed to monitor a wide range of priority health risk behaviors among representative samples of high school students at the national, state, and local levels.
National, state, and local surveys are conducted every 2 years among high school students throughout the United States. These surveys monitor priority health risk behaviors including unintentional injuries and violence; tobacco, alcohol, and other drug use; sexual behaviors related to unintended pregnancy and sexually transmitted diseases, including HIV infection; unhealthy dietary behaviors; and physical inactivity. These surveys also monitor the percentages of students affected by obesity and asthma. 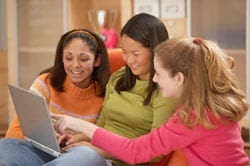 The percentage of high school students using a computer 3 or more hours per day nearly doubled―from 22% in 2003 to 42% in 2015.
More than 15,000 U.S. high school students participated in the 2015 National YRBS. The 2015 report includes National YRBS data and data from surveys conducted in 37 states and 19 large urban school districts.
The 2015 YRBS results are now available on the YRBS Website. Available materials include —
To receive timely e-mail updates about YRBSS data and new products, subscribe at the Youth Risk Behavior Surveillance System (YRBSS) website.

CDC works with other federal agencies, national nongovernmental organizations, and state and local departments of education, health, and social services to —
We all have a role to play in ensuring the health of our nation's youth. Families, schools, community organizations, and teens must work together to help address these health risk behaviors.