MercatorNet: In an industry that makes people, what could possibly go wrong?

MercatorNet: In an industry that makes people, what could possibly go wrong?

In an industry that makes people, what could possibly go wrong?

A lot. Because it is wrong to start with. 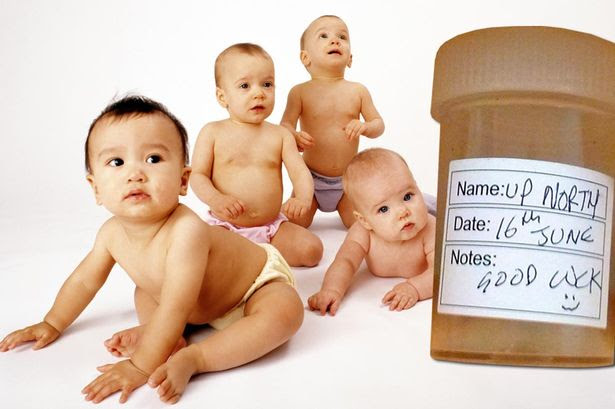 Sperm donation, egg donation and surrogacy: Third party reproduction seems to be a “done deal” in Western society. Even ardently pro-life people do not seem to see the problems. Hey, these techniques are making babies, not killing them. So what could possibly go wrong? A lot of things can go very wrong. Let me describe just one: making the choice of your child’s other parent into a commercial transaction.

A recent story from Canada in The Star illustrates the problem. The profile for Donor #9632 from the Xytex Corporation seemed particularly attractive to many women. His sperm has been used to create 36 children: 19 boys and 17 girls from 26 families. But through an inadvertant breach of confidentiality, one mother discovered the identity of Mr. 9632, and did some internet sleuthing:

The donor was nothing like the perfectly healthy man — aside from some color blindness on his dad’s side — touted on the sperm bank’s website. Nor was he working on a PhD in neuroscience engineering en route to becoming a professor of biomedical robotics at a medical school.

Instead, Chris Aggeles, a now 39-year-old man from Georgia, has struggled with serious mental illness for much of his adult life. In addition to schizophrenia, court documents show he has had diagnoses of bipolar and narcissistic personality disorders, and has described himself as having schizoaffective disorder.

He has a history of run-ins with the law, has done time in jail, dropped out of college and struggled in the past to hold down jobs.

When confronted, the company referred the distraught mothers to the fine print in their agreement:

The donor underwent a standard medical exam and provided extensive personal and health information. He reported a good health history and stated in his application that he had no physical or medical impairments. This information was passed on to the couple, who were clearly informed the representations were reported by the donor and were not verified by Xytex.

What could possibly go wrong?

Let me spell it out: This arrangement attracts people with a narcissistic personality disorder. I have talked personally with a number of donor-conceived persons who, as adults, found their biological fathers. Narcissism is not an unusual component of the personality profile.

What about the mothers?

Some of the aggrieved mothers, understandably upset, have a whole list of things they want the industry to do, in order to be more accountable, such as requiring the company to verify the information and requiring the company to keep up with the donors and report any changes in their health status to the customers, I mean, mothers. They want them to establish a fund to help the mothers of the children of Donor #9632. And so on.

But anonymous sperm donation separates a child from his or her genetic origins, and the parents from each other. This is so wrong you cannot paste enough band aids over it to make it right.

One of the mothers said she feels cheated: “I felt like I was duped by Xytex and I failed my son for having chosen Xytex. In hindsight, a hitchhiker on the side of the road would have been a far more responsible option for conceiving a child.”

I agree with her: She was cheated. But not just by the corporation. She was duped by Modern Family and The Kids Are Alright and all the other Hollywood propaganda for “alternative family forms.”

She was duped by the social scientists who have been whitewashing the fact that children need both of their parents. Divorce and single-parenthood are tough on kids. Data shows this beyond doubt. Widespread experience confirms it. Some social scientists try to explain it away.

She was duped by the culture that says that we can do anything we want sexually, and the kids will be fine. As a society, we disregard the impact on children, their health, their relationships, and their sense of identity. Adults get the sex lives they want: kids have to accept whatever the adults choose to give them.

What could possibly go wrong?

As for the mothers’ suit against the sperm bank, I don’t know what to say. Suing a commercial entity is the logical response to a situation in which the entity does not perform in a satisfactory manner. But a child is a human being, not a product. Donor #9632 is not an abstraction: He is the biological father of these children, genetically, half of who they are.

The aggrieved mother continued: “Who would have thought that an industry that makes people would be like this?”

On the contrary: this is exactly what I thought an industry that makes people would be like.

We don’t need an industry that makes people.

Because a whole lot can go wrong.

Jennifer Roback Morse Ph.D. is Founder and President of the Ruth Institute, a global non-profit organization, dedicated to creating a Christ-like solution to family breakdown.Visit at www.ruthinstitute.org or facebook.com/TheRuthInstitute/

This article was first published on The Blaze and has been republished with permission.

Jennifer Roback Morse Ph.D. is Founder and President of the Ruth Institute, a global non-profit organization, dedicated to creating a Christ-like solution to family breakdown. Visit at www.ruthinstitute.org or facebook.com/TheRuthInstitute/
- See more at: http://www.mercatornet.com/articles/view/in-an-industry-that-makes-people-what-could-possibly-go-wrong/17967#sthash.qr6uNpJ7.dpuf

The Fourth Amendment of the United States Constitution reads:
The right of the people to be secure in their persons, houses, papers, and effects, against unreasonable searches and seizures, shall not be violated, and no Warrants shall issue, but upon probable cause, supported by Oath or affirmation, and particularly describing the place to be searched, and the persons or things to be seized.
The intention seems perfectly clear: the government should stay away from you and your property unless they have demonstrably good cause to do otherwise.
How did this principle we call the “right to privacy” become transformed over the space of 250 years into an excuse for the government to hover protectively over people’s choices regarding contraception, abortion, homosexual relationships (and probably– according to current claims – the use of female public bathrooms by males who think they are females or vice versa)?
In an extremely helpful essay written for The Family in America journal, William C. Duncan, Director of the Marriage Law Foundation, provides an answer: privacy has evolved through court decisions into a right to define one’s own reality:
In other words, the negative right to be left alone is long gone, replaced by a right to have the government facilitate one’s project of self-definition.
The flip-side is that those who disagree will not have their private convictions protected.