Are People With Rosacea at Higher Risk for Alzheimer's?: MedlinePlus

Are People With Rosacea at Higher Risk for Alzheimer's?: MedlinePlus

Are People With Rosacea at Higher Risk for Alzheimer's? 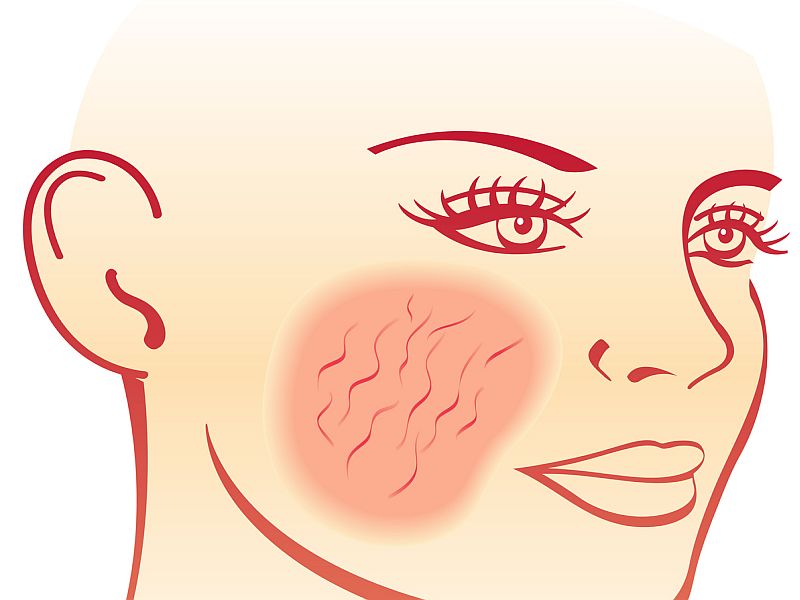 THURSDAY, April 28, 2016 (HealthDay News) -- Rosacea, the facial redness affecting millions of Americans, may be linked to a higher risk for dementia and Alzheimer's disease, new research suggests.
However, the study authors were quick to stress that people with rosacea should not be overly worried about the finding.
"It is important for patients to remember that having rosacea does not guarantee that they will develop Alzheimer's disease," said lead author Dr. Alexander Egeberg.
"In fact, while the risk in rosacea patients may be slightly increased compared with the general population, the absolute risk [to any one patient] is still quite low," said Egeberg, of the department of dermato-allergology at Herlev and Gentofte Hospital, in Copenhagen, Denmark.
According to the National Rosacea Society, roughly 16 million Americans suffer from the skin condition, which is characterized by the appearance of often disfiguring redness and acne-like markings on the face. While treatable, there is no known cure for the disease, which has no clear cause.
In the new study, Egeberg's team looked at 1997-2012 data from the Danish national health registry system. The nation's entire population -- roughly 5.6 million men and women -- were included. About 82,000 had rosacea.
The investigators determined that people with rosacea faced a seven percent greater likelihood for developing any form of dementia, and a 25 percent higher risk for Alzheimer's disease in particular, than people without rosacea.
Women seemed more affected than men. The data showed that women with rosacea had a 28 percent greater risk for Alzheimer's, compared with a 16 percent higher odds for men with the skin condition.
Age also seemed to play a role. The study found that Alzheimer's risk for rosacea patients went up significantly -- by 20 percent -- for those who were 60 or older when they first enrolled in the study.
Still, Egeberg stressed that the study could only point to an association between dementia and rosacea, and "does not necessarily mean that a causal link exists."
The findings were published April 28 in the Annals of Neurology.
The new study is not the first to link rosacea to neurological disorders. Earlier this year, Egeberg led an investigation that tied the skin condition to a heightened risk for Parkinson's disease. Those findings were published in the journal JAMA Neurology.
Egeberg called the new study "the first comprehensive investigation of Alzheimer's disease in a large population of patients with rosacea."
So, what might explain the possible rise in dementia risk for people with the condition?
"Certain proteins and inflammatory processes have been found in increased levels in the skin of patients with rosacea," noted Egeberg, "These have also been linked to dementia, in particular Alzheimer's disease," he added. However, "while this may be one potential explanation, we cannot say for sure that this is the cause."
Dr. Anton Porsteinsson directs the Alzheimer's Disease Care, Research and Education Program at the University of Rochester School of Medicine and Dentistry, in Rochester, N.Y. He agreed that "there may be common processes that put you at risk for both disorders."
"The important next step leading from this finding," he said, "is to better understand the underpinning of both conditions and if treatment targets or lifestyle modifications can be discovered that impact the risk of developing these conditions. It will also be interesting to examine if successful treatment of one condition has an impact on the course of the other."
In the meantime, Porsteinsson advised patients with rosacea, particularly those 60 and older, to pay attention to any meaningful decline in short-term memory, word-finding, decision-making, and/or navigation in their later years -- over 60. "Clinicians should [also] be aware of this risk association," he said.
SOURCE: Alexander Egeberg, M.D., Ph.D., department of dermato-allergology, Herlev and Gentofte Hospital, University of Copenhagen, Denmark; Anton Porsteinsson, M.D., professor, psychiatry and neurology, and director, Alzheimer's Disease Care, Research and Education Program, University of Rochester School of Medicine and Dentistry, Rochester, N.Y.; April 28, 2016, Annals of Neurology.
HealthDay
Copyright (c) 2016 HealthDay. All rights reserved.
News stories are provided by HealthDay and do not reflect the views of MedlinePlus, the National Library of Medicine, the National Institutes of Health, the U.S. Department of Health and Human Services, or federal policy.