An analysis of the Supreme Court's hearing of arguments on a restrictive law. 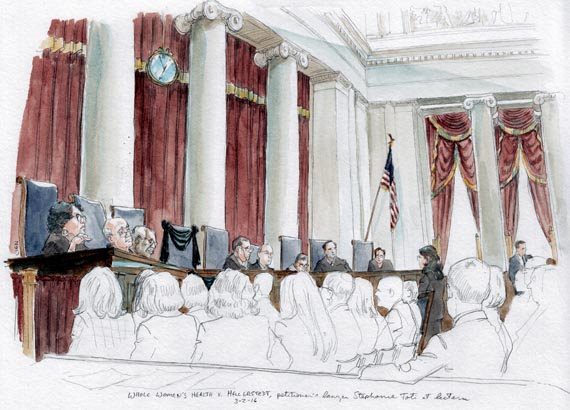 It was unmistakably clear on Wednesday [March 2] that the Supreme Court’s first close look at abortion rights in nine years will turn on the reaction of Justice Anthony M. Kennedy, and there were at least sturdy hints that he would lead the Court in one of two directions.  In an intense argument in Whole Woman’s Health v. Hellerstedt that ran twenty-six minutes longer than scheduled, Kennedy seemed poised to find a way out of a four-to-four split — if the initial vote comes to that — or to strike down by a narrow vote the two restrictions at issue in the 2013 Texas law, known as “HB2.”

Within minutes after the argument began shortly after ten o’clock, it seemed that the case might bog down in a dispute about whether the case contains any solid evidence of whether HB2 was, in fact, the cause for the sudden closing of half of all abortion clinics in the state and would cause even more to close if the Justices upheld the law’s two main clauses.  The two are a requirement that all abortion doctors have a professional privilege to admit patients to a nearby hospital, and a requirement that all abortion clinics upgrade to facilities capable of performing surgery.  There was even some question about whether the admitting privilege was still at issue.

But when the argument turned from the reason for closures to a question of the capacity of any remaining clinics to handle the tens of thousands of abortions that women in the state seek every year, the case shifted abruptly.  It was Kennedy who raised the possibility that the case be sent back to lower courts to allow lawyers to put in evidence about that capacity question.

First, it would allow the Court to avoid a decision about the validity of either part of the Texas law, if it should turn out that, at Friday’s planned discussion of the case in a private Conference, the initial vote came out split four to four (the late Justice Antonin Scalia was a fervent foe of making abortion a constitutional right).  Returning the case for gathering of new evidence would avoid that outcome — indeed, any immediate outcome — and thus would avoid the even division that settles nothing and always disappoints the Court.  It might even put off the case until the current vacancy on the bench is filled with a new Justice.

Second, of equal or perhaps even greater importance, there may have been a logical basis for that suggestion and it could have been in Kennedy’s mind.  If he had any inclination to uphold either or both of the provisions, Kennedy would understand that this would probably lead to a four-to-four tie.  But taking that position would mean he had done so without knowing whether the capacity of the remaining clinics — nine or ten at most — would be enough to handle all abortions that would be sought in the state (recently, between 60,000 and 75,000 a year)?  Thus Kennedy might hesitate even more to push the Court into a tie vote.

Third, Kennedy’s hesitation on taking a stand on the merits of the law seemed even more likely because of a question he asked later in the argument.  He pressed the lawyer for Texas, state Solicitor General Scott A. Keller, on whether the enforcement of the two provisions would actually lead more women to have more abortions through surgery, by forcing them to wait, with more risk than having an earlier abortion through the use of drugs that induce termination of pregnancy (“medical abortion”). 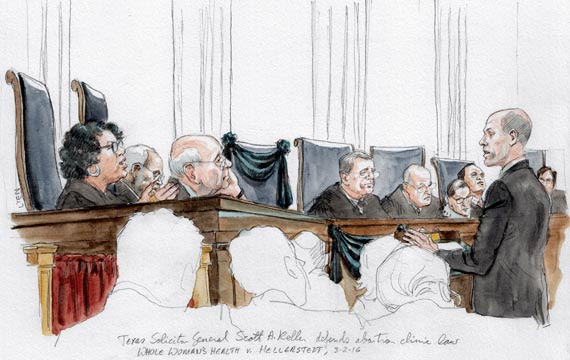 Texas Solicitor General Scott A. Keller (Art Lien)
Kennedy cited data that the number of drug-induced abortions had increased nationally, but the number in Texas was down, and he commented that “this may not be medically wise.”  The abortion clinics and doctors who are challenging the Texas laws have made that prospect a part of their argument that the two provisions impose an unconstitutional burden on Texas women’s constitutional right to seek an abortion, and Kennedy appeared to have taken that seriously.

Returning the case to lower courts to get more evidence on the incidence of later abortions might be one way to deal with that prospect, but so would striking down the law — by a five-to-three vote — because of the negative consequences of inducing more mid-term abortions.  Since Roe v. Wade, the Court (including Kennedy since he joined the bench) has always been more comfortable with earlier abortions, partly because they are safer but also because of a concern for protecting the developing life of the fetus.  Kennedy was a key part of the Court’s compromise ruling in 1992 (Planned Parenthood of Southeastern Pennsylvania v. Casey) when the Court expressed new support for state power to protect potential life, an interest that was said to increase the longer a pregnancy continues. 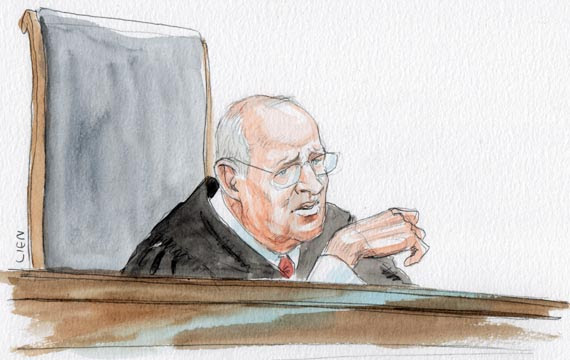 Justice Kennedy (Art Lien)
The Justices will cast at least a preliminary vote on the case when they assemble on Friday morning for a private Conference.  If the case is going to be sent back to lower courts, or if the Court essentially gives up and casts a four-to-four vote, those outcomes might be announced quite soon, perhaps as early as next Monday.  There is, of course, the possibility that more discussion would be necessary to sort out where the Court wants to go.

Going into Wednesday’s argument, it was already clear that the Justices disagreed deeply about the enforcement of the Texas law.  The Court split five to four in last June in limiting enforcement of the law, and the line-up then was quickly evident by comments and questions from the bench by all of the Justices (except Justice Clarence Thomas, who did not say anything).

The four more liberal members of the Court — Justices Stephen G. Breyer, Ruth Bader Ginsburg, Elena Kagan, and Sonia Sotomayor — energetically challenged the lawyer for Texas, and often did so in words that denounced what the Texas legislature could have been thinking in passing the restrictions.  Justice Sotomayor was so diligent that she even went on with questions after Chief Justice John G. Roberts, Jr., signaled that the lawyer then at the lectern was finished.

On the other side, the Chief Justice and Justice Samuel A. Alito, Jr., were dogged in tough questions to Stephanie Toti of New York City, a lawyer for the Center for Reproductive Rights, speaking for the abortion clinics.  Alito, in particular, tried a variety of tactics to try to shore up the law’s legality, and to question the challenge to it. 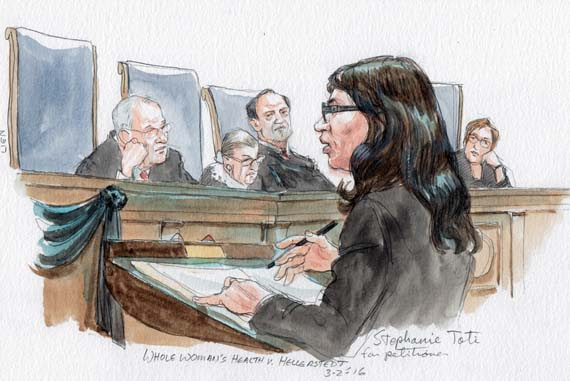 Stephanie Toti for petitioners (Art Lien)
Thus, it was, as expected, that Kennedy would hold the dominant role at the argument.  Of course, he had voted in the five-to-four majority last Term to temporarily put on hold a ruling by the U.S. Court of Appeals for the Fifth Circuit upholding both parts of the Texas law.  But he also has accepted, in a prior ruling, the suggestion by abortion foes that some women come deeply to regret having had an abortion.

It did not take Kennedy but a moment to join in the argument Wednesday.  He was one of those questioning the perceived failure of the challengers to the Texas law to have put in the record of the case specific evidence of why more than half the clinics in Texas existing before HB2 was passed had closed.  The challengers insist that some did so in anticipation of not being able to comply, and others closed on the day that the law went into effect.  But several members of the Court were puzzled by what they deemed an inadequate record on that point. 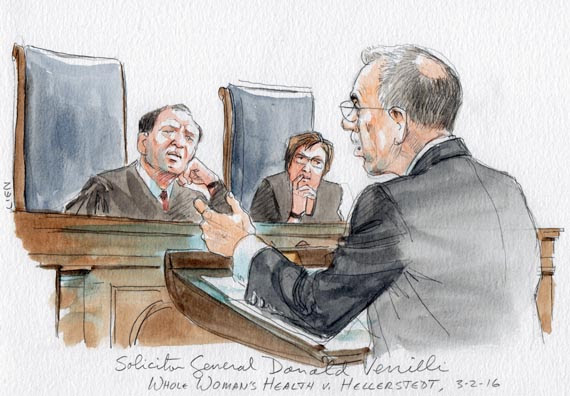 Solicitor General Donald Verrilli (Art Lien)
Toti was supported in the challenge to the law by the Obama administration’s top Supreme Court advocate, Solicitor General Donald W. Verrilli, Jr.  In his turn at the lectern, Verrilli tried to shore up the challengers’ evidence on why so many Texas clinics had closed.  He also commented on the question of whether the remaining clinics, not closed in the wake of the law, could handle the capacity.  He said they could not — a point to which Kennedy responded favorably.  And Verrilli finished his brief stint with a condemnation of the Texas law as the most onerous restriction on abortion rights that the Court had yet confronted, and argued that what was at issue in this case was whether women’s right to abortion would “only really exist in theory and not in fact.”

Reproduced under a Creative Commons Licence from the SCOTUSblog
- See more at: http://www.mercatornet.com/articles/view/two-options-on-a-texas-abortion-law/17735#sthash.k8QezfWO.dpuf

At this distance, it is looking like a Trump vs Clinton battle for the US Presidency in November. It could be quite dispiriting for those who believe in human dignity. Mr Trump is a demagogue who seems to say whatever will get him applause, even advocating the use of torture. Mrs Clinton is a passionate defender of abortion rights and same-sex marriage. What a choice!
Some people's instinct is to pull a blanket over their heads and turn out the lights. Fr James Schall, a distinguished scholar and political philosopher, reviews varieties of this response from past eras -- and rejects them. A good citizen cannot withdraw from the public square, he contends. It's a very insightful essay. Read it below.