MercatorNet: The only incurable thing is the will to live!

MercatorNet: The only incurable thing is the will to live!

The only incurable thing is the will to live!

An Italian doctor who requires full-time care is still a high achiever. 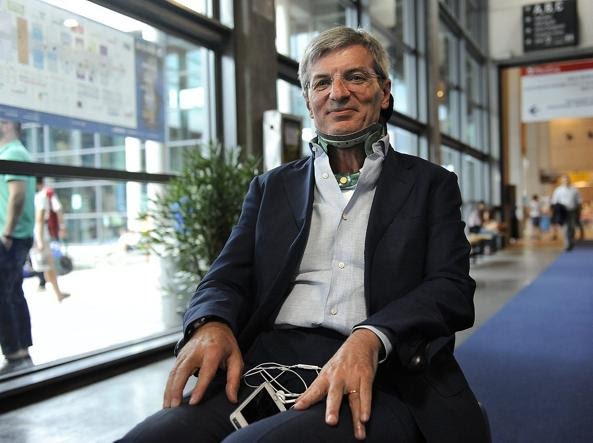 Mario Melazzini at work in Rome
Monday, February 29, was Rare Disease Day, an international initiative to promote awareness of the thousands of crippling disorders. It’s a good opportunity to highlight how courageously their victims deal with adversity.

It would hard to find a better example of this than the new chairman of the board of Italy’s peak body for regulating pharmaceutical products, Agenzia italiana del Farmaco (AIFA), Mario Melazzini.

Melazzini was appointed by the Minister of Health in January, after his predecessor resigned over conflict of interest issues. He was an unusual choice. For about 20 years he practiced as a cancer specialist. But for the last 14 years he has suffered from Amyotrophic Lateral Sclerosis (ALS or Lou Gehrig’s disease), the same ailment as the famous theoretical physicist Stephen Hawking.

He has to use a ventilator to breath properly; he needs a wheelchair for mobility; he is fed intravenously; and he needs constant care.

Despite all this, he has ticked off an impressive list of achievements. He is president of Aris, the Italian research foundation for ALS; he is a former councillor for health and research in the region of Lombardy, and he is the author of five books about disability, euthanasia and his own wrestling match with ALS.

His latest book was published late last year, Lo sguardo e la speranza: La vita è bella, non solo nei film (The look and the hope: life is beautiful, and not just in the movies – not available in English). The title, a sly reference to the Oscar-winning Italian film Life is Beautiful, sums up his own philosophy of life.

He recently explained what he meant in an interview with  Business International, an Italian magazine:

When I started to look at my disease with fresh eyes, I understood it and made a fresh start on life. The moment I stopped thinking about what I could not do because of ALS, but what I could still do for myself, for my children and friends, my life changed …

Life is a gift, an asset which must be nurtured from the moment of conception to natural end, even with illness. Life must not be manipulated according to an ideology. We need to realise that in any condition, when properly supported, everything can be seen as a great opportunity … The only incurable thing is the will to live!

This optimism has been hard-won. In the months after he was diagnosed with ALS in 2002, he felt that his life was not worth living. He was becoming completely dependent on other people. He had lost weight and could eat and drink only with great difficulty. A PEG tube had been inserted into his stomach to feed him. There had been medical crises.

One day in 2003 he typed “assisted suicide” into a search engine and found Dignitas, a Swiss clinic which helps foreigners to die in Zurich. He rang them and made an appointment – but eventually decided not to go. He began to realise that life was too beautiful and precious.

His participation in public life is a remarkable effort for a man who is so physically limited.

Melazzini’s Catholic faith has sustained him throughout his illness, especially by reading the Old Testament book of Job, the just man stripped of everything he loved and owned. But his expectation of miracles is modest – not the miracle of a cure, but the miracle of acceptance:

The miracle is not walking, drinking and many other things that I can no longer do. The miracle is serenity and an awareness of my limitations. I can’t ask for anything more than what I had. I thought that I would be dead after a few years of illness, and instead, here I am, alive and active…

The miracle happened: I opened my heart. I was locked into myself. Now I am open to myself and this allowed me to open up wide to others.

He says that he has been very influenced by Fr Luigi Giussani, the founder of an important Catholic group called Comunione e Liberazione. From him he learned that even with his immobility, he was still free. “With all my problems I was still happy.” His Christian outlook gave him hope:

Hope [he writes in Lo Sguardo e la Speranza] is a path that can lead to a better space. Pain and suffering, as such, are neither good nor desireable – but that doesn’t mean that they are meaningless. And suffering can be contextualised and treated as a life experience.

He concludes the book with a remarkable idea: that sickness of the body can restore a sick soul to health:

In our day-to-day lives, all of us will meet suffering sooner or later, and not just physical pain, sickness and frailty. We ought to be able to treasure it, turning it into something valuable in our path through life… And the disease can really become a form of health. It’s healthy because it allows us to feel useful again for ourselves and for others, beginning with the family and including friends and colleagues. It’s healthy because it helps us to realise that in life one should never take anything for granted, not even a glass of water sipped without choking. 1278

It’s a remarkable story of a brave and wise man, though marred by his decision to split with Daniela, the wife who had cared for him and borne his three children. Last year he married Monica, a divorced woman with two children of his own whom he had met through the ALS association.

Divorce, of course, is forbidden by his Church, so the couple had to be married in a garden by a local official, not in a church. But in one of those baffling inconsistencies that bedevil our nature, Melazzini remains an enthusiastic Catholic.

Oh well. Even heroes are human.

Michael Cook is editor of MercatorNet
- See more at: http://www.mercatornet.com/articles/view/wheelchair-bound-but-full-of-hope/17703#sthash.s7RDChMa.dpuf

In the same week that Spotlight received an Oscar for best picture, Cardinal George Pell has been giving testimony by video from Rome to the Australian Royal Commission into institutional responses to sexual child abuse. It is a humiliating time for Catholics and perhaps a bewildering one, given the Cardinal’s frank admission that he was more inclined to believe the word of a priest rather than the odd rumour that one had been molesting children.
But, as Austen Ivereigh of Catholic Voices UK argues in his fine article on the subject, Cardinal Pell’s attitude at the time was not a shocking aberration but something typical in the context of 30 to 40 years ago. If it wasn’t, we would have heard about Jimmy Saville’s victims a long time ago. In describing that context Ivereigh excuses nothing; he simply tells it like it was. And in doing so he shows why “All our institutions need to sit in sackcloth and ashes and repent their collective deafness to the voice of victims.”
Xavier Symons, a fellow Australian of a younger generation, also has something to say about this episode