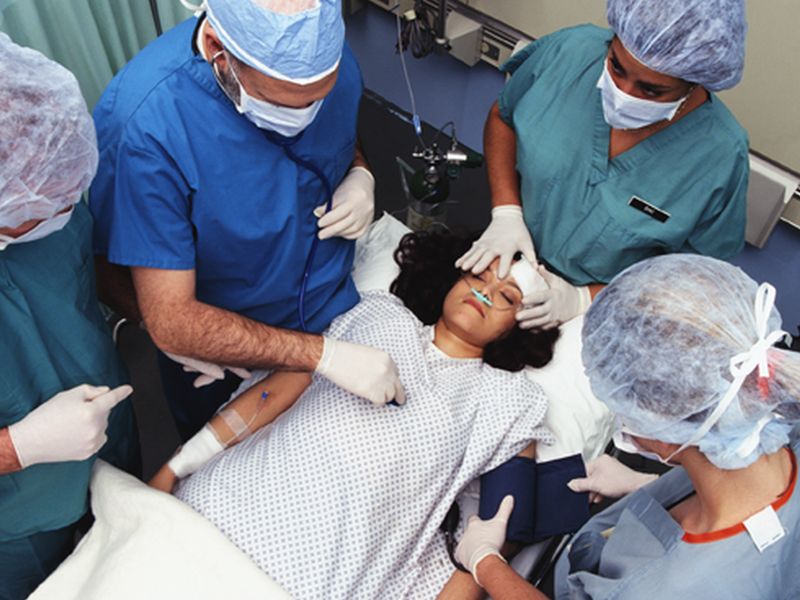 WEDNESDAY, March 2, 2016 (HealthDay News) -- Contrary to longstanding concerns, pregnant older women who have their labor induced near their due date may not face an increased risk of needing a cesarean section, a new clinical trial suggests.
British researchers found that when older first-time moms had their labor induced during the 39th week of pregnancy, they were at no greater risk of a C-section -- or any other negative effects for themselves or their newborns.
Experts said the study, published in the March 3 issue of the New England Journal of Medicine, suggests that labor induction is safer than doctors have thought.
But the question remains: Is there any benefit to doing it when a woman is having a healthy pregnancy?
"There's no clear evidence that there is," said Dr. William Grobman, a professor of obstetrics and gynecology at Northwestern University Feinberg School of Medicine, in Chicago.
"This was a very good study, but it shouldn't lead to any massive change in practice," said Grobman, who wrote an editorial published with the study.
Officially, labor induction is recommended only in certain circumstances -- such as when a woman has a medical condition that is putting her or her baby at risk, or if pregnancy goes beyond 42 weeks. (A full-term pregnancy lasts about 40 weeks.)
Labor induction for certain nonmedical reasons can be done -- when a woman lives far from a hospital, for instance -- but not before the 39th week of pregnancy, according to the American Congress of Obstetricians and Gynecologists (ACOG).
The new trial tested a practice that is not standard, Grobman said: Trying labor induction in women who were relatively older -- age 35 and up -- and expecting their first baby, but who were having a healthy pregnancy.
In theory, labor induction during the 39th week could prevent some late stillbirths. And previous studies have found that older women -- particularly those having their first baby -- are at greater risk of those stillbirths, said lead researcher Dr. Kate Walker.
But even with the increased risk, late stillbirth is rare. So, there's been concern that any benefit of labor induction would be outweighed by potential complications, including a failed labor that then requires a C-section.
To get some answers, Walker and her colleagues at the University of Nottingham recruited 619 women older than 34 who were having their first baby. They randomly assigned half to have a labor induction during their 39th week of pregnancy, while the rest waited for Mother Nature or had an induction because a medical problem arose.
In the end, women with a planned induction showed no greater risk of needing a C-section. One-third of women in both groups had one.
On the other hand, induction did not show any difference in health of the moms or newborns.
But that, Walker said, was because the study was not large enough to detect effects on rare complications: No woman in either group suffered a late stillbirth.
"The ideal course would now be to perform a much larger trial to prove a reduction in stillbirths," Walker said.
Grobman said he is leading just such a trial. It's already underway and aims to ultimately enroll 6,000 first-time moms-to-be -- of all ages, he noted.
The trial "has the potential," he said, to prove whether or not labor induction can carry any benefit for women with healthy pregnancies.
"But for now," Grobman said, "people should not be routinely asking for a labor induction in the 39th week."
And unless there is a medical reason, he added, inductions should never be done before week 39, to help ensure a healthy newborn.
Walker acknowledged the unknowns, but also said that some older first-time mothers might not want to wait for more clinical trial results.
"If they are offered induction of labor at 39 weeks," she said, "they can have peace of mind that it will not result in an increased risk of cesarean section, or worsening of their birth experience. This study provides evidence to help them make an informed choice."
In the United States, the rate of labor induction has dipped slightly in recent years -- after two decades of rising steadily, according the U.S. Centers for Disease Control and Prevention. In 2012, about 23 percent of all singleton births were induced.
SOURCES: Kate Walker, M.R.C.O.G., specialty trainee, obstetrics and gynecology, University of Nottingham, England; William Grobman, M.D., professor, obstetrics and gynecology, Northwestern University Feinberg School of Medicine, Chicago; March 3, 2016, New England Journal of Medicine
HealthDay
Copyright (c) 2016 HealthDay. All rights reserved.