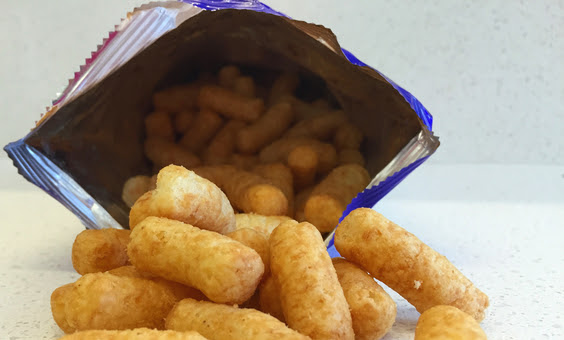 The benefits of regularly consuming peanut-containing foods early in life to prevent the development of peanut allergy persist even after stopping peanut consumption for one year, findings from the NIAID-funded LEAP-On study indicate. LEAP-On is an extension of the landmark LEAP study, which was the first to show that early introduction of peanut can prevent the subsequent development of allergy to it. The new findings suggest that regularly consuming peanut-containing foods from infancy to age 5 will offer long-lasting protection against peanut allergy.

Researchers designed the LEAP study based on observations that Israeli children have lower rates of peanut allergy than Jewish children of similar ancestry residing in the United Kingdom. Israeli children typically start consuming peanut-containing foods, including this snack made from peanuts and puffed corn, early in life. Infants in the LEAP study ate this peanut snack.
Credit: NIAID
View larger image.
​The benefits of regularly consuming peanut-containing foods early in life to prevent the development of peanut allergy persist even after stopping peanut consumption for one year, new clinical trial findings show.
The trial, called LEAP-On, was supported by the National Institute of Allergy and Infectious Diseases (NIAID), part of the National Institutes of Health, and conducted by the NIAID-funded Immune Tolerance Network (ITN)

. The results were published online March 4 in the New England Journal of Medicine and presented at the annual meeting of the American Academy of Allergy, Asthma and Immunology in Los Angeles.
The LEAP-On study is an extension of theLearning Early About Peanut Allergy (LEAP)study.  LEAP showed that regular peanut consumption begun in infancy and continued until 5 years of age led to an 81 percent reduction in development of peanut allergy in infants deemed at high risk because they already had severe eczema, egg allergy or both. At the end of LEAP, participants who enrolled in LEAP-On were instructed to avoid peanut consumption for one year to help investigators determine whether continuous peanut consumption is required to maintain protection against development of peanut allergy. After the avoidance period, peanut allergy prevalence was determined, as it was in LEAP, by an oral food challenge.  Only 4.8 percent of the children who had regularly consumed peanut-containing foods during LEAP were allergic to peanut following the year of peanut avoidance. In comparison, the prevalence of peanut allergy was 18.6 percent among those who had avoided peanut throughout LEAP and LEAP-On.
“These new results build on the landmark findings from the LEAP study, which was the first to show that early introduction of peanut can prevent the development of allergy to it,” said NIAID Director Anthony S. Fauci, M.D. “They demonstrate that regular consumption of peanut-containing foods beginning in infancy induces peanut tolerance that persists following a year of avoidance, suggesting the lasting benefits of early-life consumption for infants at high risk of developing peanut allergy.”
Led by Gideon Lack, M.D., of King’s College London, the LEAP-On study enrolled 556 LEAP participants: 274 children who had regularly consumed peanut-containing foods from infancy to age 5 and 282 who had avoided peanut during the same period. Researchers then asked the original peanut-consumers and the original avoiders to avoid peanut consumption for one year. At the end of the avoidance period, the researchers assessed peanut allergy at age 6.
“The findings clearly demonstrate that the majority of infants who had consumed peanut in the LEAP study did in fact remain protected after they stopped eating peanut for 12 months, and that the protection was long-lasting,” said Dr. Lack.
Adherence to peanut avoidance was high overall, as assessed with a questionnaire and confirmed by quantifying peanut protein in dust samples collected from participants’ beds. Some of the original peanut-consumers did occasionally consume peanut during the year-long avoidance period, but intermittent, low-dose peanut consumption did not result in new cases of peanut allergy.
“The findings suggest that children who have regularly consumed peanut-containing foods from infancy to age 5 as a peanut allergy prevention strategy can safely switch to consuming peanut as desired as part of a normal diet,” said Daniel Rotrosen, M.D., director of NIAID’s Division of Allergy, Immunology and Transplantation. “We expect that many will continue to enjoy peanut-containing foods consumed regularly, and others will maintain their non-allergic status with moderate intervals of diminished or no peanut consumption.”
The investigators are planning longer-term follow-up of the study participants to assess whether the benefits of regular early-life peanut consumption are maintained over many years when followed by consumption of peanut ad lib, or as much and as often as desired.
“Further studies are needed to determine the longer term effects of intermittent ad lib peanut consumption following introduction early in life,” noted Dr. Lack. “Parents of infants and young children with eczema or egg allergy should consult with an allergist, pediatrician or their general practitioner prior to feeding them peanut products.”
This work was funded by NIAID, NIH, under award numbers NO1-AI15416, UM1AI109565, HHSN272200800029C and UM2AI117870. Additional support was provided by Food Allergy Research & Education and other sources. Data and analyses from the LEAP-On study are publicly available on TrialShare


NIAID conducts and supports research—at NIH, throughout the United States, and worldwide—to study the causes of infectious and immune-mediated diseases, and to develop better means of preventing, diagnosing and treating these illnesses. News releases, fact sheets and other NIAID-related materials are available on the NIAID website.
About the National Institutes of Health (NIH): NIH, the nation's medical research agency, includes 27 Institutes and Centers and is a component of the U.S. Department of Health and Human Services. NIH is the primary federal agency conducting and supporting basic, clinical, and translational medical research, and is investigating the causes, treatments, and cures for both common and rare diseases. For more information about NIH and its programs, visit www.nih.gov.