Next-generation sequencing has critical applications in virus discovery, diagnostics, and environmental surveillance. We used metagenomic sequence libraries for retrospective screening of plasma samples for the recently discovered human hepegivirus 1 (HHpgV-1). From a cohort of 150 hepatitis C virus (HCV)–positive case-patients, we identified 2 persons with HHpgV-1 viremia and a high frequency of human pegivirus (HPgV) viremia (14%). Detection of HHpgV-1 and HPgV was concordant with parallel PCR-based screening using conserved primers matching groups 1 (HPgV) and 2 (HHPgV-1) nonstructural 3 region sequences. PCR identified 1 HHPgV-1–positive person with viremia from a group of 195 persons with hemophilia who had been exposed to nonvirally inactivated factor VII/IX; 18 (9%) were HPgV-positive. Relative to HCV and HPgV, active infections with HHpgV-1 were infrequently detected in blood, even in groups that had substantial parenteral exposure. Our findings are consistent with lower transmissibility or higher rates of virus clearance for HHpgV-1 than for other bloodborne human flaviviruses.
The development of next-generation sequencing methods and related molecular tools has greatly increased the pace of virus discovery (1,2), and these methods have become widely used for the investigation of novel zoonotic infections. Examples in which next-generation sequencing methods have identified novel viral agents associated with disease outbreaks include severe fever with thrombocytopenia virus (SFTV) in China (3), a bunyavirus in the United States (4), and a novel rhabdovirus in Central Africa (5). Using such methods, 2 authors of this study (A.K. and P.S.) recently described a novel flavivirus, distantly related to human pegivirus (HPgV, formerly described as GB virus C or hepatitis G virus) but with several genome attributes, such as a type IV internal ribosomal entry site (IRES), possession of a core-like protein, and a heavily glycosylated envelope protein that show greater affinity with hepatitis C virus (HCV) and other members of the genus Hepacivirus (6). The virus, named human hepegivirus 1 (HHpgV-1) to reflect these mosaic characteristics, was detected in 2 blood recipients and as a persistent infection in 2 persons with hemophilia exposed previously to nonvirally inactivated factor VIII/IX concentrates.
Following the example of the previous use of metagenomic libraries to detect human pathogens (7–9), we developed a bioinformatics-based method to screen existing libraries for HHpgV-1 and HPgV sequences from previously tested persons in the United Kingdom, enabling viremia frequencies in different risk groups to be estimated. Samples used to generate libraries with and without HHpgV-1 sequences were retrieved and used to validate the specificity and sensitivity of a newly developed reverse transcription PCR (RT-PCR)–based method for sample screening. This method was subsequently used to screen samples from patients extensively treated with nonvirally inactivated factor VIII or IX concentrates and controls.

RNA was extracted from 200 μL of pooled or 20 μL of individual plasma by using the RNeasy Kit (QIAGEN, Hilden, Germany) and recovered in 30 μL of nuclease-free water. First-strand cDNA was synthesized from 6 μL of recovered RNA by using Superscript III reverse transcription (Life Technologies, Carlsbad, CA, USA) with random hexamer primers. Nested PCRs were performed by using GoTaq DNA polymerase (Promega, Madison, WI, USA) and the primers described in Table 1. First round reactions were obtained by using 2 μL of cDNA as a template under these conditions: 40 cycles of 18 seconds at 94°C, 21 seconds at 50°C and 60 seconds at 72°C, and a final extension step of 5 minutes at 72°C. Second round reactions were done by using 2 μL of first round template under identical conditions.

Metagenomic datasets used in this study had previously been sequenced on the Illumina platform from sequencing libraries synthesized with either the NEBNext mRNA Sample Prep Kit for Illumina (New England Biolabs, Ipswich, MA, USA), or the NEBNext Ultra Directional RNA Library Prep Kit for Illumina (New England Biolabs) with modifications to the manufacturer’s protocols (10). Datasets in .bam format were depleted of human reads by using the bowtie method to map them to the HG19 human genome and convert them to fasta files by using custom awk scripts, then were piped to the blastn program (BLAST+ version 2.2.25; http://blast.ncbi.nlm.nih.gov/Blast.cgi) by using a nucleotide database of all GenBank viral reference genomes and the initial HHpgV-1 variant, AK-790 (GenBank accession no. KT439329). All hits with E values <0.01 were accepted. Datasets containing HHPgV-1 or HPgV-1 sequence data were subjected to a custom-made assembly pipeline by which reads were trimmed of low PHRED quality bases (QUASR, Sourceforge,http://wwwsourceforge.net) and adaptor sequences, before virus reads (identified by using blastn) were assembled by using Vicuna (14) and VFAT software (http://www.broadinstitute.org/scientific-community/science/projects/viral-genomics/v-fat).
RNA folding energies and ratios of non-synonymous to synonymous nucleotide substitutions (dN/dS) were calculated for consensus whole-genome sequences by using SSE version 1.2 (15). Complete genome sequences of HHpgV-1 and HPgV obtained in this study have been submitted to GenBank (accession nos. LT009476–LT009494).

We used the assembled sequence of AK-790 as a reference to screen libraries of metagenomic sequence reads derived from plasma samples from 120 HCV-infected persons (primarily infected through injected drugs), 36 persons infected with HIV-1 from sexual contact, and 30 persons who were co-infected with HCV and HIV-1 (Table 2). From these samples, a total of 3 sequence libraries contained HHpgV-1 sequences. However, only 2 reads were detected in sample D1212, and these were identical in sequence to those of D1220. Because of the possibility of extraneous contamination of either the sample position in the sequencer or of the sequence dataset (e.g., through misidentified tags), we provisionally considered D1212 to be HHpgV-1 negative. 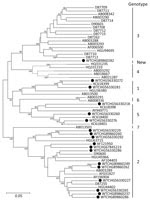 Figure 2. Maximum-likelihood (ML) phylogenetic analysis of human pegivirus sequences. NS3 region sequences (positions 4609–4880 as numbered in the AK-790 reference sequence, denoted here as tt790) were selected to overlap with sequences from...
By using the sequence reads, we obtained near-complete genome sequences of HHpgV-1 from the 2 positive samples (Table 2); their divergence, and other sequence characteristics were compared with those of the AK-790 prototype sequence (Figure 1; Table 3). Sequences were >99% complete with 5′ and 3′ ends approximately co-terminus with the HHpgV-1 prototype sequence (D1255 and D1220 lacked 12 and 23 bases at the 5′ end, respectively, and D1255 had a 23 base extension at the 3′ end). Sequences were ≈5% divergent from each other and from AK-790 over the length of the genome; most were at synonymous sites that left protein encoding unchanged (dN/dS 0.170–0.193). Sequences were also phylogenetically distinct from the larger dataset of variants sequenced in the nonstructural 3 (NS3) region (Figure 2; 6,16). Genomes of both HHpgV-1 variants showed bioinformatic evidence for genome scale–ordered RNA structure (17), with mean folding energy differences in the coding region of 7.6% and 8.3% for samples D1255 and D1220, respectively, which is similar to that calculated for AK-790 (7.6%) but lower than that calculated for HPgV (Table 3) and other pegiviruses (6).
The 2 HHPgV-1 samples originated from HCV-infected men enrolled in the OxBRC Prospective Cohort Study in Hepatitis C; samples were collected before initiation of antiviral treatment with telaprevir, pegylated-interferon, and ribavirin. Sample D1255 was collected from a person with a history of injection drug use, 50 years of age, 12 weeks before successful eradication of HCV genotype 1b virus; at the time of the study, he had remained under observation for a segment IV liver lesion, cirrhosis, and raised alphafetoprotein. Sample D1220 was collected from a patient 58 years of age who had genotype 1a HCV infection and died from decompensated liver failure 4 weeks into treatment. Both patients denied receiving blood or donor blood–derived products at the time of enrollment, and neither patient received blood products before sampling, according to hospital medical records and local transfusion service records.
As a control for the bioinformatic screening method, the same samples were screened for human pegivirus (HPgV) by using 60 whole pegivirus genomes from the US National Center for Biotechnology Information nucleotide database (http://www.ncbi.nlm.nih.gov/nuccore) as references for blastn filtering (Table 2). A total of 20 sample libraries contained at least 10 HPgV-matching reads and showed a median of 8,185 reads (IQR 5207–15,863), equating 17,000 to 19 million total sequenced bases (Table 3). Near-complete genome sequences could be assembled from 17 of the libraries, and reduced genome coverage obtained from the 3 samples with sequence read totals <100,000. The sequence characteristics of the HPgV sequences were typical for members of this virus group: moderate sequence divergence between each other and to the HPgV reference sequence (9%–13%), extremely low dN/dS ratios (0.022–0.049) and evidence for extensive internal RNA secondary structure (mean folding energy differences of 10.5%–13.2%; Table 3). Persons infected with HPgV originating from the UK were infected with genotype 2, and those from South Africa harbored genotypes 1 and 5 (Figure 1;18). The exception was patient 89860282, a UK resident man enrolled in the Short Pulse Antiretroviral Therapy at seroConversion trial who was infected with a candidate novel genotype pegivirus in addition to a clade B HIV-1.
In addition to being detected at a lower frequency than HPgV in groups that listed sexual contact and injected drug use as potential risk factors for infection (Table 2), read totals for HHpgV-1 were >2 SDs below mean totals for HPgV. This finding is consistent with a lower degree of viremia.

Validation of PCR for HHpgV-1

We compared sequences of the 2 HHpgV-1 samples with AK-790 and other group 2 pegiviruses (6) to identify conserved regions that might serve as binding sites for primers suitable for HHpgV-1 screening. A PCR based on primers hybridizing to a conserved region of group 2 pegiviruses (Table 1; 6) and those previously described (AK1/AK2) were validated by using the original samples identified as positive on bioinformatic screening, the suspected false-positive sample (D1212), and a selection of samples in which HHpgV-1 sequences were not detected (Table 4). To cross-validate the assay for HPgV detection, primers were designed based on regions conserved in the NS3 region of group 1 pegiviruses (human, primate, and bat pegiviruses; Table 1).
For groups 1 and 2 primers, PCR detection showed high concordance with bioinformatic screening (Table 4). By using group 2 primers, both samples that contained high numbers of HHpgV-1 reads on bioinformatic screening tested positive and the suspected negative sample (D1212) with only 3 reads was negative, as were the 20 controls in libraries that contained no HHpgV-1 sequences. Similar concordance between HPgV detection by PCR with library screening was observed in parallel (both methods identified 10 positive samples and 13 negative). The observed concordance between PCR- and bioinformatic-based screening methods for both virus groups validates both approaches for the wider screening for both virus groups in epidemiologic analyses.

We used pegivirus groups 1 and 2 PCRs to screen plasma samples from persons with hemophilia exposed to non–virally inactivated factor VII/IX concentrates and non–parenterally exposed controls (Table 2). Persons with hemophilia showed increased frequencies of HPgV viremia when compared with controls (18 of 195 compared with 1 of 50, respectively; Table 2), although this difference did not achieve statistical significance (p≈0.069 by Fisher exact test). One sample from a person with hemophilia was positive for HHpgV-1 by using group 2 primers; the amplicon sequence was 2.4%–4.8% divergent from AK-790, D1255, and D1220 between positions 4498–4896 in the AK-790 genome, with substitutions predominantly at synonymous sites. The sequence was phylogenetically distinct from the larger dataset of HHpgV-1 sequenced in the NS3 region (Figure 2; 17).

Samples from the Democratic Republic of Congo were kindly provided by the Metabiota consortium (C.F. Djoko; U. Tamoufe; M. Lebreton; B.S. Schneider; J.N. Fair; F.M. Tshala; P.K. Kayembe; J.J. Muyembe; S. Edidi-Basepeo; N.D. Wolfe).
E.B. is funded by the MRC as a Senior Clinical Fellow and the Oxford NHIR BRC. Investigators (D.B., C.L.C.I., M.A.A., P.P., R.B., P.K., A.T., and P.S.) working with the STOP-HCV study generated the metagenomic data from the Oxford HCV samples. M.A.A. is funded by the Oxford Martin School. W.F.G and C.P.S. are funded through a strategic award from the Biotechnology and Biological Sciences Research Council (BB/J004324/1). The Hemophilia Growth and Development Study is funded by the National Institutes of Health, National Institute of Child Health and Human Development, R01-HD-41224.