Antimicrobial resistance is a major public health problem in the United States and around the world.  New forms of resistance can easily cross international borders at the speed of jet travel.  The U.S. Department of Health and Human Services (HHS) and The European Commission (EC) established the Transatlantic Taskforce on Antimicrobial Resistance (TATFAR) in 2009 to improve international collaboration. TATFAR’s first progress report, released today, summarizes advancements during its first implementation period, 2011—2013.
In the U.S. and in the E.U., significant progress in reducing specific types of infections has been made.  However, the global problem of antibiotic resistance continues to escalate. Therefore, the original mandate of the taskforce that ran through 2013 has been extended for at least two additional years.
Advancing domestic efforts to combat antibiotic resistance, the FY 2015 President’s Budget requests $30 million for theDetect and Protect Against Antibiotic Resistance Initiative (known as the AR Initiative).  The AR Initiative is part of a broader CDC strategy to target investment and achieve measureable results through improving detection, preventing infections, and enhancing antibiotic stewardship.  Results from this funding will enhance collaboration between the U.S. and E.U., and future partners as they work together to fight the global threat of antibiotic resistance.
Learn more about TATFAR or read the progress report.


Detect and Protect Against Antibiotic Resistance

CDC’s Initiative to outsmart this threat

It’s been called public health’s ticking time bomb. Antibiotic resistance—when bacteria don’t respond to the drugs designed to kill them—threatens to return us to the time when simple infections were often fatal. Today, antibiotic resistance annually causes more than 2 million illnesses and 23,000 deaths in the United States. Tomorrow, if it continues on its current course, could be even worse:

We need to outsmart antibiotic resistance—now. The Detect and Protect Against Antibiotic Resistance Initiative (known as the AR Initiative) gives us a good head start. The 2015 President’s Budget requests $30 million annual funding level for 5 years for the AR Initiative—part of a broader CDC strategy to target investment to achieve measureable results in four core areas: 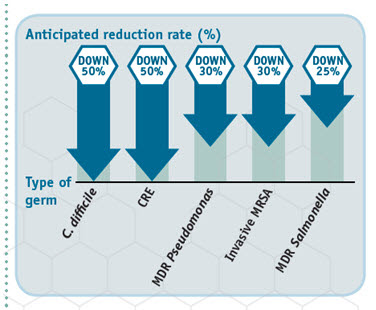