May 21, 2014
We are pleased to announce the latest communication campaign under the Centers for Disease Control and Prevention’s (CDC) Act Against AIDS initiative. This new national HIV prevention campaign, Start Talking. Stop HIV., was created by and for gay and bisexual men. It promotes open communication about a range of HIV prevention strategies for sexual partners. The campaign is designed to inspire practical, lifesaving conversations among gay and bisexual men, who continue to be the population most severely affected by HIV in the United States. This multi-faceted campaign was developed in consultation with 500 men of multiple ages from different racial and ethnic groups from across the United States. It is based on research that shows communication between sexual partners is associated with reduced risk behavior and increased HIV testing and HIV status disclosure.
Start Talking. Stop HIV. features messages that engage, inspire, and spark conversations between sexual partners and provides gay and bisexual men with practical tools and tips for bringing up important HIV prevention topics like:
The campaign will initially launch in south Florida, a region with high HIV prevalence among gay and bisexual men. Start Talking. Stop HIV. will roll-out in other cities during PRIDE events throughout the year. Campaign images and messages will appear in mobile, online, and national and local print advertising and will be the focus of a national media relations effort to generate print and broadcast news stories.
You can watch exclusive, behind-the-scenes footage of the Start Talking. Stop HIV. campaign and public service announcements on the campaign website.
You can support the campaign and increase conversation about HIV by: 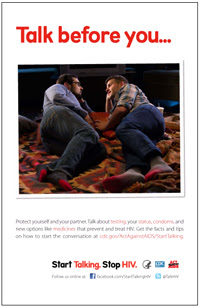 Thank you for your efforts to combat HIV and for your continued support of CDC and Act Against AIDS.
Publicado por salud equitativa en 8:12