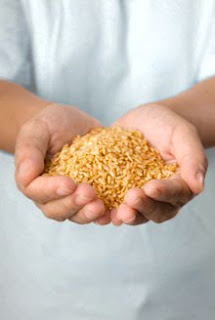 Type of Rice Linked to Diabetes Risk
Think twice before eating white rice? It might be wise, new research suggests. A large study reports that people who eat more white rice are at increased risk for type 2 diabetes, whereas those who eat more brown rice have less risk.

Type 2 diabetes—previously known as adult-onset diabetes—is one of the fastest growing health problems in Americans of all ages. Being overweight or inactive boosts the risk for the disease. So does a family history of diabetes, older age and certain ethnicities. Earlier studies have hinted that increased consumption of refined carbohydrates, including sugary foods and white breads, might also raise the risk.

Research suggests that whole-grain foods like brown rice could reduce the likelihood of diabetes. To create white rice, brown rice must be milled and polished, which removes most of its vitamins and minerals. Milling also strips away most of its fiber—a compound that might help to deter diabetes by slowing the rush of glucose into the bloodstream.

In a new study, researchers at the Harvard School of Public Health and Brigham and Women’s Hospital analyzed rice consumption and diabetes risk among nearly 200,000 people who had participated in 3 large studies of nurses and other health professionals. Every 2-4 years, the participants completed questionnaires about their diet, lifestyle and health conditions. During 14 to 22 years of follow-up, about 5,500 cases of type 2 diabetes arose among participants. The research was funded in part by NIH’s National Cancer Institute (NCI) and National Institute of Diabetes and Digestive and Kidney Diseases (NIDDK).

In a paper published on June 14, 2010, in the Archives of Internal Medicine, the researchers reported that frequently eating white rice increased the risk of type 2 diabetes. Those who reported eating at least 5 weekly servings of white rice had a 17% percent higher risk than those who ate less than 1 serving per month. In contrast, those eating at least 2 weekly servings of brown rice had an 11% lower risk of developing type 2 diabetes than those eating less than 1 serving per month. The findings held even after scientists adjusted for several factors that might influence the results, including age, weight and family history of diabetes.

The researchers calculated that replacing just one-third of a typical daily serving of white rice with the same amount of brown rice might reduce the risk of type 2 diabetes by 16%. The same replacement with other whole grains, such as whole wheat and barley, could lead to a 36% reduced risk, the scientists estimated. The current Dietary Guidelines for Americans recommend that at least half our carbohydrates come from whole grains.

The researchers note that a potential limitation of their study is that the analyses were based on participants’ self-reported intake of brown and white rice, which may not be accurate. However, they note that the large number of people studied, and the consistent results across all 3 study groups, add validity to the findings.

“Rice consumption in the U.S. has dramatically increased in recent decades,” says lead author Dr. Qi Sun. “We believe replacing white rice and other refined grains with whole grains, including brown rice, would help lower the risk of type 2 diabetes.”