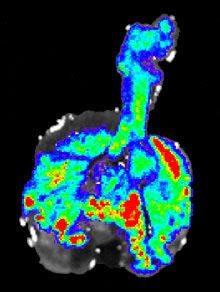 Lungs of an NS1-GFP infected mouse. Image courtesy of B. Manicassamy et al.

Tracing Flu Infections in Mice
Scientists have successfully tracked the progression of influenza virus infections within the lungs of mice. The accomplishment will lead to a better understanding of how flu infections spread and may suggest new strategies for combating them.


Influenza A virus, the type of flu that causes most seasonal and pandemic outbreaks, has been studied extensively in animal models and tissue cultures. However, the way it moves through the human respiratory system and infects cells isn’t well known. A major barrier to uncovering the course of infection has been the difficulty in visualizing viruses within the body (in vivo).

A team of researchers led by Dr. Adolfo García-Sastre at the Mount Sinai School of Medicine set out to express a reporter gene in influenza viruses that could be used to track their movement in vivo. Their work was supported by NIH’s National Institute of Allergy and Infectious Diseases (NIAID).

In the online early edition of Proceedings of the National Academy of Sciences on June 7, 2010, the team reported creating a recombinant influenza A strain carrying a green fluorescent protein (GFP) reporter gene. The reporter gene was placed in the NS segment of the influenza genome.

The new NS1-GFP virus infected and replicated well in mouse lungs, although it was less pathogenic than the wild type virus, the form that typically occurs in nature. Using the fluorescence as a marker, the researchers traced the course of infection in mouse lungs and found that it started in areas close to the large airways (near the trachea) and later spread to deeper sections of the lungs. In addition to epithelial cells, a large proportion of immune cells were GFP positive, suggesting active infection of these cells.

The scientists tested the effects of 2 influenza inhibitors on the movements of the virus. Treatment with oseltamivir dramatically reduced influenza infection in all cell types. Amantadine treatment more efficiently blocked infection in specific immune cells.

The new NS1-GFP strain can be used in future studies to answer new research questions. “This system will allow researchers to easily track viruses during immune responses, as well as to quickly evaluate the impact of potential therapies on influenza pathogenesis,” García-Sastre says.