Progress Toward an Artificial Liver Transplant 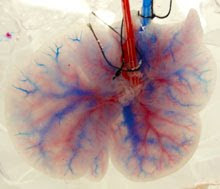 Progress Toward an Artificial Liver Transplant
Liver transplantation is currently the only available treatment for severe liver failure, but there aren’t enough donors to fill the need. Researchers have now made transplantable liver grafts for rats that may point the way toward a successful liver transplant substitute for humans.


The decellularized livers retain their networks of blood vessels. Image courtesy of B.E. Uygun. Your liver's job is to help fight infections and clean your blood. It also helps digest food and stores energy for when you need it. People needing a liver transplant are placed on a national waiting list kept at the United Network for Organ Sharing. Their blood type, body size and severity of sickness all play a role in when they’ll receive a liver. Whole livers can come only from people who have just died. Currently, there’s an estimated shortfall of about 4,000 livers per year.

Liver cell transplantation has shown some promise, but has limited uses. To be successful, an artificial transplant must be sufficiently large to provide enough liver function. That requires a network of small blood vessels—called a microvascular network—to transport oxygen and nutrients throughout the structure.

Decellularization—the process of removing cells from a structure but leaving a scaffold with the architecture of the original tissue—has shown some success in other organs. One group of scientists reported the decellularization of an entire heart that preserved the original architecture and microvascular network. A research team led by Dr. Korkut Uygun at Massachusetts General Hospital tried a similar approach for the liver. Their work was supported by NIH’s National Institute of Diabetes and Digestive and Kidney Diseases (NIDDK) and others.

In the June 13, 2010, advance online edition of Nature Medicine, the team explained the process they developed. They used a gentle detergent over 3 days to decellularize the liver while preserving its structure. A matrix of proteins remained behind to hold the liver’s shape. Using a dye, the researchers showed that the microvascular network in each eerily translucent liver was intact.

The researchers were then able to successfully introduce functional hepatocytes—a type of liver cell—back into the matrix. When they tested the recellularized matrix, they found that it carried out liver-specific functions at levels comparable to a normal liver.

Grafts transplanted into rats maintained their functional hepatocytes as well, for a few hours. The researchers note, however, that successful engineering of an entire functional liver will require other types of cells.

"As far as we know, a transplantable liver graft has never been constructed in a laboratory setting before," Uygun says. "Even though this is very exciting and promising, it is a proof-of-concept study only. Much more work will be required to make long-term functional liver grafts that can actually be transplanted into humans."

That said, the study highlights the feasibility of using this approach. There is currently a large pool of livers that are unsuitable for transplantation, including livers from people who have died of heart attacks. These could potentially be used to make decellularized liver matrices.