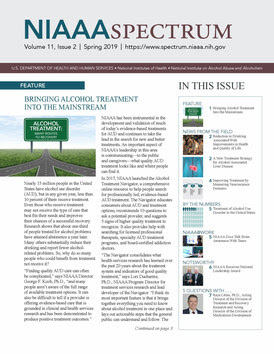 Bringing Alcohol Treatment Into the Mainstream
Nearly 15 million people in the United States have alcohol use disorder (AUD), but in any given year, less than 10 percent of them receive treatment. And even those who receive treatment may not receive the type of care that best fits their needs and improves their chances of a successful recovery. More...

Treatment of Alcohol Use Disorder in the United States
Alcohol use disorder (AUD) is a common but undertreated health issue in the United States. According to a recent nationwide survey, the National Survey on Drug Use and Health (NSDUH), nearly 15 million people age 12 and older had AUD in the past year. Of those individuals, it is estimated that less than 10 percent received any treatment.

News From the Field

Reduction in Drinking Associated with Improvements in Health and Quality of Life
In clinical trials for alcohol use disorder (AUD), abstinence and no heavy drinking days are currently the only end points approved by the U.S. Food and Drug Administration. However, many individuals who do not achieve these end points may still reduce their drinking to less harmful levels during treatment.
A New Treatment Strategy for Alcohol-Associated Liver Disease
Alcohol is involved in nearly half of all liver disease deaths in the United States each year. Alcohol-associated liver disease (AALD) now replaces hepatitis C viral infection as the lead cause of liver transplantation due to chronic liver disease.
Improving Treatment by Measuring Neuroscience Domains
Alcohol use disorder (AUD) is a common, heterogeneous disorder, and this heterogeneity drives the need for precision treatment.