By Dr. Ananya Mandal, MDMay 30 2019
Researchers at the Swansea University have shown that Manuka honey could be useful in treatment of deadly lung infections caused by antimicrobial resistant respiratory bacteria in cystic fibrosis (CF). The study titled, “Anti-pseudomonad Activity of Manuka Honey and Antibiotics in a Specialized ex vivo Model Simulating Cystic Fibrosis Lung Infection,” was published in the latest issue of the journal Frontiers of Microbiology.
Around 10,400 persons in UK suffer from CF that makes them vulnerable to different respiratory bacterial infections. Many of these infections are due to antimicrobial resistant bacteria says the CF Trust. Lord Jim O'Neill led a research that showed that antimicrobial resistance could lead to 10 million deaths each year by the year 2050. 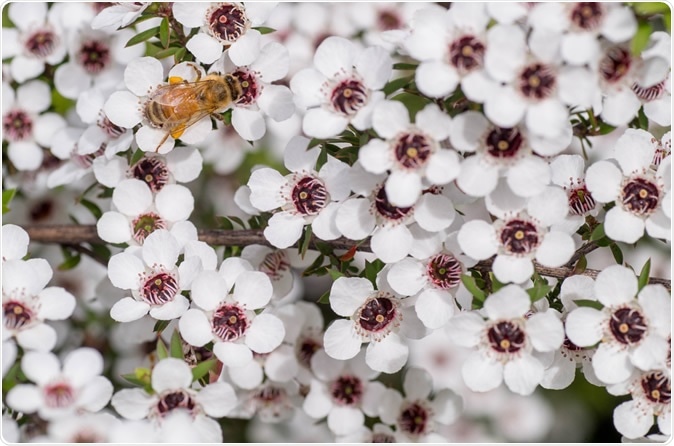 Honey Bee on Manuka flower. Image Credit: M Rutherford / Shutterstock
Researchers Dr Rowena Jenkins and colleagues conducted preliminary experiments that showed the efficacy of this honey in antimicrobial resistant infections in CF. The team used lung tissue from pigs for their experiment. They grew the bacterial infections in the lung tissues to mimic those seen in patients with CF. Then they used Manuka honey to treat these tissues.
Results revealed that the honey was successfully capable of killing antimicrobial resistant bacteria by 39 percent compared to 29 percent killing by antibiotics. When honey and bacteria were used together, the killing of the resistant bacteria reached 90 percent, write the researchers. The honey was used along with antibiotics such as “ciprofloxacin, ceftazidime, and tobramycin”.
Dr. Jenkins, Lecturer in Microbiology and Infectious Diseases at Swansea University, in a statement said, “The preliminary results are very promising and should these be replicated in the clinical setting then this could open up additional treatment options for those with cystic fibrosis infections. The synergy with antibiotics and absence of resistance seen in the laboratory has allowed us to move into the current clinical trial, investigating the potential for Manuka honey as part of a sinus rinse for alleviating infection in the upper airway.”
Researchers explain that antibiotics often fail in CF patients due to resistant infections caused by deadly types of bacteria including Pseudomonas and Burkholderia cepacia complex. These bacteria are often difficult to kill and eradicate because of their antimicrobial resistance. Patients of CF with these infections often are prevented from getting a successful lung transplant. They write, “Manuka honey is a natural antimicrobial agent that has been used for many decades in the treatment of chronic surface wounds with great success, particularly those infected with P. aeruginosa.”

Authors write the search for non-toxic and effective alternatives to antimicrobials in on. They add that honey has been used medicinally in several traditional methods of treatment for thousands of years. The team received funds from the Waterloo Foundation and The Hodge Foundation to study alternatives to antibiotic therapy in CF patients with lung infections.
Related - Comparisons of honey in terms of their antimicrobial activity
In the same journal earlier this year (February 2019), authors Sushil Anand and colleagues from The Pangenomics Group, School of Science, RMIT University, Melbourne, VIC, Australia, published an article called, “Antimicrobial Activity of AgastacheHoney and Characterization of Its Bioactive Compounds in Comparison With Important Commercial Honeys.”
The team also writes that with rise of antimicrobial resistance, there is an urgent need for alternative non toxic agents. They tested the antimicrobial efficacy of “Mono-floral Agastache honey produced from Australian grown Agastache rugosa” with tea tree honey, Manuka honey, Jelly bush honey and Jarrah honey.
They looked at the capacity of these honeys to prevent growth of organisms such as “Staphylococcus aureus (methicillin-susceptible and methicillin-resistant strains), Pseudomonas aeruginosa, and Escherichia coli”. They noted that compared to Agastachehoney, the MIC or minimum inhibitory concentration was higher for Super manuka and Jarrah honeys and lower for Tea tree honey. Staph was found to be more susceptible to these honeys compared to the other two organisms.
Catalase is an enzyme that renders a microbe more powerful. “Manuka and Jelly bush honeys retained their antimicrobial activity in the presence of catalase, indicating the presence of other antimicrobial compounds in the honey,” write the researchers. Authors conclude that these properties of the honeys make them an attractive alternative in wound care.
Sources:
Publicado por salud equitativa en 13:12