By Dr. Ananya Mandal, MDMay 30 2019
Two large studies have found that ultra-processed foods are associated with harmful effects on the body including obesity, cancer and heart disease. The researchers of the studies add that the high content of total fat, trans and saturated fats as well as the sugar and salt along with low fibre contents are associated with such adverse outcomes of these ultra-processed foods. These foods are also rich in vitamins and contain harmful additives such as sodium nitrite and titanium oxide which lead to a higher risk of hypertension say the studies. 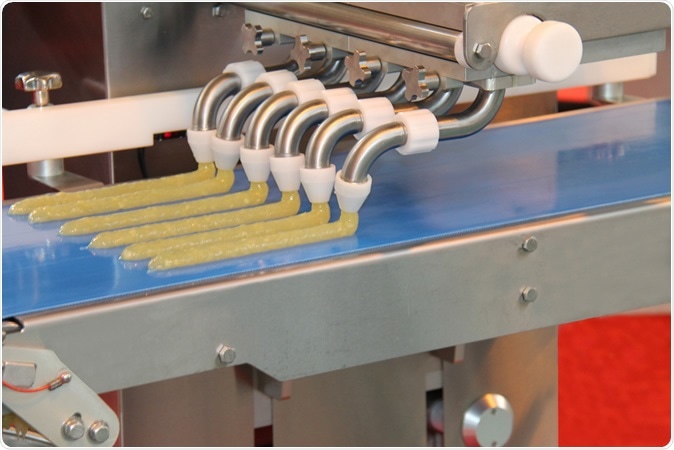 Image Credit: Daseaford / Shutterstock
The food classification system NOVA approved by health agencies such as UN Food and Agriculture Organisation classifies foods as;
Study 1
The first study came from researchers at the University of Navarra in Spain. They included around 20,000 adults, with an average age of 38 who answered detailed qustionnaires regarding their food habits. The risk of early death was raised by 62 percent among those who ate at least four portions of highly processed foods per day compared to those who consumed less than two.
This was the SUN study from the researchers at Spain, published in the latest issue of the British Medical Journal titled, “Association between consumption of ultra-processed foods and all cause mortality: SUN prospective cohort study”
The researchers explain that healthy diets include increasing consumption of whole fibres, fresh fruits and vegetables, fish, poultry, legumes, nuts etc. and reducing the consumption of fizzy, sugary drinks, ready-to-eat foods, processed meats, baked foods, salted and sugary snacks, sugary cereals, dehydrated soups and foods etc.
Maria Bes-Rastrollo, study leader said, “: Ultra-processed foods are made predominantly or entirely from industrial substances and contain little or no whole foods. They are ready to heat, drink, or eat.” They urge the governments to sit up and take notice of these harmful effects of ultra processed foods and take steps to control and regulate these foods. By 2024 UK is set to regulate calorie content of commonly consumed foods and reduce them by 20 percent.
Study 2
The second study came from researchers at the Paris-Sorbonne University. This study is titled “Ultra-processed food intake and risk of cardiovascular disease: prospective cohort study (NutriNet-Santé),” published in the same issue of the British Medical Journal.

This study involved over 105,000 French adults. They were followed closely for an average of six days to understand their consumption of various food items. Over 3,300 different food items were taken by the participants during the study period. On an average the participants were followed up for 5.2 years.
The results showed that for every 10 percent increase in consumption of ultra processed foods, there were a 13 percent increase in the risk of heart disease and an 11 percent rise in risk of diseases that cause strokes. Mathilde Touvier, a member of the team said in a statement, “The public should avoid these foods as much as they can. We need to go back to more basic diets.”
Authors concluded, “In this large observational prospective study, higher consumption of ultra-processed foods was associated with higher risks of cardiovascular, coronary heart, and cerebrovascular diseases.”
Accompanying editorial and expert speak
An accompanying commentary in the same issue of the journal said that both of these studies were observational. Thus they were not accurate proof that consumption of these foods could lead to these diseases and early death.
Professor Mark Lawrence, food expert of Deakin University in Australia wrote, “In the 10 years since Brazilian researchers coined the term ultra-processed foods, there has been a growing body of evidence associating consumption of such foods with poor diet quality, increased cardiovascular risk factors (eg, dyslipidaemia, hypertension), and adverse health outcomes such as obesity and metabolic syndrome... These findings add to growing evidence of an association between ultra-processed food and adverse health outcomes that has important implications for dietary advice and food policies. The dietary advice is relatively straightforward: eat less ultra-processed food and more unprocessed or minimally processed food.”
The editorial concludes, “Policy makers should shift their priorities away from food reformulation - which risks positioning ultra-processed food as a solution to dietary problems - towards a greater emphasis on promoting the availability, affordability, and accessibility of unprocessed or minimally processed foods.”
Prof Corinna Hawkes, director of food policy at City University London, in a statement said, “Governments must do more to comprehensively reduce the availability, affordability, and appeal of processed foods high in fats, sugars and salt. It is critical to pursue further research on the connection between food and health. There is a lot we do know but also a lot we have yet to learn. We need more and more studies to build up a bigger picture.”
Sources:
Publicado por salud equitativa en 13:15