Sunburn prevalence among US adults, National Health Interview Survey 2005, 2010, and 2015 - Journal of the American Academy of Dermatology

Sunburn prevalence among US adults, National Health Interview Survey 2005, 2010, and 2015 - Journal of the American Academy of Dermatology 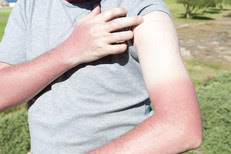 Sunburn indicates an overexposure to UV rays and is associated with an increased risk for melanoma, the most dangerous kind of skin cancer. A new study looks at how often adults in the United States experienced sunburns during 2005, 2010, and 2015 using data from the National Health Interview Survey. Each year, more than one third of adults experienced sunburn. Study results showed that a higher percentage of non-Hispanic white adults experienced sunburn compared with other racial/ethnic groups. Among all adults, sunburn increased significantly during 2005 to 2010. Groups with significant increases in sunburn included adults aged 50-59 years old and 60-69-years old, non-Hispanic whites, women, and those living in the South. More efforts are needed to help communities adopt strategies and programs to reduce UV exposure and increase sun protection.