By Lois Zoppi, BAMay 29 2019Reviewed by Kate Anderton, B.Sc. (Editor)
Researchers at the University of California, San Diego (UCSD) have uncovered a new genetic variant responsible for blood vessel dysregulation in the development of age-related macular degeneration (AMD), a retinal eye disease whose exact cause is yet to be discovered. The study was published in the journal Stem Cell Reports on 9th May 2019. 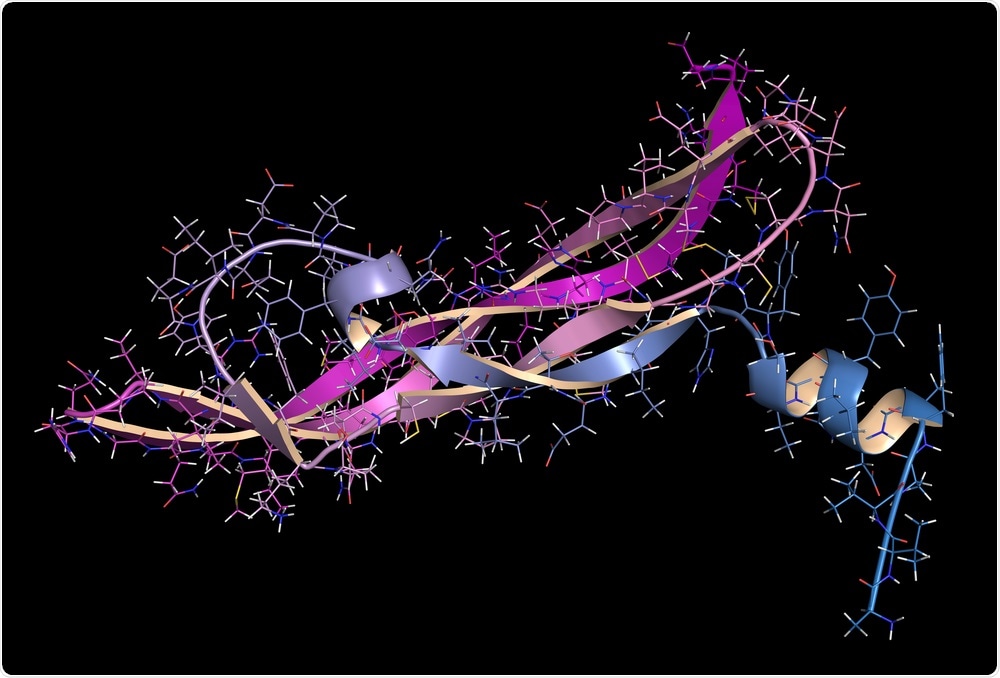 What is Age-related Macular Degeneration (AMD)?

Age-related macular degeneration is ranked the third most common cause of blindness after cataracts and glaucoma. The main risk factor for the condition is increasing age, but smoking, high blood pressure, and a family history of the condition can also increase a person’s risk of developing the disease.
Age-related macular degeneration causes the central field of vision to be distorted or lost due to light-sensitive cells in the macula (the part of the eye responsible for providing clear central vision) functionally abnormally when a network of support cells die.
Deposits, also known as drusen, form, and increase in number beneath the retina and cause angiogenesis, the process by which new blood cells are formed. Blood may leak from the new blood cells and cause damage to the retina, which is then less able to convert light into neural signals to trigger visual recognition in the brain.

Almost 20 different genes have so far been linked to the onset of AMD. In the new study, the researchers found that a genetic variation affecting the expression of the vascular endothelial growth factor (VEGF) gene was also important in AMD onset.
The VEGF gene encodes the VEGF-A protein, which is believed to be the main factor responsible for triggering the growth of blood vessels. Senior author of the study Dr. Kelly A. Frazer, a professor of pediatrics and director of the Institute for Genomic Medicine at UCSD School of Medicine, commented on the gene’s unexpected significance in the condition:

We didn’t start with the VEGF-A gene when we went looking for genetic causes of AMD, But we were surprised to find that, with samples from just six people, this genetic variation clearly emerged as a causal factor.”
Dr. Kelly A. Frazer

The aim of the study was to further investigate the possible genetic causes that contribute to the heritability of the disease. The researchers worked to “evaluate whether human induced pluripotent stem cell-derived retinal pigment epithelium (iPSC-RPE) cells can be used to prioritize and functionally characterize casual variants at age-related macular degeneration (AMD) risk loci.”

Induced pluripotent stem cells (iPSCs) are adult cells that have been genetically reprogrammed to become an embryonic stem cell. To carry out the study, researchers gathered skin samples from six people and converted their skin cells into iPSCs.
Using a mix of specific molecules and growth factors, the researchers were able to reprogram these skin cells into retinal cells. These reprogramed cells possessed similar physiological and molecular characteristics to native retinal cells.
The researchers then gathered molecular data from their retinal models and combined the data with data from 18 adults with and without age-related macular degeneration. The study described the process in detail.
“We generated RNA-seq, ATAC-seq, and H3K27ac ChIP-seq data and observed high similarity in gene expression and enriched transcription factor motif profiles between iPSC-RPE and human fetal REP.
“We performed fine mapping of AMD risk loci by integrating molecular data from the iPSC-RPE, adult retina, and adult RPE, which identified rs943080 as the probable causal variant at VEGFA.
“We show that rs943080 is associated with altered chromatin accessibility of a distal ATAC-seq peak, decreased overall gene expression of VEGFA, and allele-specific expression of a noncoding transcript.”
There are limited treatments for AMD, with therapeutic options including regular injections into the eye targeting the VEGF gene to control blood vessels in the retina, or photodynamic therapy, a type of phototherapy that uses light and photosensitizing chemicals to stop the deterioration of the eyesight from progressing.
These therapies indicated that VEGF did play a role in age-related macular degeneration, as Dr. Agnieszka D’Antonio-Chronowska, a researcher in Frazer’s lab and a co-author of the study, explained.

Since current AMD therapies work by inhibiting VEGF, we knew VEGF was involved in AMD. But, we were surprised that the causal variant results in decreased VEGFA expression prior to AMD onset, and this finding could potentially be relevant for the treatment of AMD using anti-VEGF therapeutics.”
Dr. Agnieszka D’Antonio-Chronowska, Co-author

The study claims that its findings are “relevant for the treatment of AMD, as anti-VEGF is the only currently approved treatment for “wet” AMD that shows choroidal neovascularization. While this treatment improves symptoms that are driven by the growth of blood vessels […] it is not clear that it stops the progression of the disease.”
The UCSD researchers believe that their new study “provides a potential mechanism underlying the association of the VEGFA locus with AMD.”
Sources:
Eye in a Dish Takes Unblinking View of Macular Degeneration’s Genetics. genengnews.com.
Smith, E. N, et al. (2019). Human iPSC-Derived Retinal Pigment Epithelium: A Model System for Prioritizing and Functionally Characterizing Causal Variants at AMD Risk Loci. Stem Cell Reports. doi.org/10.1016/j.stemcr.2019.04.012.
Publicado por salud equitativa en 10:10