By Dr. Ananya Mandal, MDMay 30 2019
A researcher from the Florida State University has found that gender inequality in all the U.S. states could mean adverse health outcomes. The study titled, “Structural Sexism and Health in the United States: A New Perspective on Health Inequality and the Gender System,” was published in the latest issue of the American Sociological Review. Her work has been also published in Social Forces and Social Science and Medicine. 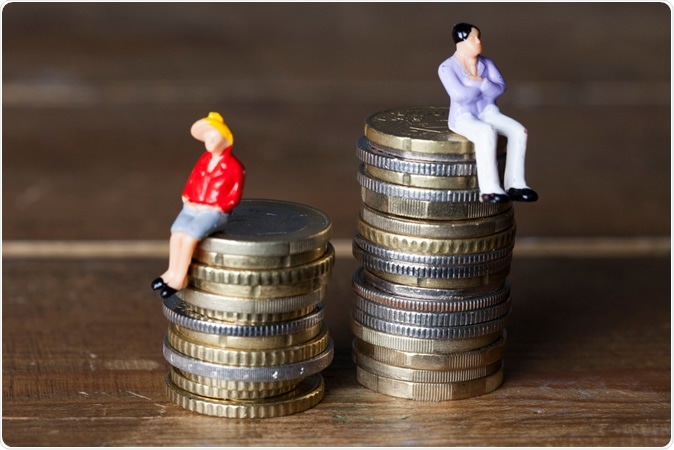 Gender equality. Image Credit: Ink Drop / Shutterstock
Researcher Patricia Homan, Assistant Professor of Sociology and an Associate of the Pepper Institute on Aging and Public Policy at Florida State University, developed a model for structural sexism to check the impact of gender inequality on health. She explained, “Researchers have known for decades that the experience of being sexually harassed or discriminated against can have a harmful effect on a woman’s health. But much less is known about the broader health consequences of living in a social environment where power, resources, roles and opportunities are unequally distributed along gender lines.”
For her study Homan explained that she established a method to measure structural sexism within the different US states as well as at home within heterosexual marriages. She then correlated it with health of the men as well as women. She gathered her data from the U.S. Census and the National Longitudinal Study of Youth including over 3300 young persons. She devised three levels of structural sexism classifying them as, “macro level (U.S. state), meso level (marital dyad), and micro level (individual)”.

To measure the structural sexism, Homan looked at four areas in the society – political, economical, cultural and physical or reproductive. The parameters included gender gap, wage gap associated with gender, gender difference in labour force participation and inclusion, prevalence of religious conservatives in the state that is associated with rigid gender roles, proportion of state legislature seats held by men, proportion of females in areas where there is lack of abortion providers. Choice of abortion and pregnancy as well as state level representation of women was considered to be important parameters.
Homan said, “Public health scholars and international human rights organizations consider reproductive choice and access to a full range of reproductive health care services to be a fundamental human right. It’s also considered a precondition for women’s equal citizenship and participation in social, political and economic life.”
Results revealed that structural sexism at the level of the state could mean poorer health outcomes for both men and women. Homan found that people who lived in states with highest structural sexism were more likely to suffer from chronic health conditions. These states include Utah, Wyoming, Mississippi, Louisiana and Oklahoma. By the age of 40 and 50 years, in these states, people reported worsening physical functions, she explained. Homan said, “This means that at the macro level structural sexism is universally harmful for population health.”

Among women facing higher levels of structural sexism in their home state, health problems were twice as much finds the study. These women, on an average looked seven years older according to their health profiles says Homan when compared to women living in states with lowest structural sexism for example in Maryland, California, Massachusetts, Vermont and Hawaii.
From the study, Homan believes that gender inequality is a public health problem. She said, “The first thing we need to realize is that gender inequality in the United States is not only a human rights issue, but also a public health problem. Therefore, gender equity policy is health policy.” She called for more women representation in politics, closure of the gender based wage gap and improvement in access to reproductive health care. She says that it is by removing gender inequality that health of the community can be promoted.
Related Study
Gender inequality measurement should focus on life satisfaction
Authors Gijsbert Stoet from the Department of Psychology, University of Essex, UK and David C. Geary from the Department of Psychological Sciences, University of Missouri, USA this January published a study titled, “A simplified approach to measuring national gender inequality,” in the journal PLOS One.
They wrote that the “Global Gender Gap Index” published first in 2006 is one of the best methods to measure national gender inequality and is widely used by policy makers and researchers. They provided a simpler method of measuring gender inequality. They used data from 134 nations between 2012 and 2016 to come up with their measurement. Some of the parameters they measured include, “disadvantages in children’s basic education, life satisfaction, and healthy life span.”
They write that the GGGI measures four parameters, “1) economic participation and opportunity, 2) educational attainment, 3) health and survival, and 4) political empowerment.” The authors have come up with the Basic Index of Gender Inequality (BIGI) which looks at “the ratio of women to men on three core dimensions of life; 1) Educational opportunities in childhood; 2) Healthy life expectancy (the number of years one can expect to live in good health); and, 3) Overall life satisfaction.”
The authors concluded, “...resolving gender inequality is only part of what is needed to ensure that all people can reach their full potential; overall gender parity on its own is not sufficient, because it can simply mean that both men and women lack opportunities in different facets of life quality.”
Sources:
Publicado por salud equitativa en 13:14