Focus on Alzheimer's disease and dementia

One of the challenges of screening for cognitive impairment, especially in low-resource settings, is accounting for varying levels of literacy and education, as well as cultural differences. To meet that need, NIH grantee Dr. Joe Verghese created a picture-based memory impairment screen (PMIS) that he validated in India and also has begun testing in the U.S.
A picture-based memory impairment screen validated by an NIH-funded study in India (top) is being studied in the U.S. with U.S. appropriate images (bottom) to identify people whomay have cognitive impairment. 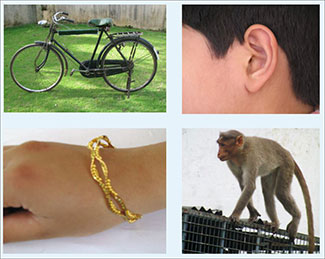 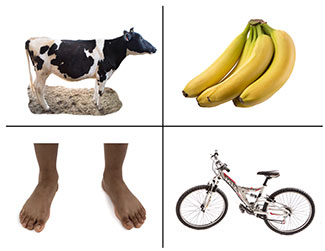 Images courtesy Dr. Joe Verghese
While more sophisticated studies are required to officially diagnose dementia, this tool is a useful way to flag people who are having cognitive difficulties or may be at risk of impairment, said Verghese, a professor of neurology and medicine at Albert Einstein College of Medicine. The tool uses four pictures - each from a different category, such as animal or body part. People are asked to identify the images, associate each with a category and then recall the pictures. It’s a four-minute test that non-specialists can administer.
Verghese is studying the PMIS in more than 300 people in Kerala, India through a National Institute on Aging (NIA) grant, funded under Fogarty’s brain disorders program. He successfully demonstrated it could discriminate those with dementia from those without. The validated tool was later tested at a dementia center with a racially and ethnically diverse population that Verghese runs in a New York City suburb. Researchers found it proved to be a reliable test that accounted for cultural, language and educational differences.
With another NIH grant, through a collaboration between the NIA and the National Institute of Neurological Disorders and Stroke (NINDS), Verghese is studying is studying a five-minute screen - dubbed the “5-cog” - to flag people who may have cognitive impairment so they can be referred for further evaluation. The screen will include a version of the PMIS and a test measuring how fast people walk. The latter evolved from his research validating motoric cognitive risk syndrome, in which older people develop a slower gait and complain of memory loss, signaling they may be at risk for dementia.
“The idea is that somebody else in the office gives the test and then passes the results on to the physician, the same way blood pressure and heart rate are taken by a nurse,” explained Verghese. “If we can show this works, this would be one more thing that could be done before the patient actually saw the physician.