By Ananya Mandal, MDNov 1 2018
A new study has shown that abstaining from cannabis or weed for just a month can result in improvement in memory and cognitive skills proving that weed can impair memory in the first place.
The results of the study,'One Month of Cannabis Abstinence in Adolescents and Young Adults Is Associated With Improved Memory', were published in the latest issue of the Journal of Clinical Psychiatry. 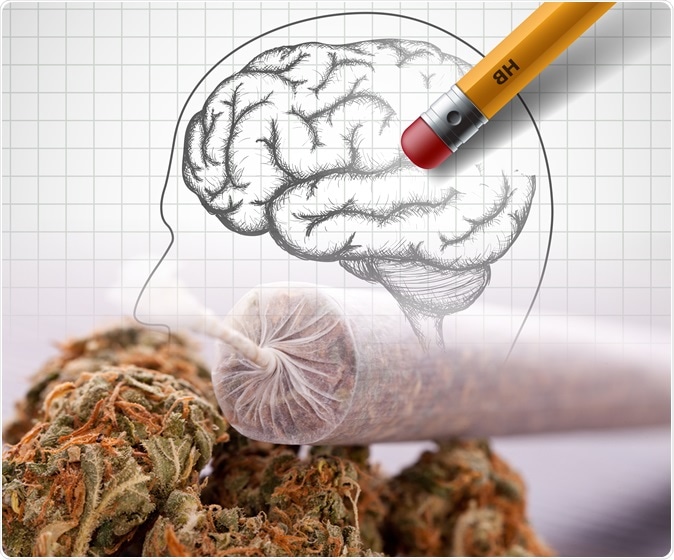 Image Credit: TrifonenkoIvan / Shutterstock
The study researchers tested 88 youngsters aged between 16 and 25 years who were regular cannabis users. They belonged to Boston, Massachusetts, in the US. They were asked to stop smoking pot during the month long trial. At the end of the study they were given a test and it was seen that their ability to recall and learn was enhanced compared to the baseline of the study while they were using cannabis.
The participants were cannabis users who smoked at least once a week and had agreed to give up for the 30 day trial. They were compared to another group of users who did not stop using. Other factors such as learning, mood changes, baseline cognitive abilities, frequency of cannabis use, intensity of use etc. were all accounted for among all the participants. At the start of the study they were all given tests to analyse their thinking and memory. At the end of the month of abstaining from cannabis the participants had a “modest but reliable” improvement in their memory and learning skills as seen in memory test scores.

Lead author Randi Schuster, director of neuropsychology at the Center for Addiction Medicine in the Massachusetts General Hospital department of psychiatry, said in a statement, “The ability to learn or ‘map down’ new information, which is a critical facet of success in the classroom, improved with sustained non-use of cannabis. Young cannabis users who stop regular – weekly or more – use may be better equipped to learn efficiently and therefore better positioned for academic success.” She added, “We can confidently say that these findings strongly suggest that abstaining from cannabis helps young people learn, while continuing cannabis use may interfere with the learning process.”
Authors have noted that over 13 percent of middle and high school students ate using cannabis and the rates are high among students of grades eight and twelve. They warn that adolescence is the time for brain development and maturation and the brain is more at risk of damage due to cannabis.
This study was supported by the National Institute on Drug Abuse and the Norman E. Zinberg Fellowship in Addiction Psychiatry and the Livingston Fellowship from Harvard Medical School.
Source:
https://www.psychiatrist.com/JCP/article/Pages/2018/v79/17m11977.aspx
Publicado por salud equitativa en 10:35