The Australian Academy of Science is urging parents to vaccinate their children against all strains of meningococcal disease, after a recent spike in cases in Adelaide and the death of a seven-year-old boy in south-west Sydney. 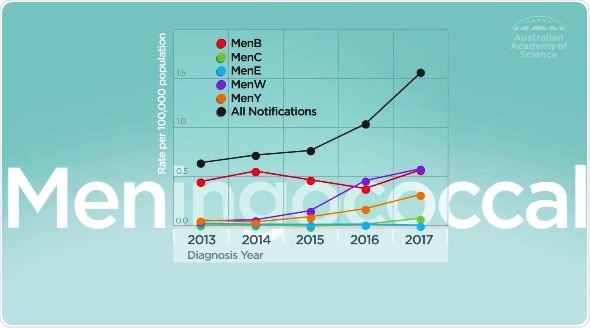 The call by the Academy comes as it releases a new video campaign, developed in partnership with the Australian Department of Health, to educate consumers and medical professionals about the disease.
Spring is a peak time for the disease with babies and children up to the age of five years and teenagers and young adults aged from 15 to 24 years among those at most risk of contracting the disease. People with suppressed immune systems, smokers and those living in crowded accommodation are also at greater risk.
Professor Robert Booy, from National Centre for Immunisation Research, University of Sydney, who features in the campaign, said there are five common strains of meningococcal disease in Australia - A, B, C, W and Y - with an increase in cases over the last few years.

When you consider my case, I was in an intensive care unit for 110 days and had over 60 operations, the financial burden of the diseases is so great. When we look at the cost of a vaccination, it’s safe and effective; I can only see prevention as being better than cure,”
Ms Ault-Connell, Director of Meningococcal Australia.

The videos have been rigorously fact-checked by Academy Fellows and feature some of Australia’s leading experts in the field including Professor Jodie McVernon from The Doherty Institute.