The fight against bacteria that are resistant to antibiotics is a crucial element of medical and microbiological research today. The phenomenon of antibiotic resistance itself is a part of the expression of the bacterial genome, and therefore can be expected to emerge in whatever situation antibiotics are used, and to increase with the number of drugs used.
This is how multidrug antibiotic resistance occurs in patients treated with several drugs, and how intractable microbial infections occur. It is for this reason that health care workers the world over must use antibiotics only when bacterial infections have been proved to be present and only when these infections cannot be properly treated without their use in a timely fashion.
This trend of antibiotic use only when absolutely required is termed antibiotic stewardship and is the goal towards which healthcare processes are tending within the UK.
The UK government requested a report by Lord Jim O’Neill, in 2014, on antimicrobial resistance (AMR) as well as the scarcity of new antimicrobial drugs in the market. This underlines the threat posed by AMR which is now one of the three major risks on the Global Risk Register, along with terrorism and climate change, causing about 700,000 deaths annually.
It is estimated that this figure could rise by an additional 10 million per year by the year 2050. The impact of this number may be better assessed if we understand that this is an incredible eight times more than the number of fatalities from road traffic accidents, and exceeds the total number of cancer deaths.
A leading research body, the European Center for Disease Prevention and Control (ECDC), reports that about 25,000 deaths occur from AMR in Europe each year, and two-thirds of these fatal outcomes follow infections by Gram-negative bacteria.
In those European nations that are at the bottom of the economic scale, less than one in a hundred patients obtain treatment from centers which can identify such microbes by microscopy or microbiologic techniques. Thus, a devastating epidemic of antimicrobial resistance is bound to ravage the world very soon, according to England’s Chief Medical Officer, Sally Davies. 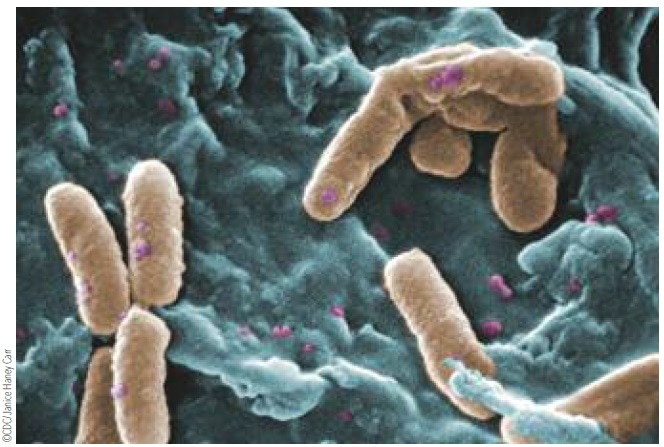 Pseudomonas aeruginosa is one of the ‘critical pathogens’ identified by the World Health Organization (coloured scanning electron micrograph [SEM]).
Mast is a private firm in the UK which has been synthesizing products for antibiotic susceptibility tests since 1957. It retains its leadership in this area, leveraging 60 years of development and manufacturing experience with new services termed mastpharma.
The purpose of these offerings is to make test devices which contain the drug being tested for antibiotic susceptibility, thus facilitating the commercial development of new antibiotics by making it easier to test for resistance.
The company can provide customized test devices to examine antibiotic susceptibility in vitro and to compare the efficacy of new drugs against currently useful compounds. It also provides multiple cartridge sets for testing to ensure compliance with the international standards of the European Committee on Antimicrobial Sensitivity Testing (EUCAST) and Clinical Laboratory Standards Institute (CLSI).

To control antibiotic susceptibility, it is necessary to find better ways to halt the spread of infections as well as to put up more effective controls on existing methods. One important aspect in this regard is knowledge of how physicians prescribe drugs in the UK, because several community trials focusing on the use of near-patient testing and antibiotic prescribing by GPs have resulted in prescription only to patients who are proved to be infected.
Ensuring best prescribing practices is a powerful part of antibiotic stewardship. It also reveals how essential it is for health professionals at all levels to continue learning and to expand the reach of such educational opportunities to include them all, making the struggle against AMR a common foe against which all of them can unite by useful action.

One future area of research is laboratory testing for new mechanisms of AMR. One possibility is a balanced mix of various rapid phenotypic, genotypic, point-of-impact and biomarker tests which are used so as to complement one another. Mast has come up with many combination disc tests for phenotypic testing to identify many mechanisms of AMR.
The importance of this is the increasing number of mechanisms emerging every year, and reference laboratory tests show not just the ‘big 5’ shown by Enterobacteriaceae which produce carbapenemase, but others within the same group mediated by single or combined enzyme actions or mutations which confer resistance.
Such an array of mechanisms associated with carbapenem resistance means that a single method will not be sufficient to provide adequate identification of antibiotic resistance, because of the range of carbapenemase structure, function and genetic variations.
It is therefore highly probable that phenotypic testing will continue to be a valuable means of gaining information on AMR, but the demand will be for a faster process to detect antibiotic susceptibility and the presence of AMR mechanisms using newer technologies such as whole-genome sequencing (WGS).
When this is fulfilled, this optimizes antibiotic use and permits infection prevention control measures to be put in place in a matter of hours rather than days. For instance, detecting colonized or infected patients is a necessary step in managing the patient and preventing the spread of infection. On the other hand, detecting infection and identifying the etiological agent is another vital measure, but this has not met with adequate diagnostic answers at present.
The Mast combination disc family is evolving constantly, with the addition of the Carba plus (D73C) which comprises five discs to test for Enterobacteriaceae-produced carbapenemases such as MBL, KPC and OXA-48-like enzymes. The latter can be improved by adding a temocillin disc which contains an MBL inhibitor as well, because this prevents the incorrect reporting of MBLs as OXA-48.
This particular mix of compounds has been shown to produce the highest balance of sensitivity and specificity and enable even microbes which produce small amounts of VIM to be detected. It is thus superior to and planned to replace the earlier DC70C despite the large-scale use of the latter at present.
Another expansion of the Mast combination disc range is simple paper devices such as the Mast ICT (D74), which was introduced to the market in April 2017 and has roused much interest. This is largely because the detection of carbapenemase activity in Pseudomonas and Acinetobacter species is still at an early stage unlike that in Enterobacterspecies.
The Mast ICT (D74) incorporates the indirect carbapenemase testing principles into a simple device, using an agent which renders the cell permeable and thus leaches out carbapenemase from test organisms which belong to the carbapenemase-producing organism (CPO) group.
This enzyme then breaks down an antibiotic (which also acts as an indicator) in the test device. The result is that this zone alone allows reporter organisms which are carbapenem-susceptible to grow, leading to a misshapen inhibition zone.
On the other hand, if the test organism is carbapenemase-negative, the reporter organism shows a circular zone of inhibition around the tip of the indicator. The use of this tool is designed to confirm a negative genotypic test by ruling out the presence of an unidentified marker. An example is shown in Figure 1.

Figure 2. Suggested workflow and summary chart.
The newest launch is the Mast D72C device released in September 2017, meant to progressively phase out the D68C and the D69C devices as the firm moves into producing a range of combination discs which keep up with current technologies as well as covering the maximum number of organisms and mechanisms possible using AMR markers today.
Available research continues to show increasing numbers of mechanisms in a number of microbes, including the currently known extended-spectrum beta-lactamase (ESBL) and AmpC-producing Enterobacter species, as well as others which also produce carbapenemases as a single mechanism of AMR or as part of a broader set of AMR mechanisms.
The problem of prescribing antibiotics which are effective against such infections is becoming increasingly difficult as a result of the many mechanisms and genetic variations found within the Enterobacteriaceae themselves.
The advantage of the D72C six-disc system is that it can be combined with other combination discs to distinguish between various members of this family or to confirm the presence of one such enzyme. Figure 2 shows one possible workflow for the use of the D72C in a laboratory setting.
Again, using the mastdiscs combi systems ensures that AMR testing accords with the newest EUCAST standards from July 2017. The D73C and D72C are both useful in testing pathways for the detection of ESBLs, AmpC and carbapenemase enzymes, simplifying the interpretation of these tests to detect which type of enzyme is present and so enabling better antibiotic prescription practices.
Table 1. Details of the mastdiscs combi AMR range. 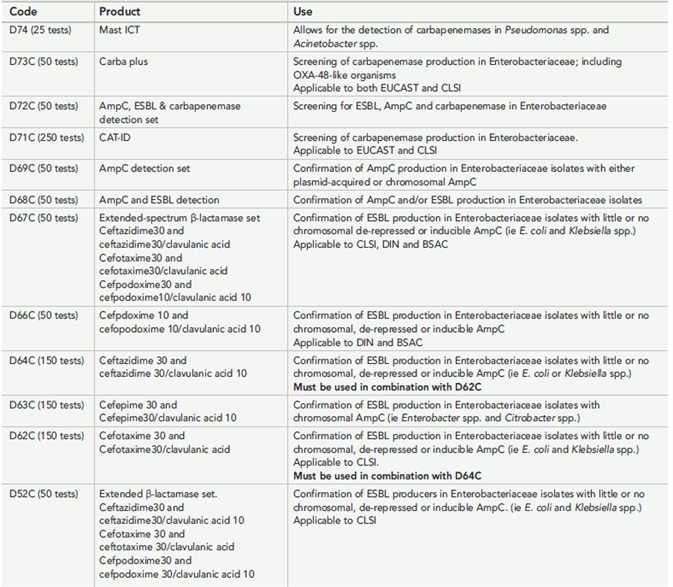 The unique features of Mast manufacturing and marketing lie in their impeccable reputation for innovation in the field of AMR, such as by producing matched combination disc sets of two which optimize the sensitivity and specificity of detection of antibiotic resistance mechanisms that can be picked up with these devices, and the strict quality control testing which ensures that results obtained from the use of the paired discs are accurate.
The obvious advantage to the use of these devices is the accurate identification of antibiotic susceptibility, which means that the carbapenems can be reserved for use in severe infections alone rather than being used indiscriminately.
Thus, broad-spectrum antibiotics are replaced by narrow-spectrum antibiotics which target the specific infections to be treated, and thus AMR is considerably prevented from emerging by not selecting for resistant organisms. Mast thus leads the combat against AMR by continuing to produce successful testing solutions in this area.

Mast is an independent world class manufacturer and supplier of diagnostic products for clinical, industrial and veterinary testing.
The parent company, Mast Group Ltd., has corporate headquarters in Bootle near Liverpool, UK. Mast also has Subsidiary companies in Reinfeld, Germany (Mast Diagnostica GmbH) and Amiens, France (Mast Diagnostic).
Manufacturing of the core range of microbiology products takes place in Bootle while other infectious disease and autoimmune diagnostics, using a variety of technologies, are produced in Reinfeld.
Mast offers its extensive product range through its own companies plus a global network of Distributors, for example, Mast has a long standing association with Davies Diagnostics in Johannesburg, South Africa.
Mast also supplies on a country by country basis, other quality diagnostic products from several internationally renowned manufacturers.
Sponsored Content Policy: News-Medical.net publishes articles and related content that may be derived from sources where we have existing commercial relationships, provided such content adds value to the core editorial ethos of News-Medical.Net which is to educate and inform site visitors interested in medical research, science, medical devices and treatments.
Last updated: May 16, 2018 at 4:53 AM
Publicado por salud equitativa en 7:09