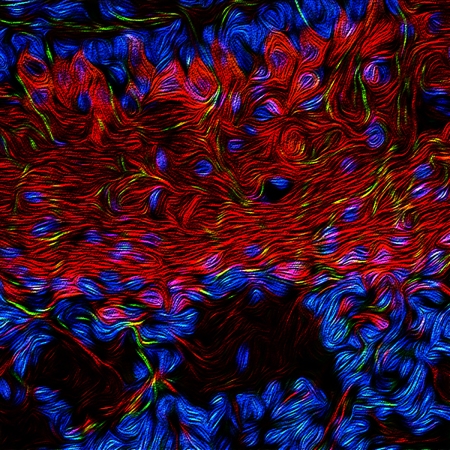 Credit: Jeremy McIntyre, University of Florida College of Medicine, Gainesville
You’ve probably learned the hard way about how the grocery list can go out the window when you go shopping on an empty stomach. Part of the reason is that our sense of smell intensifies when we’re hungry, making the aroma of freshly baked cookies, fried chicken, and other tempting goodies even more noticeable. And this beautiful micrograph helps to provide a biological explanation for this phenomenon.
The image, which looks like something that Van Gogh might have painted, shows a thick mesh of neurons in a small cross section of a mouse’s olfactory bulb, a structure located in the forebrain of all vertebrates (including humans!) that processes input about odors detected by the nose. Here, you see specialized neurons called mitral cells (red) that can receive signals from the hypothalamus, a brain region known for its role in hunger and energy balance. Also fluorescently labeled are receptors that detect acetylcholine signals from the brain (green) and the nuclei of all cells in the olfactory bulb (blue).
Studies suggest the hypothalamus relays information about a vertebrate’s current metabolic state and appetite to the olfactory bulb [1]. The mitral cells then integrate that information with incoming odor signals, influencing how intensely the odors are perceived by the organism.
Jeremy McIntyre, an NIH-supported researcher who studies the biology of smell at the University of Florida College of Medicine, Gainesville, took this image using a confocal microscope. After a bit of computer enhancement, he entered his shot in the University of Florida’s 2016 Elegance of Science competition, where it captured third prize.
Although you can’t see it in this static image, mitral cells and granule cells talk among themselves to determine what information goes onto the brain. When one of their signal-receiving arms activates, it can switch others off or on, much like circuits on a circuit board. The Florida team is now exploring this circuit board in an effort to map more precisely the lines of the communication among the hypothalamus, olfactory bulb, and nerve cells in the nose. Such research will be important in understanding how these interactions might contribute to eating disorders, obesity, or even just that craving for a cinnamon bun.
Reference:
[1] Neuromodulation in Chemosensory Pathways. McIntyre JC, Thiebaud N, McGann JP, Komiyama T, Rothermel M. Chem Senses. 2017 Jun 1;42(5):375-379.
Links:
Olfactory System (PubMed Health/NLM/NIH)
McIntyre Lab (University of Florida College of Medicine, Gainesville)
The Elegance of Science (Florida Museum of Natural History, Gainesville)
NIH Support: National Institute on Deafness and Other Communication Disorders