By Jeyashree Sundaram, MBA
Broken heart syndrome, also known as Takotsubo cardiomyopathy (TCM), is precipitated by some form of sudden acute stress in the body, either physical or emotional. Emotional stresses include tragic events such as a catastrophe, the loss of a loved one, a relationship breakup, or even happy events such as a wedding or a reunion. An instance of physical stress could be a recent surgery or acute brain injury. 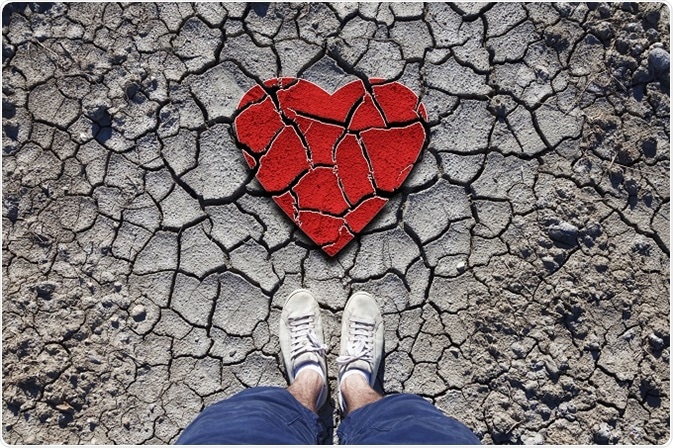 Credit: Robsonphoto/Shutterstock.com
A similar condition is known to happen in critically ill patients, but Takotsubo syndrome is a term reserved for this presentation occurring in people who are healthy but who develop acute coronary symptoms following severe physical or emotional stress; hence, this syndrome is also known as “stress-induced cardiomyopathy.”
In this condition, stress enlarges the left ventricle—the chamber that pumps blood to the rest of the body—leading to a temporary disruption in the pumping action of that part of the heart. This causes an increased risk of myocardial infarction (or heart attack).

Although the pathophysiological mechanisms leading to TCM remain unclear, about 75% of patients diagnosed with this condition were found to have experienced recent stress. A widely accepted theory is that an upsurge of catecholamines (stress hormones), owing to a sudden activation of the sympathetic nervous system, produces a negative impact upon the heart muscle.
Ischemia (or reduced blood supply) of the cardiac musculature is proposed to be another cause, occurring as a consequence of transient atherosclerotic plaque or multi-vessel coronary spasm. Microvascular dysfunction is still another possible cause, as well as genetic predisposition, though no associated mutation has yet been identified.

Myocardial “stunning” that occurs in the absence of other coronary disease is usually caused by an excessive release of catecholamines, prompted by a sudden stressful stimulus. Such an event causes the secretion of a large amount of the fight or flighthormones norepinephrine and epinephrine  into the bloodstream, which has a direct impact on the heart rate and force of pumping.
In a person subjected to stress, high adrenaline levels may damage the heart by inducing abrupt changes in the blood vessels or heart muscle cells, and thereby hindering efficient pumping in the left ventricle. The increased heart rate due to an activated sympathetic nervous system may play an important role in the pathogenesis of myocardial stunning following physical and emotional stress.

Research evidence shows that patients with broken heart syndrome had abnormal blood serum levels—about 7–34 times higher than the normal range—of circulating catecholamines following the development of this condition, and 2–3 times higher than that found in post-myocardial infarction patients. Stress neuropeptides are also present at abnormally elevated levels. Biopsy samples from patients of TCM subjected to histologic examination showed signs of catecholamine excess, such as contraction band necrosis (or cell death).
The apex of the left ventricle in TCM patients is said to be more vulnerable to these effects. The exact reasons are still to be elucidated.
Myocardial scintigraphy reveals an increased washout rate of the noradrenalin analog 123I-metaiodobenzly-guanidine (MIBG), which suggests this may be the cause for increased sympathetic activity in TCM patients.

Some researchers suggest that sudden stress causes coronary artery spasm, a temporary constriction in the musculature of the arteries that provide blood to the heart; this results in a hindrance to the supply of oxygen-rich blood to the heart. Even in the absence of obstructive coronary artery disease, coronary spasm results in ischemia. This type of occlusive spasm causes transmural ischemia reflected in ECG abnormalities such as ST-segment elevation.
Multivessel coronary spasm is another cause of TCM. Thus, multivessel coronary artery spasm could easily account for the diffuse Takotsubo defect. Although spasm plays a role in broken heart syndrome, some researchers suggest that it does not explain most cases.

Although obstructive coronary artery disease with more than 50% narrowing of an artery observed on angiography is ruled out in cases of TCM, some researchers think that the underlying cause of broken heart syndrome could be a ruptured coronary plaque. Acute coronary syndrome in the early stages is often associated with recanalization and spontaneous intermittent blockage of coronary arteries, due to the combination of vasoconstriction and clotting of blood. This could account for the lack of evidence of obstruction on angiography in TCM.
In Takotsubo cardiomyopathy, however, the affected heart muscle area is much larger than the normal area supplied by a single coronary artery. This neutralizes the possibility of transient coronary occlusion. A few studies suggest that transient occlusion could be the cause in patients with left ventricular apical akinesis (loss of movement), signifying that such TCM patients usually do not experience myocardial infarction.

Another accepted theory for the cause of Takotsubo cardiomyopathy is the dysfunction of tiny coronary arterioles (microvascular circulation) due to decrease in hormone levels occurring before or after menopause in women. These thus fail to supply adequate oxygen-rich blood to the heart.
Broken heart syndrome is found to be more common in women aged 50 years and above, or those in the post-menopausal period. The specific reason for this may be linked to the hormonal changes caused by menopause. Women have estrogen receptors in their bodies, which play an important role in inhibiting heart disease. After menopause, this protection is lost because of low estrogen levels, increasing their risk of broken heart syndrome.
Reviewed by Liji Thomas, MD.