By Sally Robertson, BScOctober 10, 2017
Researchers have discovered a compound that can trigger cancer cells to self-destruct, without causing any damage to healthy cells. 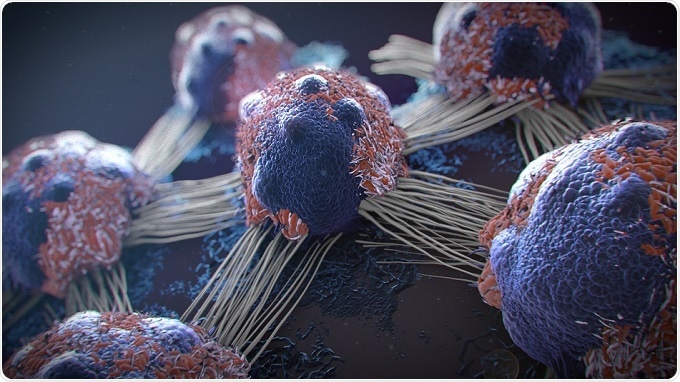 Credit: Javier Regueiro/Shutterstock.com
The team from Albert Einstein College of Medicine used the new treatment to target acute myeloid leukemia (AML) cells, but the approach could potentially treat other forms of cancer.
Senior author of the research, Evripidis Gavathiotis says:

Ideally, our compounds would be combined with other treatments to kill cancer cells faster and more efficiently--and with fewer adverse effects, which are an all-too-common problem with standard chemotherapies."

The new compound causes cancer cells to undergo programmed cell death or apoptosis, the process the body uses to destroy unwanted or abnormal cells.
Apoptosis is induced when a protein called BAX is activated by “pro-apoptotic” proteins in cells. The activated BAX molecules target and puncture mitochondria, the organelles in cells responsible for producing energy. Cancer cells, however, protect themselves against this process by producing “anti-apoptotic proteins” that suppress BAX activation.
What Gavathiotis and team have done is found a compound that binds to the activation site of suppressed BAX molecules to revive them. The researchers initially searched for small molecules that could do this by using computers to screen more than a million compounds for BAX-binding potential. After establishing the 500 most promising compounds, further analysis showed that a compound dubbed BTSA1 (short for BAX Trigger Site Activator 1) was the most potent BAX activator and quickly caused extensive apoptosis when added to human AML cells.

When the team proceeded to test BTSA1 in blood samples from patients with AML, BTSA1 triggered apoptosis of AML cells, without having any effect on healthy blood-forming stem cells.
Next, the researchers grafted human AML cells into mice to create animal models of AML, half of which were treated with BTSA1 while the other half were not (control group).
As reported in Cancer Cell, the control mice survived for an average of 40 days, while the mice treated with BTSA1 survived an average of 15 days longer (55 days), with 43% of the treated mice still alive after 60 days without exhibiting any signs of AML. The treated mice also did not display any signs of toxicity.
"BTSA1 activates BAX and causes apoptosis in AML cells while sparing healthy cells and tissues--probably because the cancer cells are primed for apoptosis," says Gavathiotis.
The team next intends to investigate how effective BTSA1 is when tested on animal models of other forms of cancer.
Source:
https://www.eurekalert.org/pub_releases/2017-10/aeco-ntc100317.php
Publicado por salud equitativa en 8:42