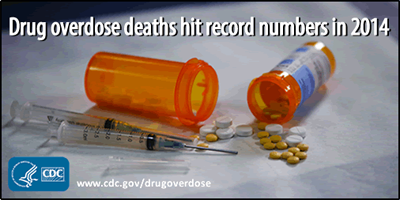 Overall drug overdose death rates have never been higher, and 6 out of 10 of these deaths involved opioids. Opioid overdose deaths, including deaths related to opioid pain relievers and heroin, increased significantly between 2013 and 2014, according to new data published today in CDC’s Morbidity and Mortality Weekly Report.
In 2014, there were 28,647 opioid overdose deaths, an increase of 14% compared to 2013 data. The increase is due in part to increases in heroin deaths and an emerging increase in deaths involving synthetic opioids, especially illicitly-made fentanyl. Also, deaths related to natural and semi-synthetic opioids, which include the most commonly prescribed opioid pain relievers, oxycodone and hydrocodone, continue to be involved in more overdose deaths than any other opioid type and increased by 9 percent from 2013 to 2014, representing 813 more deaths in 2014 than 2013.
In addition, heroin-related death rates increased 26% from 2013-2014, totaling 10,574 deaths in 2014. Primarily in the Midwest, Northeast, and increasing in the South, heroin may be cut with illicit fentanyl—with or without the user’s knowledge—in order to increase its effect. Over eighty percent of fentanyl drug confiscations in 2014 were concentrated in 10 states in these regions. Overdose deaths involving synthetic opioids such as illicitly-made fentanyl, increased by 80% from 2013–2014. Roughly 5,500 people died from overdoses involving synthetic opioids in 2014.
Past misuse of prescription opioid pain relievers is the strongest risk factor for heroin initiation and use. Increased availability, reduced price, and high purity of heroin appear to be major factors in the recent increase in heroin use.
What Can Be Done
These new data highlight the increasing trend of opioid abuse, and the urgent need to prevent opioid addiction and overdose deaths. The findings indicate four ways to prevent overdose deaths:
Learn More
MMWR: Increases in Drug and Opioid Overdose Deaths — United States, 2000–2014
CDC Prescription Drug Overdose Website
Map of drug overdose deaths by state (2013 and 2014)
Publicado por salud equitativa en 5:11